Made on Location: Free Willy [memoir] 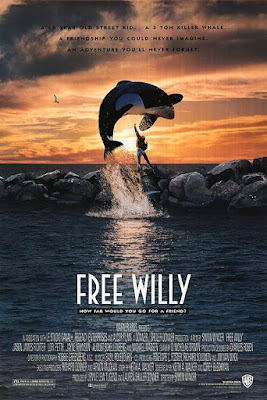 On any other Sunday that summer of 1992, on location up in Oregon for the filming of Free Willy, I’d be digging shamelessly into a steaming stack of blueberry hotcakes, purple compote oozing out all over the place. The Pig’n Pancake in Astoria were famous for them, and I usually couldn’t wait to wade in. I didn’t need—and didn’t want—the calorie breakdown to know the pancakes were pound packers, all buttery and crazy delicious, the kind of food I would normally eschew in favor of leaner fare like two eggs scrambled, cottage cheese on the side, one piece of rye toast.

The rules are different when you’re on location. When you’re on location, stressed to the max working as production coordinator on a big Warner Bros. movie like Free Willy, you (me) reward yourself (myself!) with a guilt-free weekend treat. My fiancé and I had walked the half mile down the road from the Red Lion Inn where the film crew was housed and we planned on walking the half mile back. A full mile. That had to count for something.

On that particular Sunday, instead of digging in, I sat there, letting the blueberry pancakes go cold and gelatinous. Feeling punky, my ravenous appetite replaced by an uneasy feeling, a queasy feeling, I wondered if I was hung over from the night before, when most of the crew had invaded the lounge at the hotel for Karaoke night. I’d watched my fiancé sing Stairway to Heaven—the long version—and run up at the end of the song with the studio teacher and Lori Petty—the actress played the whale trainer—pretending to mob him, as he stood there, mic in hand reaching to the sky like he was a rock star. We’d laughed until margaritas blew out our noses but I didn’t think I’d had all that much to drink.
I was right, I hadn’t had that much to drink. Or maybe I had but that wasn’t the source of that uneasy feeling, that queasy feeling. I was pregnant.
Overnight, my diet went from carbolicious pancakes to protein-rich hard boiled eggs that the caterers made just for me. I kept them in a plastic tub filled with water in a fridge in the production office and ate them with almost as much gusto as Cool Hand Luke. Margaritas became a distant memory and I quit smoking just like that, cold turkey. My p.a.’s sent me a bouquet of flowers. The teamster captain stopped barking at me. My boss still watched every move I made, but she smiled a bit more often as she did so.

The full story of my pregnancy is complicated; a month in I woke up one morning with slight cramps. Going to the bathroom, I eliminated a small bloody mass into the bowl. There were no cramps, it was the emotional pain, the horror, that had me crying out to my husband. He rushed me back to bed and called in sick for both of us. When I called the local doctor who’d confirmed my pregnancy, she said it sounded like a miscarriage. Was I in pain? No, I told her. She said I could come in for a D&C but if I was comfortable I could let nature take its course and I should see my own doctor when we got back to Los Angeles.
Miserable, but not in pain, my husband and I took a drive down the coast to Seaside. We took a walk, played arcade games, and tried to chase away the sadness.

By the time I returned home to Los Angeles, I was sad but resigned. We were okay. We could try again. My mother, seeing me for the first time in months, had other ideas.
“You still have a stomach!’’ she said. “I think you’re still pregnant.’’

My doctor agreed. Amazingly, miraculously, I was still pregnant! Whatever had happened back in that hotel bathroom, I was left with a baby in my belly. My baby. At age thirty-nine I had a baby boy, we had our little miracle. After a 22 hour labor and an emergency C-section, my boyo and I spent his first few days apart. He was up in ICU, a floor above me, and I lumbered down the hallway to the elevator to ride up to where they kept him plugged into an incubator. I had to scrub up like a surgeon just so I could breastfeed my beautiful little beanie baby. My husband had to scrub up just so he could touch his tiny hands.

When we all came home a few days later, healthy and happy, I dressed him in the onesie I’d hand-painted with the movie’s title “Free Willy” arcing above my rudimentary picture of a whale. Underneath I’d printed “Made on Location.”

I still have that onesie, packed away in a box, with the blue beanie they gave him at the hospital.

My beanie baby turns 25 next week. Lean and lanky, at least a head taller than his father, he’s too big to be anyone’s beanie baby any more. Except mine. He’ll always be mine.