Showing posts from 2014
Show all

Where nobody knows your name 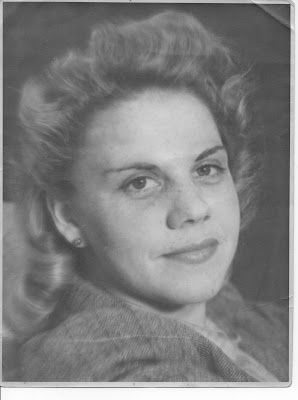 I've left more than participles dangling lately, skipping out on posting anything of substance here, including a serialized piece about my first marriage. Is that what I do when I get to the hard stuff, cut and run? I don't know about that, sometimes I've stayed too long. Arriving at the hard spot though, where I might have to look a little too deeply into my own contribution to that short-lived but ever-lasting failure, I've been taking a break. I'm still taking a break here but I'm writing daily for my Chapter1-Take1 book-to-movie blog . Here's a piece from that site, a response to the upcoming film Still Alice, that's more me than most. It's for anyone who has ever had to explain to a parent who they were. I saw the film Still Alice starring Julianne Moore and Kristen Stewart last week having scored a free ticket to a screening at the AFI film festival.  Oh, how I love me some free stuff. It was the last day of the week-long festival, held a
Continue Reading »

My favorite Veteran: A British Officer and a Gentleman 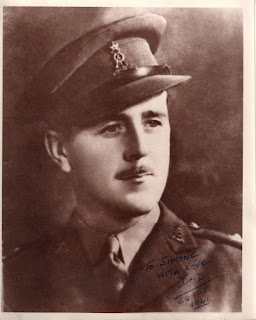 This is the man that stole my mother's heart. A pretty dashing example of "the greatest generation" in his prime. My mother brought a friend along on their first date because he had a reputation for being a cad - that's "player" in today's lingo - and she was trying to put him off. Rather than being put off, my dad charmed the friend as well sealing the deal. He was always a dazzling dancer and he probably rattled off some compliments in one of the four languages he was fluent in — besides English: French, Italian, Spanish and Arabic. He might even have wooed her in Swahili; self-taught, he had learned a smattering of that language, as well. In any case it worked. The next time he asked my mum out, they went solo. And the rest, as they say, is history. My family's history! My dad, Edward Good, part of the Greatest Generation, was born in Preston, Lancashire, in the north of England on July 28, 1915. He served with the British Armed Forces in Worl
Continue Reading »

Jake Gyllenhaal came out of the closet and other silly stuff

This is totally off topic but .... I had a dream last night (I've been reminded that there is nothing, nothing quite as boring as hearing about someone else's dream, unless you happen to be in it, which you're probably not soooo anyway) where I was writing in bed — I think I was working on my NaNoWriMo novel — when I looked up from my computer screen to see Jake Gyllenhaal coming out of my closet. I didn't want to intrude on his privacy and be a celebrity whore but I figured it was my bedroom after all so I said "Hey, sorry, but seeing as you're in my closet would you mind if I took your picture?" "Sure" he said. Then he turned around and pulled down his pajama bottoms, not all the way, just enough to reveal a tattoo on the left cheek of what I imagine Jake Gyllenhaal's butt must really look like — a little meaty and well defined — and smiled as I snapped the photo. When I went to post the picture on Twitter, anticipating all the retweet
Continue Reading »

Leaving Home: The Beginning I looked at the clock glowing on the dashboard; just after eleven... Leaving Home: Part Two He was tall and almost cool with aviators and a mustache that matched his shaggy golden brown hair... Leaving Home: Part Three The next couple of months blurred by. Phillip kept up, I don't know, I guess I'd call it a full frontal attack, but gently. First came the awkward acknowledgment that calling all over Vegas, hunting me down, was going too far. He neighed his whinny of a laugh. "I guess I got a little crazy." In return, did I tell him I didn't need crazy in my life? Did I tell him to scram, to get lost? Did I tell him we were on two separate journeys? Or instead did I say nothing? Did I find his fascination fascinating and blush demurely when he talked about the skin in the hollow of my throat or told me I looked pretty in pink? Funny how something like that, a compliment when you're craving one, can stop up a hole
Continue Reading »

#15 Euclid Street, Santa Monica Last week I posted the first part of this transition piece, the story of my first marriage, the tale that took me from my parents' home to my first place.  Leaving Home: The Beginning   is #15 of the On The Street Where I Live stories . You may want to read it before you read this. Here's the second installment. Leaving Home: Part Two He was tall and almost cool with aviators and a mustache that matched his shaggy golden brown hair. What made Phillip uncool was the way he had to shove those aviators up his slippery nose over and over, an act of uncoolness I could relate to all too well. The other thing that marked him as uncool was that he was full-time; a management trainee at Drug Star in Santa Monica. The rest of us that worked there, the young ones anyway, were part time. We were going to school, trying to be something else, trying to find a real place to start our careers. The drug store as a place to have a career? Definitely not coo
Continue Reading »

#15 Euclid Street, Santa Monica, California I've been married twice; one that didn't take, and one that did (knock on wood).This is about the one that didn't. You'll notice, it's only the beginning. I'm not sure how long it will end up being, as long — or as short — as it takes I guess. It's one of those transition pieces, the story that took me from my parents' apartment on Fourteenth Street in Santa Monica to a sweet little back house one short block away on Euclid, #15 of the On the Street Where I Live stories. If you've been here before you know this isn't a story in the fictional sense of the word, it's memoir. I'm of an age where I'm looking back, trying to figure out the route my life has followed. A few of you have showed an interest; thanks for that. Also, I hate titles; mainly because I'm no good at them. I think I'll call this one  Leaving Home I looked at the clock glowing on the dashboard; just after elev
Continue Reading »

The Star Factor: Jaclyn Smith, Max Factor and Me 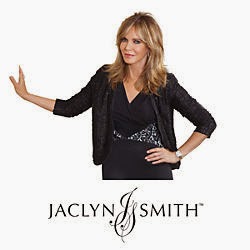 I came face to face with Jaclyn Smith the other day. Well, not exactly face to face. The former Charlie's Angels TV star was smiling down at me from a banner mounted above the clothing racks and shelves at Kmart. The racks stuffed with the cheaply made clothing lines of Sophia Vergara, Nicki Minaj, Adam Levine and Jaclyn Smith herself. "Hi there, Jaclyn," I thought to myself. "It's been a long, long time. Wow, are you ever looking good!"  I certainly haven't aged as gracefully. I was a twenty-something in-house copywriter at Max Factor, fond of red eyeglass frames and rainbow suspenders, when we met briefly back in the early 80's.  I spent my time trying to come up with color names, writing package copy and sales material.   And Jaclyn? She wasn't just the gorgeous spokesperson with the sultry voice who touted Max Factor's Epris fragrance—remember "Part of the art of being a woman is knowing when not to be too much of a lady,"
Continue Reading » 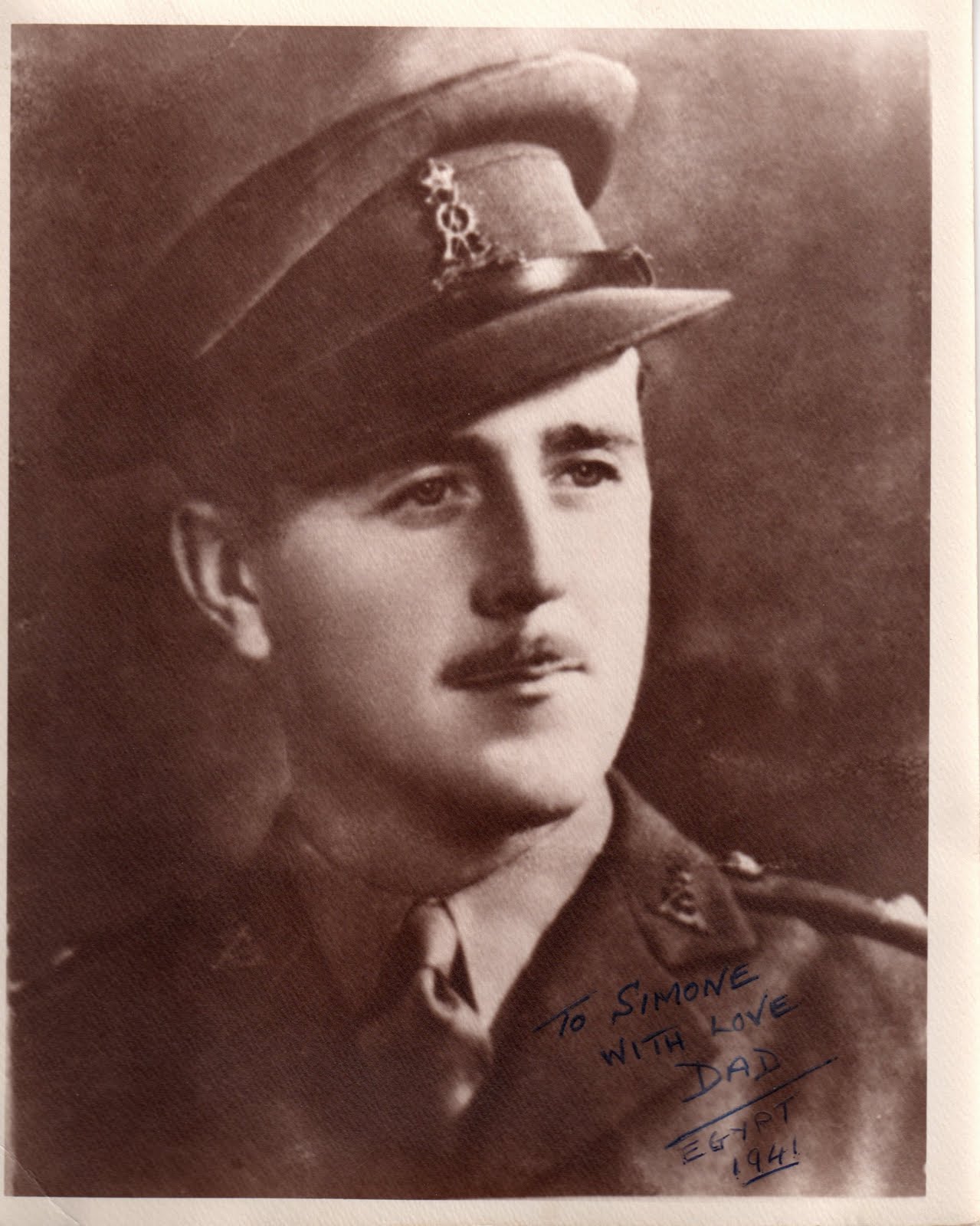 I thought he was God. Or Robert Young on Father Knows Best. Take your pick. Except that in my eyes my father was even more glamorous than Robert Young. I didn't know about God. He and my mother met at the tail end of World War II when he was home on leave in England. He wooed her in French, Italian, Spanish, and Arabic and he danced like a movie star. They fell in love and then he went away again, back to the western desert, back to the end of the war. Her family, her friends, all warned her about him. He was no good. He'd been around. She was only twenty. He was thirty. Forget him, he was too old. At thirty, her grandmother pronounced, he would have done everything already. He would be jaded, world-weary, they'd have little to share together. Forget him. She couldn't forget him. He sent stockings, Italian shoes, and letter after letter from the prisoner of war camp in North Africa where he was coaching the Italian prisoner's football team. He came home and th
Continue Reading » 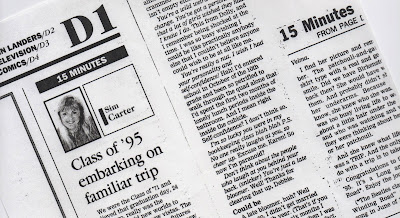 I'm deep into my high school head space right now - the last bit of memoir I wrote and posted this past week, "  I Was Just 17  " takes place the summer before my senior year, and since it's June I've got Graduation Day on my mind. I wrote this almost twenty years ago with the class of '95 in mind; it's painful to see that  the essay, published in the Daily Breeze in 1995, shows that the issues I struggled with back in high school are the same issues I struggle with to this day. What a waste of time. It's possible that if I spent less time flailing with self-doubt and spent more time honing my skills I might have not have given up, I might have something to show beyond a handful of old publishing credits. Again, I say, what a waste of time! Do yourself a favor, don't waste yours.  A Familiar Trip We were the class of '71 and believed that graduation day (now over 40 Junes ago), really was the thresho
Continue Reading »
More posts