Showing posts from June, 2018
Show all

That Boy in Bandol: My French Chapter 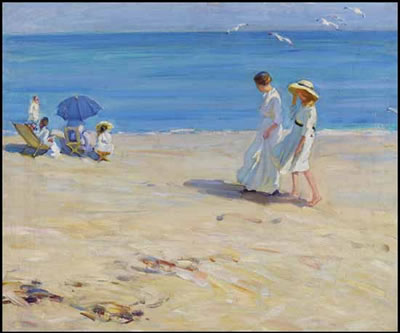 The Blue Sea by Helen Galloway McNicoll 1829-1915 The following is a collection of memoir posts I wrote documenting a trip my younger sister and I took to Paris and the South of France in the summer of 1973. The summer I was supposed to be backpacking around Europe with my boyfriend Derek, except we’d we broken up when he decided to go with a friend instead. The louse! I know it's a lot to read all at once, maybe break it up, they way I did? Look for the ••••••••  If I ever do write a book, a collection of my own stories,  these posts would make up a big chunk of the French chapter.  "Pig Alley!" My sister, sitting on the wide windowsill of our hotel room in the Pigalle, was reading from the guidebook we'd consulted to find a cheap place to stay in Paris. We'd neglected to read the fine print.  At the first hotel we tried I'd been so nervous and unaccustomed to speaking the language, that I'd forgotten to say Bonjour before I asked—in my rusty
Continue Reading »

#26: The sticky-hot days of summer ... [Memoir — listen on iTunes and SoundCloud]

#26: Gilmore Street, North Hollywood This story is #26 on the hit parade of places I've called home. I figure I've lived so many places, each house, each apartment has a story attached. I'm slowly unraveling them here on a blog I began years ago, and then let go by the wayside. I wonder, is that the story of my life?  Ben and I met when I was living with Ella on Bentley Avenue in West Los Angeles. Seven years, five apartments and a sad as-yet-untold story later, Ben's and my long and winding road ended up in a dead end. All those miles, gone to waste. That's a story for another time, here's where that road took me... The Sticky-hot Days of Summer When the dust settled from my breakup with Ben, I made my way across town and moved into the smallest bedroom in Candy and Tina's three bedroom apartment in North Hollywood. Candy and Tina were a couple of more experienced tour guides I met working at Universal Studios. Funny, isn't it? It was Ben wh
Continue Reading »
More posts