Showing posts from December, 2022
Show all

Kisses as Deep as the Ocean 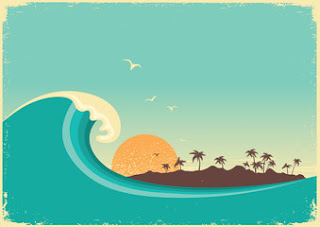 Kisses as Deep as the Ocean  Liz arrived in January along with her parents, her brother, and younger sister. They were all as white as the Canadian winter they'd left behind, flying south into the blue. The trees in Niagara Falls had been bathed in ice, everything was white, even the sky, as if blue had flown south for the winter too. When the stewardess flung open the cabin door they'd been the first down the stairway onto the airport's tarmac. The sudden shock of steamy air fogged her glasses. “It's like a hothouse,” she said. Taking off her glasses Liz let the perfume and warmth wash over her face. Beyond the airport’s chain-link fence palm trees beckoned from their turquoise background. She couldn't wait to drown herself in a sea of blue.  “It smells funny,” Nancy complained. "You're in the tropics," their father said. "It's the humidity. Wait till you see El Yunque. The air is so heavy it rains all the time." EI Yunque, he expl
Continue Reading »
More posts