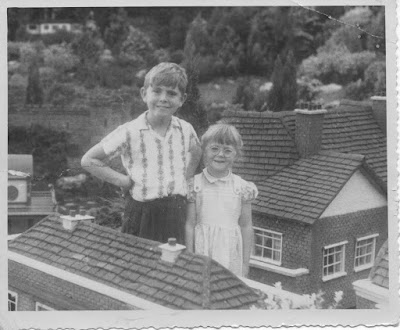 I don't know whether to caption this photo They Might Be Giants or Model Citizens.  This snap shot of my brother and me was taken at England's Bekonscot Model Village and Railway in the 1950's, but he, at least, was hardly a model citizen. Russ loved to tease me, sneaking up behind me and digging his bony fingers into my ribs crying "It's Mr. Tickle Time". The demonic grin on his face just this side of psychotic. Our little sister was not immune; she was small enough that he could grab her by the ankles and dangle her over the toilet, swinging her back and forth, back and forth, like a pendulum, threatening to dump her into the white porcelain toilet bowl. Other times, while our mother was busy in the kitchen or deep in the pages of a book, he'd wind us up in our heavy Turkish carpets and send us rolling across the living room floor.

It's scary what boredom will drive kids to do!

I was surprised to learn that Bekonscot is still there, just a 45 minute train ride from London. For those of you traveling with kids to the UK this summer, staving off the boredom factor while you tour the historical high points can prove difficult for the little ones.

The disappointment that sets in when they realize you can't actually play with the Elgin Marbles at the British Museum. Or that riding the tube doesn't quite compare to the tubular slide at the indoor playground at your local McDonald's. Walking across the street reenacting the album cover for Abbey Road just doesn't have the same zing you ascribe to it. Riding the Eye on the other hand, is pretty cool, if the adults in your party can handle the height.

Consider taking a break from Big Ben, Westminster Abbey and the Tower of London and visit Bekonscot—a fave of the Queens when she was a girl. There's just something magical about great big grown up buildings brought down to a child's level. It might even bring out the kid in you.

And try not to despair if your kids aren't getting along. One day, they'll get beyond the snipes and swipes and grow to appreciate and value each other for a lifetime of love and the kind of support only family can provide. They might even say I love you, big brother.

Speaking of which, my big brother—who I've always looked up to and not just because he's 6 foot 2—is turning 65 today. His days of playing Mr. Tickles are far behind him. I love you big bro. 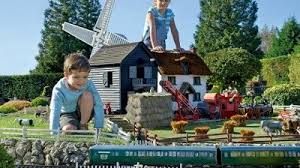