Curbed [Memoir—Now on iTunes and SoundCloud] 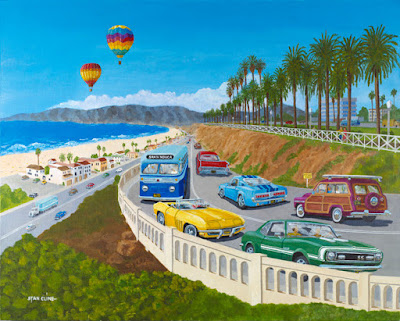 I have no idea where Derek is these days but he’s got a permanent place in my hit parade of memories from the 1970s.

Here’s another story about a boy.

I sat on the curb outside Derek’s house, legs bare, stretched out in front of me in a pair of denim cut-offs, arms freckling in an embroidered Mexican peasant blouse I’d picked up in Olvera Street. Just catching some rays in the hazy sunshine of a predictably sunny summer day in Santa Monica. Never too hot. Never too cold. Just ... right. Derek’s head safely under the hood of his GTO, futzing around with the dipstick, I took a quick swig of Coke, bringing the bottle up to my mouth, suddenly embarrassed at the phallic shape, wishing it was a can instead. Derek popped his head over the hood, mustache twitching up in a smile, holding his hand in the air expectantly like a baseball pitcher standing on the mound, waiting for a ball. I obliged, tossing him the dirty old rag from where it lay next to the can of Penzoil on the road at my feet. In a minute we’d know if he needed to top off the oil or change it all together.  If we were lucky, the dipstick would be slick with deep amber. Then we could go for a drive somewhere. Go somewhere.

We spent a lot of time in that GTO that summer. Washing and waxing the car until the metallic blue shimmered in the sun. Armour-Alling the dash. Scrubbing the white of his wheels. Hosing off the floor mats, vacuuming the interior. And driving. Driving everywhere. Cruising down Sunset, music blaring from his 8-trak, just as I’d imagined. “Baby baby, it’s a wild world.” American Pie. Joy to the World. A Horse with No Name. Heart of Gold. Singing along right out loud. “Hard to get by just upon a smile, girl.” Neither of us able to carry a tune but not caring. Laughing and loving the way he looked in his aviator sunglasses when we flew down the California Incline and hit PCH, the Pacific often as bright a blue as Derek’s car.

At night we’d prowl up and down the dark side streets north of Montana Avenue, where the homes lay far back from the street, often behind walls, hunting for a private place to park  before the police chased us off, their high beams blaring into the car. Once we’d had barely enough time to stop making out and to straighten my t-shirt before a cop was shining his light in our faces like we were common criminals. I looked down at Derek’s impeccable floor mats while the policeman lectured us on the advisability of parking in cars on dark streets at night.

We both lived at home. I shared a room with my sister in our family’s two bedroom apartment. Derek lived in a nice middle class house on the better side of Wilshire.

Our apartment was out of the question. My mother would be at work all day at the phone company but my dad, an insurance salesman, was home almost all the time. Derek’s dad worked for Douglas aircraft, his mother was an executive secretary who wore business-like skirts and dusky cardigans over pastel blouses. His house was always empty in the middle of the day, he promised. His parents both at work, his brother at school.

We’d parked in the street, gone in the side door through the yellow kitchen with the Colonial American maple cabinets. He’d led me silently down the gold shag carpeted hallway to his room, where the cocoa brown corduroy coverlet on his neatly made twin bed exactly matched the brown of the beige and brown plaid wallpaper on his bedroom wall. We’d just sat down on the end of the bed when we heard the back door open; Derek’s mother home unexpectedly from work. We’d bounced up from the bed instantly, trying to get as far away as possible from that mattress before she appeared in the doorway. We’d barely made a dent in the corduroy spread.

“Hey Mom,” Derek sounded perfectly normal as he grabbed a can of Penzoil from his closet floor.

She smiled at me over the top of her horn-rimmed glasses, her eyes an exact match for Derek’s pale blue.

“We’re just gonna check my oil. I might need an oil change.” He headed down the hall to the kitchen, his mom and me trailing after him. “Did you pick up soda?”

So now, there we were, back to our place, Derek’s car. Home sweet home.

I’ve written a few other pieces about Derek.
They’re filed under the Men tab or read the whole Derek story.


If you liked this post please forward it to a friend or share it on social media. Thanks!
love memoir podcast relationships Romance Santa Monica