Top Ten Things I bet you didn’t know about L.A. 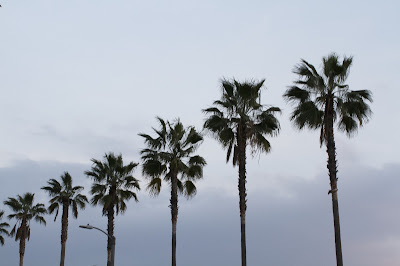 1) So how come they’re not on the postcard?
Most of us picture palm trees when we think of L.A., but the coral tree, not the palm, is the official tree of our city. Sometimes called Tiger Claws, the coral trees found along the median strip of San Vicente Blvd in Brentwood, that stretch of the boulevard from 26th Street to Brigham Avenue where once a rail track ran, and now everyone on the Westside runs, are actually designated cultural historical monuments. 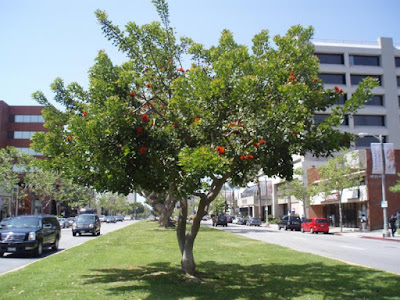 2) Hot Dog!
We baseball fans love our Dodger dogs as much as we love the boys in blue. More hot dogs are eaten at Chavez Ravine – over 2 million a baseball year—than in any other major league ballpark in the country!

3) How much by the glass?
We take for granted that when we go to the Getty, we’re going to get one of those great L.A. city views. What’s unexpected is what we see as the museum’s tram traverses the hill— a six acre vineyard growing on a steeply terraced hillside across the freeway. Smack dab in the middle of prime Bel Air real estate! Who grows grapes where lots go for over $500,000 per acre? Retired Northrop Aviation executive Tom Jones owns the vines; his Moraga wines are available at a few select shops like Wally’s Fine Wines and Spirits in Westwood where the Moraga Red starts at $125 a bottle.

4) How do you say cool in Swahili?
According to linguistic researchers, there are at least 224 identified languages spoken by residents of Los Angeles County. Within a generation, it’s predicted that more than one-third of all languages spoken on earth will be spoken in homes here making Los Angeles the most diverse population ever assembled in one place in human history.

5) Holy Wood, Batman! What a swell town.
Hollywood is part myth, part industry, and of course, part real L.A. place. One explanation for its moniker is Hollywood was named by the wife of founder Horace H. Wilcox, for the mass recited by Father Junipero Serra near the site, the “Mass of the Holy Wood of the Cross”.

7) So that’s why they call us Yankees in Tijuana!
The Drum Barracks Civil War Museum is a Los Angeles Historical Monument for good reason; the barracks served as the Union Army headquarters in the South West from 1861 - 1871 with its troops keeping California in the Union and securing what is now Arizona and New Mexico for the Union. In 1862, 2,350 men forming the California Column began a march to Santa Fe where Texas volunteers had taken control of the territory. On their way, the California Column, traveling by foot in 120 degree temperatures and in full woolen uniforms, fought the Battle of Picacho Pass, the westernmost battle of the Civil War.

8) The Russians are coming!
Los Angeles was founded by a group of 44 men, women, children, and priests —including Father Crespi —by order of King Carlos III of Spain, on September 4, 1781. Their mission: to feed the Spanish soldiers who were busy defending California from the Russian’s creeping invasion from the north.

9) Walk the Walk
Every September there is a 9 mile reenactment of the walk those first Mexican settlers made into the city. Those wearing the red sash are known as Los Pobladores 200, descendants of the original 44 people who made the trek up from the hot, dusty deserts of Arizona, Alta and Baja California through the missions at San Diego, San Juan Capistrano and San Gabriel before coming to rest on the banks of the river Nuestra Senora la Reina de Los Angeles de la Porciuncula.

The real name of our city is a mouthful. Both the LA river and the city of the angels were named Nuestra Senora la Reina de Los Angeles de la Porciuncula after a tiny chapel in Italy. The chapel was built on a very small portion of land (porziuncola in Italian) and given to St. Francis of Assisi by the Benedictine Monks. There was a fresco behind the altar of the Virgin Mary surrounded by angels, hence the little chapel was called Saint Mary of the Angels at the Little Portion. Since Father Crespi found Los Angeles on August 2nd—the saint day of St. Francis—the California town was given the name El Pueblo de Nuestra Senora la Reina de los Angeles de Porciuncula or The Town of Our Lady the Queen of Angels of the Little Portion in his honor. The city’s official name was simply El Pueblo de la Reina de Los Angeles and mercifully, shortened to Los Angeles.
essay