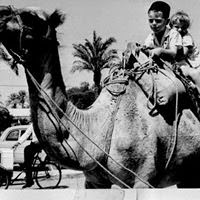 #3, Tripoli, Libya
We lived just outside Wheelus Airforce base in the '50s.
That's me on the back of the camel holding onto my big brother, Russell, for dear life.
An expanded form of this story was published in the South Bay Reader in Torrance,  California almost thirty years ago when it won an Honorable Mention in a teeny, weeny writing contest.

The Boy Who Took Out His Eye My brother Russell and me in my horrible glasses in England

I wasn't so sure. My glasses, my hated British National Health glasses with the round lenses thick as Black Cat cola bottle bottoms, the elasticized metal rims that wound too tightly around my ears, pressing into my skin, itching in the heat. The glasses that stopped my left eye from straying too far afield as though I was looking for my imaginary friend Nancy. The glasses that stopped the world from moving too fast for me to see it.
The glasses that took two weird and wobbly faces and made them into one.
"No! They're mine"
A moment of silence passed, breath noisy in our throats and then the chattering began again.
A fly traipsed across the tall one's lip, making my mouth twitch but he remained unflinching, listening, looking at me sideways while the little one yammered away. Bobbing his head rhythmically, staying silent, the taller boy leaned in closer, eyes locking into mine. Bringing his hand slowly up between us, his fingers found his face and creeping upwards, reached right into his skull and drew out his eye; a slimy, milky, throbbing ball, pupil bulging. Popping it onto the palm of his dust-covered hand, he offered it to me with what could only be called a grin. An eye for an eye. And I stood still, too scared to scream at this sight more terrible and true than any gory fright night horror movie watched on a huge and wondrous outdoor movie screen. Too scared to stop the smaller one from snatching the glasses from my face. Too scared to do anything but wail in terror, I watched as the boys ran off, their two shrinking silhouettes becoming four as they wavered and then disappeared mirage-like behind the village gates shimmering in the suns.

That evening, I went with my father, his friend Bashir, and the boy, Mohammed, on a search party behind those village walls. Hunting for the culprits we went from house to house, with me staying partly hidden so as not to see too far beyond those curtained doorways and dusky rooms where gruff voices shouted and young brown-eyed boys strained to see me in the fading half-light.
"No Daddy, that's not him. No Daddy. No" I barely whispered, squinting to stop the shadows dancing in the dark until these three men would finally give up and we could go home.
"Not to worry," my father said, tucking me in at bedtime, his ghost bobbing by his side. "We'll get you a new pair from the PX right away".
"With baby blue frames," my mother said kissing my forehead with four ruby'd lips. "Close your eyes now and sweet dreams."
But sweet dreams of baby blue frames were not in sight and I fell asleep, eyes squeezed shut tight, terrified that in the night when I forgot to concentrate, my lids would slip slowly open and my eyeball, slimy, milky, throbbing, its bulging pupil darting here and there, would slither out and fall into the blackness, leaving me screaming, blinded forever, crying in the dark.

If you want to read more — thanks so much — I've been posting a growing collection of memoir and a short story or two.

Check out On the Street Where I Live Stories for the rundown.