Have Broom Will Travel 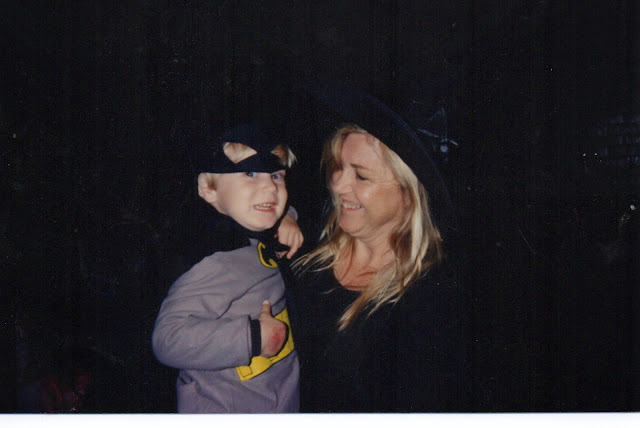 My history is littered with Halloween fails. Before I became a mother the question of what I was going to be for Halloween terrified me.

1958:  Halloween on a blazing hot afternoon in Tripoli, Libya. Age 5
All the military brats from Wheelus Air Force base were going to a Halloween party in an airplane hangar just outside Tripoli. Lots of civilian kids—mostly Brits and Yanks—whose parents worked on the base in various capacities were invited which meant my brother and I got to go too. Our dad, who spoke Arabic fluently and had been with British Intelligence during the war, had something to do with managing the PX on the base. My brother went dressed as a hobo, his cheeks smeared grey by my mother with a piece of burnt cork, while his friend, the older boy who lived next door, dressed up as a woman—a pillow stuck down his sweater shaped into clownish balloon-sized breasts and big red sticky lips. I went as Minnie Mouse in a cheap, cellophane-thin, store-bought costume. I loved it—especially how my mother customized it with the addition of a long tin foil tail—but moments after we arrived that tail got prodded and pushed and pulled by a lot of sticky little fingers; the foil ripped and the tail detached. I was five. I’m sure I cried like a three year old.

1962:  My day as a Mexican. Niagara Falls, Canada.  Age 9
I don’t know where or when my mother got the serape. I’m sure I didn’t ask to dress up as a Mexican man for Halloween. Yes, mummy, please, instead of a fairy princess or Cinderella, may I dress up as a Mexican man for Halloween? Probably I’d put off even thinking about the holiday until the last minute, traumatized as I am every Halloween, about what to be. What are you going to be for Halloween? What are you going to be? The question has paralyzed me for as long as I remember. I probably pushed the problem from my mind until the night before the school’s Halloween parade, when my inertia erupted into panic, forcing my mother to throw something together on the quick. That something was a Mexican. A surprising choice considering I was a wisp of a thing with a pale complexion and thin, ashy blonde hair to match.

After coating my face with Max Factor pancake makeup in Tan #2—an ideal shade for my mother’s eternally sun-kissed olive complexion but looking more like Sunburn #10 on my skin—she blackened my brows with her eyebrow pencil, and then drew in a thick dark mustache known the world over—I supposed—as the distinguishing mark of the average man from Mexico. On the plus side, I was able to wear my after-school play clothes to school: a pair of pants instead of the usual dress or skirt required by the dress code. My mother dug up a rope to tie around my waist and made me wear a warm pair of socks with my sandals. (Halloween in Canada at the end of October is very different from Halloween in California.) Then came the finishing touch, the straw sombrero. Did she actually have a sombrero hidden in her closet? Did she really pull that out of a hat at the very last minute or worse, was my costume thought about and planned ahead of time? I scuffled off to school in that ridiculous get-up, a walking stereotype, half bandito, half Cantinflas in Around the World in Eighty Days. And the kind of dark face completely unacceptable today, but back then what did we know. Or care. We were white. We ruled the world. We didn't even give our actions a moment's thought. My memory of the day is walking alone to school, slowly, because of the sandals, being late and made later still by the heavy serape slip-sliding off my shoulder so I had to stop every block or so to re-adjust it. By the time I got there, the bell had rung, and I joined my class not only late but hot, sticky and self-conscious. By the time it came to parade through the classrooms I’d blurred my mustache, my own sticky little fingers pawing at my upper lip when they weren’t busy pulling up that stupid serape. Did the rest of the kids in my class get my costume? Did they know what I was? No, they did not. What are you supposed to be? they giggled in their princess dresses and tiaras. What are you supposed to be?

1974:  Men in Tights in Santa Monica, California. Age 21.
I didn’t grow out of my Halloween ineptitude. There were other horrible costumes, epic failures that broadcast my cluelessness to the world. One year when I was in my early 20’s, I actually went to a party dressed as Robin Hood! Green tights and all. While other girls my age were donning sexy nurse uniforms or pouring themselves into black leotards and purring like naughty pussies, I purposely put on a shapeless green tunic! The only thing skimpy about my costume was the dinky green felt hat I wore at a rakish angle.

1987:  Cinderella at midnight in the San Fernando Valley. Age 34
In my thirties—my thirties! the same age my mother was when she draped herself provocatively for a costume party with a pale green sheet, transforming from Mom into a Greek goddess—I went to a Halloween bash as Cinderella. Before the transformation. No pretty ball gown or glass slippers for me. Instead, I wore the ever flattering ballet flats with a drab dusty blue mid-calf skirt I’d found at Good Will. Tying on a dingy piece of cloth as an apron, I paired the skirt with a dun-colored top and a plain blue scarf covering my hair, before adding the piece de resistance; a pair of grey felt mice I picked up at Michael’s arts and craft store, pinned to my skirt.

I never did change into the belle of the ball, instead, at the stroke of midnight —or close enough—I looked on from across the crowded room, while a guy I’d had my eye on for months slow-danced with some sexpot wearing nothing but a football jersey and a couple of black streaks daubed across her cheeks. I gave up trying after that, stopped going to parties altogether, leaving Halloween to those who understood what a Halloween costume was supposed to do.

When marriage and motherhood finally came my way—I was three months shy of my fortieth birthday when my Russell was born in 1993—I found myself welcoming Halloween back into my world. When he was growing up, Halloween fast became Russell’s favorite holiday, and I spent hours helping him put cool Halloween costumes together while I was content to wear a simple witch’s hat with my usual jeans and a black t-shirt to take him trick or treating. He was everything from Ace Ventura to Buzz Lightyear, Dracula to your friendly neighborhood Zombie, but at the end of the All Hallows Eve day, he often showed a fondness for the simple to achieve, store-bought Batman. Something about his inner hero.

He’s too old for trick or treating now, and certainly too old to confer with his little old mom over what to be for Halloween, but I loved all those Halloweens I spent helping him craft his costume. Can I make your wings? Of course, I can make your wings! You want brown hair like Ace Ventura? A little spray color oughtta do it. Dracula? Easy peasy.

Nothing was more fun for me than finally being allowed to forget myself and throw my energy into being the mom of a Halloween lover.

I grew to genuinely love the holiday too, my boy’s joy morphing into mine. I had a blast taking cereal boxes and with a coat of grey paint, turning them into tombstones for our front lawn. Adding ‘Here Lies Jed, He's Dead’  ‘Poor Joe—He had to go’ We made a scarecrow out of an old pair of jeans and a plaid shirt, stuffed it with newspaper and nailed him to the tree in our front yard. We even hosted a few Halloween parties where the other kids were the ones that had to worry about what to be.  Boiled up a vat of creepy-to-the touch-spaghetti guts and peeled grapes to make eyeballs to freak the kiddies out.
And was finally able to just forget about me. No longer worrying about what I was going to be. I still have that witch’s hat, and I’m not afraid to ride my broom. Halloween is coming. What are you going to be?