Baby, You Can Drive My Car ... especially if your name is Carey Mulligan

I shared a new featurette on my book to movie site, Chapter1-Take1 this morning. It's a promo video for Far From the Madding Crowd starring Carey Mulligan. If you're curious Chapter1-Take1 is where I follow what's happening in the world of screen adaptations. Don't snigger; I know it's dorky: you've got your hobbies, your sports teams, your kitty cat videos, your bacon addiction, you've got your geeky guide to whatever, I've got mine. I shared this with my readers over there this morning—there are a few more of them than there are of you—but in lieu of something with more heft, here ya go. 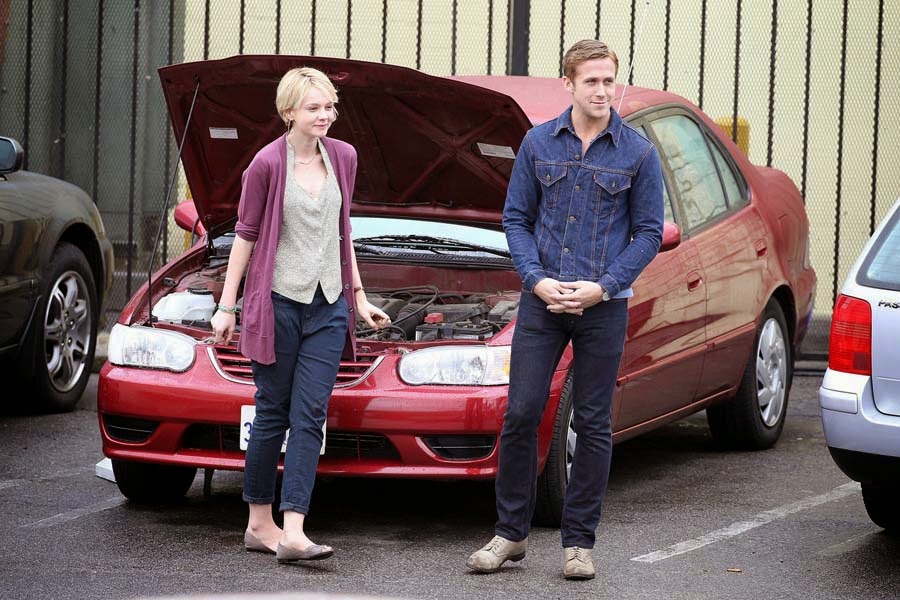 Because I live in Hollywoodland and I'm married to a guy who works in Hollywoodland, every once in a great while, the people I write about are people I've met somewhere along the line in this non-city. As it happens I met Carey once. She wouldn't remember in a zillion years, nay, a bazillion years, but we met at the wrap party for Drive, the film in which she was the object of desire for Ryan Gosling's character. It was a complete waste of her talent but she was absolute perfection in it. Their relationship is mostly shown through a series of a long, meaningful looks; hard work if you can get it. One of my favorite scenes is this one where Ryan is giving Carey and her little boy a ride home from the mechanic and he takes her on a detour to a fairly magical place. If you look for it, there is beauty in the ugliest places.

The wrap party was held at a bowling alley in the Valley; funky, nondescript, perfect. The first person I met was the little boy, Benicio, played by a kid named Kaden who was there with his mom. They both had big dark excited eyes, just feeling lucky to be there, grateful, happy. Kaden hasn't done anything since, a good thing, I think, for an eight year old kid. The director Nicholas Winding Refn was there sitting on top of the bar, long legs swinging, looking like an overgrown version of that little kid, the same blissed-out smile on his face. I read somewhere that instead of saying "Action" Nicholas Winding Refn liked to say "Let's fuck." I asked my husband, one of the AD's on the show,  if that was true. He just laughed. He doesn't do gossip. They say discretion is the better part of valor. Trust me, if you've got a secret, a questionable little something you'd like to hide away from the world, he's your man. 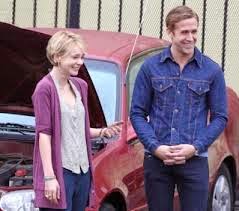 Refn used my husband's piece of crap car in the show. It played Carey Mulligan's character, Irene's piece of crap car. Hubby hasn't driven it in years but we still have it, sitting around collecting cobwebs. You can barely make it out in the picture but the paint is peeling off the top. Very classy. Carey was there that night, in a pale cardigan over a pastel colored silk blouse, looking as cool, calm and elegantly demure as you'd expect. Way too good to drive that clunker. My husband insisted on taking me over to say hello. Between you and me, I hate wrap parties. I'm a confirmed introvert and making small talk is torture, which is to say meeting famous people is mostly a meaningless exercise in controlling sweaty palms. The stars are almost always gracious and say hello and usually tell me how much they love my husband. Ryan did that; told me how funny my husband was and that he was the one that should be in front of the camera. We took a picture together, Ryan and me, his gorgeous leather-jacketed arm around my shoulder, before he slipped away for a smoke break. It's a horrible photo; I really don't know who looks worse, me—with my face pale and puffy and grinning like an idiot—or Ryan, strangely washed out by the bowling alley lights and my hubby's lousy use of his iPhone camera. Which is to say, you won't be seeing me post that here anytime soon.

Later, when the Karaoke machine was up and running, Ryan proceeded to film my husband's standard rendition of Stairway to Heaven, which he performs — sober, mind you — with pretty much everything he's got, Elvis-styled hip shakes and all.  I couldn't take my eyes off him. Ryan Gosling, not my husband. The meeting with Carey was much less momentous. Just a sweet and charming hello, it's so nice to meet you and I wondered if she, like me, was on the shy side. I just saw her on Fallon and she's hilarious but I sense a hidden quiet side. My husband asked her if she was having a good time and could we be expecting her to get in on the Karaoke? She laughed a little, made some 'Oh, I don't know about that' kind of comment back. And that was about it before a couple of the hair and makeup folks came over and whisked her away to a table. That's where the real relationships are built, in the hair and makeup trailer where the actors can sit in their chairs and relax with a cup of coffee—or tea—while the pros brush and polish them until they're camera ready. Imagine going to your favorite stylist day after day; listening to their cheerful prattle. It's easier to let your hair down and chat and be yourself in the privacy of the hair and makeup trailer, much easier to bond and make real connections.

I've always had a soft spot for Carey, both before and since, and can't wait to see what she does with the role of Bathsheba Everdene in Far from the Madding Crowd. Despite it's more nuanced morality, I think it's a much better tale for your daughters to see than Cinderella.

I've always thought Carey Mulligan had the most beautiful speaking voice, the voice which you hear singing in the trailer is hers and just as lovely.

Want to watch it? Come see me at my dorky hobby site.