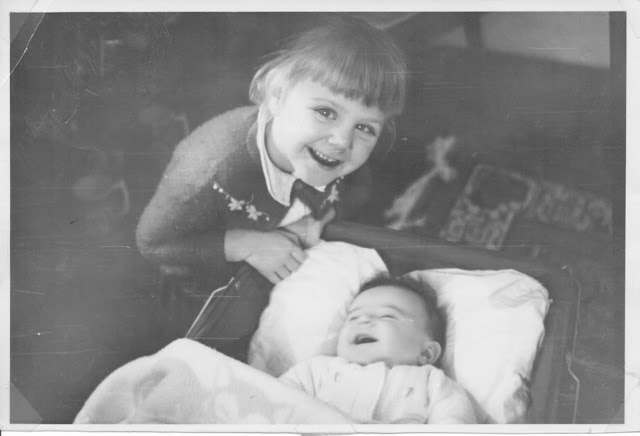 My sister, in an adjacent dressing room at Ross, is as doubled over with laughter as I am. We're trying on dresses and as we both squeeze into outfits designed with her twenty-something daughters in mind, there's plenty to snort about.

She's taught me a word I wish I didn't know. Gunt. The kind of fat that goes from your gut to your—ahem, I can't even say it. But that's Nancy, my younger sister. Brash, a little bit bawdy, she's always been the one that's more out there, unafraid to teeter on the edge of conventional good taste and expressing herself like a modern day Wife of Bath. Unafraid of being herself, while I shrink back, the good girl, wrapped up in gentility. Unless I've had a glass or two of wine, that is. Wine and my sister have always had a way of bringing out the naughty in me. 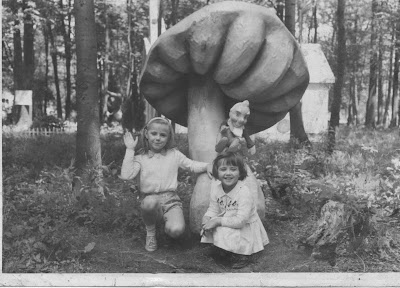 Don't get me wrong; we're not the kind of sisters who talk on the phone every day. We don't get together for these wild and crazy shopping trips every week. But we're sisters, and like it or not, we're inextricably linked, tied up in each other's lives forever.

I was practically there the night she was born in an American Air Force hospital in Izmir, Turkey in 1957; instead I was left to cower terrified in the back of the car in the middle of the night. I don't hold it against her. In fact, it was me who gave her her name.

It was my four year old arms that my sister walked her first steps into while my mother was hanging out the washing on a rooftop in Libya. Growing up we always shared a room, two twin beds with matching pink and white chenille bedspreads, a ballerina print by Degas on the curtains. No one had televisions in their bedrooms back then, instead we listened to our mother's records, learning the words to songs like Que Sera and How Much is That Doggy in the Window. Our favorites were show tunes and we both fell in love with Richard Burton singing How To Handle a Woman from Camelot—more talking than singing really—. It must have been Nancy's idea to put on a show for our neighbors, Don and his pregnant wife Sylvia. We rehearsed and rehearsed a vampy version of Let Me Entertain You which we performed in their living room while our parents looked on from Don and Sylvia's couch. Finishing our song and dance with bows and giggles, we both beamed when Don told Sylvia to 'think pink.' 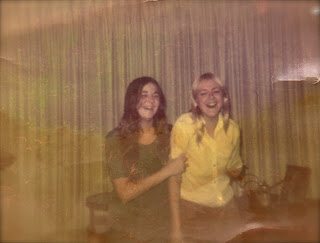 In California, my sister turned into a wild child as soon as she hit puberty. While I loved the times when we'd sit together cross-legged on one of our beds listening to Neil Young's Harvest album, going over and over the words to Heart of Gold, Nancy diligently copying down all the lyrics, filing them away in her song binder, there were other times when I'd cover my ears, trying to ignore her while she raged on school day mornings about having nothing to wear, furious that she wasn't free to wear the faded jeans she'd embroidered and patched to perfection. While I sat home on Saturday nights watching tv or reading, she raged the weekend away. She stayed out too late and started drinking too early and caused too much trouble for her own good.

She drove me crazy, the spoiled brat my parents let run wild. It wasn't fair that she had long lustrous hair, long legs and exotic good looks and who got away with murder while I was the good girl with thin wispy hair and a sweet face and had to listen to my parents worry. But she was also the one who was there for me, saving my pathetic lonely ass when my solo trip to Europe bombed.

Later it was my turn to be there for her. There in the delivery room when she had her first child at twenty three. My sister who spent her teen years alternately partying and quietly listening to Neil Young and Joni Mitchell while she worked on a macrame hanging had her baby naturally, naturally. I can see her standing naked on the mattress in the birthing room in Santa Monica—the nearest hospital a ten block ambulance ride away—arms outstretched, body flailing, as the nurse held one arm, the doctor, the other and I stood there murmuring useless words of encouragement. It's a sight seared into my head, imprinted forever.

When our father died, she threw herself sobbing on his dead body in a hospital room in the Valley. My brother was the stoic one, speaking with the doctors and nurses, taking care of business and easing my mother's pain while I stood ineffectually at the window, my throat raw with grief, unable to do anything but watch my sister wail like a wild woman.

The same wild woman who took our mother in when the Alzheimer's got so bad our mum couldn't live alone. The same wild sister who bore the brunt of our mother's fury when my sister had to drag our mother down from climbing over the garden wall trying to escape. Nancy was the one my mother punched and punished, leaving bruises on her arms and in her heart.

My sister who at fifty something took in her special needs grandson when her eldest daughter, the daughter I'd seen delivered, couldn't manage. My sister who, along with her husband, has been raising her grandson for the past several years.

She's like a character from a novel, feisty, determined, a survivor, ready-made for a David O. Russell movie. As my sister might say, how the fuck can I not write about her?!

Sorry, Nan, but I don't think you've heard the last of yourself.