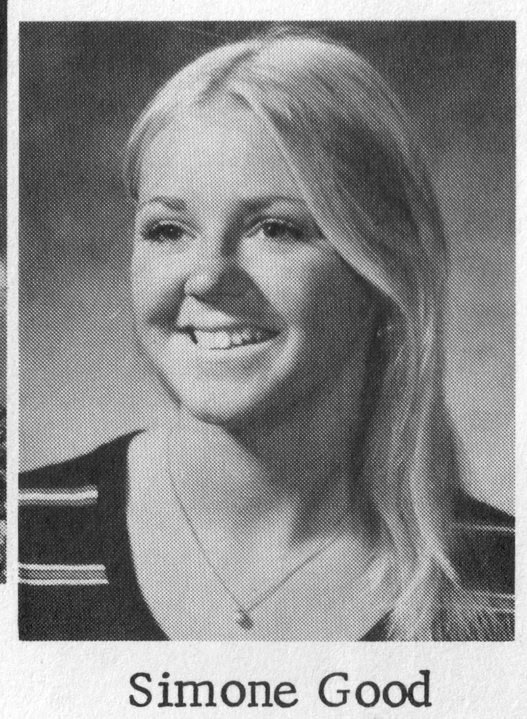 G is for Good. But not necessarily the greater good.

I used to hate my name. No one seemed to be able to pronounce my first name properly and my last name just sat there, wooden and clunky. Look at it up there, the way it looked in my high school year book, class of 1971. Ridiculous. Just waiting for someone to tell the dirty joke. The two names together, Simone, after the French film star Simone Simone, and Good, like it was torn out of the Dick and Jane primer. As if my parents tacked on a piece of poetry to a grocery list.


Coming up with a satisfying signature, an obsession of the young, was impossible. Just as the pen in my hand would get into a nice loopy groove —the curves of the capital S, the rounded mounds of the m and and n, the long tail of the letter e —and suddenly everything stopped short. The big G, fat and stumpy, as ugly as its guh guh guh sound, followed by a couple of o's that went nowhere and then, that hard final d.


Good. It didn't work as a descriptor like people whose names are Carpenter or Baker; was I supposed to be good? But why, when surely the phrase 'good, better, best' beat it into my head that 'good' wasn't good enough. I had to be better. I had to be best. Yet I was just 'Good.'

With puberty came the sexual innuendo.

"So," the boys would leer. "Are you?"
"Am I what?" Before I knew better.
"Are you good?"
Followed by the snicker.
I spent years trying out a variety of responses to that one, but really I wished I didn't have to.

You'd think I would have gotten married sooner, if only to dump that name, but it took me almost forty years to find a new one.

I ditched my second syllable, decided I would be Sim; carefree, like the kind of woman I wanted to be, those spunky no-nonsense femmes they called Slim back in films of the 1940's, a Katharine Hepburn wry and quick-witted, slow-burn type, a woman who could paddle her own canoe, mix up a mean martini and beat the pants off you at tennis, all while looking wonderful in her own, thank you very much.

My borrowed last name of the last twenty plus years is more satisfying too. Carter. That thing you shouldn't put before the horser.

I can answer the question without looking for the leer in your eyes.
Am I good? Yes, I'm fine, thanks.