The Height of Hubris : Climbing Notre Dame in 1989 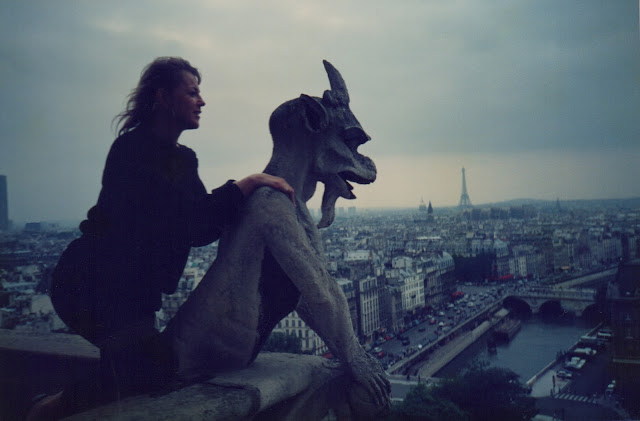 A Paris flashback for Dreaming of France.


Voila! C'est moi with one of the iconic stone chimera of Notre Dame overlooking the entire city, the Eiffel Tower perfectly placed in the background as though by a giant set designer in the sky. I used to think the horned goat was a gargoyle but he's not. Gargoyles are the creatures fashioned into waterspouts, monstrous looking but serving the prosaic function of keeping water off the roof and the exterior walls of Notre Dame, minimizing damage from rainstorms. My bearded goat-friend is a chimera, a grotesque, one of hundreds added when the cathedral was restored in the 19th century by the architect Eugéne Viollet-le-Duc. Much of Notre Dame had been destroyed in the French Revolution, the French Revolution Mindy and I and a zillion other tourists and Frenchmen were celebrating that July in 1989. 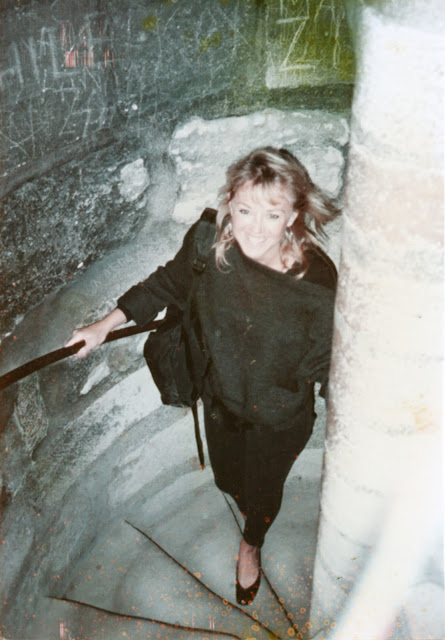 I was excited to climb to the top of Notre Dame but once I got to there and my friend Mindy wanted to snap a ph0to of me and my friend the Chimera? Not so much although I put on a brave face.

Is that the terror on my face, fearful of the demonic aspect of the horned and bearded goat or was it merely my perilous position high above Paris that gave me pause?

You can't do that anymore, pose with this chimera. Kneeling on the wall is not only forbidden, it's impossible. The chimera on the edges of the buttresses, like the Sabbatic Goat-like creature here, are fenced off from the public. 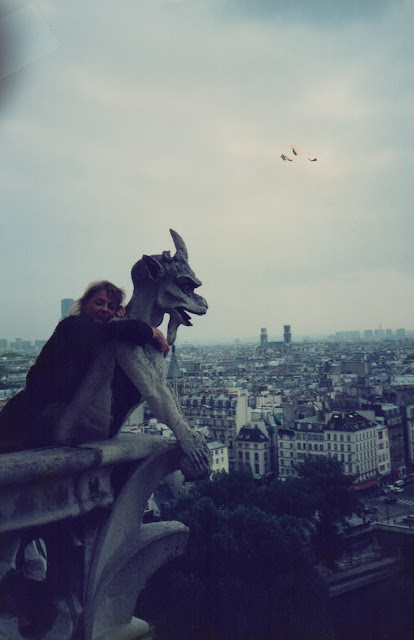 And here I am again, my arms wrapped around his neck as if in some post-coital rapture. Truth? I was probably relieved the picture taking was over and I could slide down off his back and slip away, back down the stone spiral staircase and onto the relative safety of the streets of Paris.

Twenty five years later and I'm a mother now. Wounds inflicted by stray firecrackers and being snubbed by sleazy men bother me not a bit anymore. What terrifies me these days is the thought of my son, grown man though he is, filled with the hubris of the young, doing something just as fool-hardy as I did that gloomy summer day.  Driving when he should be walking. Walking when he should stay put. I found out after the fact that when he was at NYU he loved to roam the city streets in the middle of the night. I'm glad I didn't have a clue. Those are the things that frighten me now. That's what really terrifies me.