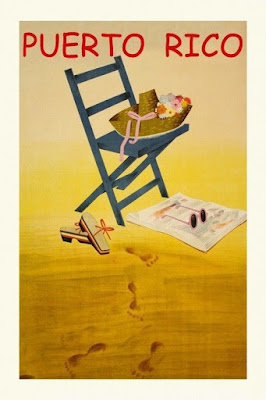 My daily three-mile walk in the morning keeps me in passable shape, clears my head, and gets me going. I start each day, after coffee but before breakfast and writing by heading out to the park where I walk in circles. As a writer, I'm seeking inspiration for my novel, working out plotholes. As a human being, I sometimes need to blow off steam. The Jacarandas shading the pea gravel pathway are a beautiful distraction, stunning in springtime when they bloom in deep blue purples, and mandatory in the summer when Los Angeles heats up early. Today as I near the patio sitting on the perimeter of the park, I see the gardeners have hosed down the cement. The entire surface is still wet and puddled. Slick. Without my permission, my heart starts pounding, bringing me crashing to a halt. Wimp, I think. That's in the past. Shake it off.

I can't. I’m afraid. I'm fifteen years old again, walking along a sandy road near the beach in San Juan with my best friend. We're both wearing skimpy summer dresses in a vain attempt to escape Puerto Rico's sultry tropical heat while hoping to catch the eyes of some local surfer boys. We're heading to Linda's condo in Isla Verde when we hear someone behind us singing "There is someone walking behind you. Turn around, look at me." It's a pretty drippy song by today's standards but that summer of '67, the hit by The Vogues was all you heard blasting out of transistor radios all over the beach.

Turning around, there was Rogelio, his name sounding like a song—Ro-Hel-EE-Oh—looking as though he stepped right out of the pages of Surfer magazine. Bare bronze chest, well-worn baggies, sun-kissed straggly hair. A couple of tell-tale scars on his legs, surfer knobs on his knees. One of the local surfers we crushed on from afar, and he was singing to us! He was thinking about going to Aviones to catch a few waves. The morning rain had stopped, the waves should be primo. Did we want to go?

He was meeting Gary at the surf shop, they'd give us a ride to Linda's place to pick up our swimsuits.
I knew Gary was home for the summer from college on the mainland. He had to be nineteen, twenty even. Rogelio had to be older too. Twenty maybe? Twenty-two? Linda and I sat in the back of his dented-up Ford Maverick exchanging looks. How cool was this? Wait till we told Candy!

We jumped out as soon as we pulled up to Linda's building. They didn't need to tell us to hurry. We couldn't wait to slip our suits on and get back in the car.

Grinning at the thought of these two gorgeous guys, practically men, sitting in the car,, waiting for us, Linda and I went racing across the outdoor lobby to the elevator bank, the marble floor still slick from the rain. One moment I was laughing, looking back at Rogelio leaning out of the window smiling, teeth white against his brown skin, the exact shade of tan I yearned to be, the next I was vaguely aware that my foot was slipping, sliding away. Still conscious as my head banged with a thud on the hard stone surface until the next thing I knew I was riding up the elevator in Rogelio's arms. It happened so fast I barely registered the pain. One look in Rogelio's brown eyes must have been enough to make me faint again; the next thing I knew I was waking up in my own bedroom back in my family's apartment on Avenida Ponce de Leon, the brightness of the sun coming through our seventeenth-floor window bleaching everything white.

My mother stroked my head, and because she's British, made me tea. My little sister played nurse, put cold flannels on my forehead. My brother was nice to me. I couldn't understand how I could be home in my own bed. Where had the missing chunks of time gone? It was a twenty-minute drive from our San Juan neighborhood to Isla Verde out by the airport. Where had I been when the phone calls were made? Did Linda cry? Did Rogelio and Gary bring me home? I was deeply disappointed I couldn't have been both the star of the drama and witness to the accident and its aftermath. My parents kept me home from school for a couple of days to recuperate and somehow Jorge Machuca heard the news because one afternoon I woke to find a tiny wooden crate had appeared on my bedside table. Inside was a small batata, a candy made of sweet potato, one of the island's dulce tipicos. "A boy named Machuca," my father said, "hoping you're okay," and because he's British, not much more.
I never heard from Rogelio and Gary again. I was sure after that stupid fall they thought I was a baby, una idiota. Gary went back to college, Rogelio disappeared, my drama a drop in the Caribbean sea. I kept that little box Machuca gave me for a long time, taking it with me when we moved to California a few months later, painting it green and red, decorating it with hearts and Machuca's name. That sweet gesture from the famous Machuca took some of the sting out of my fall from grace. Unfortunately, it didn't strike out the fear.
#
I don't just have a fear of falling, I have a history of falling.
These days I can't walk anywhere without my husband reminding me to watch the curb, to keep my eyes front, to slow down. Who can blame him?
I'm not complaining, just explaining why a patch of wet pavement has the power to stop me in my tracks.
I try not to be a baby now. I pick my way across the surface, gingerly seeking out the dry spots, my eyes so focused on my feet I don't notice how close I am to a bougainvillea until a thorn scratches my arm, drawing a neat thin line of blood across my skin. There's some kind of lesson there, something about how playing it safe doesn't necessarily mean you can escape the pain.
Making my way to the safety of the gravel path, I walk eyes forward, focusing on keeping my stride sure and confident. There's music playing in my earpieces, it could be Adele, it could be Cold Play but all I can hear is "There is someone walking behind you. Turn around, look at me." I just keep walking.