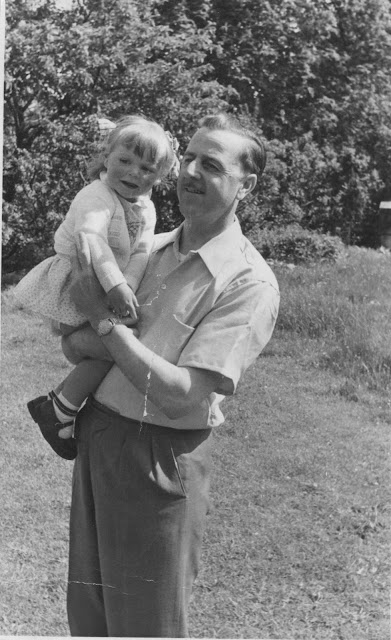 That's me & my old man. My dad, daddy, dada. My father knows best. He would have been about forty when this picture was taken. I'm probably two, maybe two and a 'foff'. I had a little lisp so that's how I would have said it, not two and a half but two and a foff. So my mum used to tell me. We are standing, if I've got my familial history straight, in the back garden of my grandmother's house on Mansfield Drive in Hayes, Middlesex, about twenty miles outside London proper.

I wish I had just one photo of my father holding my own son in his arms like this, the way my sister does of our dad and her daughters. She has plenty of snaps of him playing grandpa: our dad standing in my parents' kitchen, holding one of the twins with both arms under her pink diapered bottom, one fat little baby arm thrown around his neck, her head on his shoulder, her other hand clutching at his sleeve. The look on his face; the pleasure he takes that he's been able to calm her. Photos of him and my mother pushing all of my sister's kids, at various ages, in strollers at Disneyland, at the mall, at Venice Beach. At the zoo, in a robin's egg blue shirt and old man's peaked cap, he's holding the girls by the hand, one twin toddler on each side, both dressed in pale blue jumpers, accidentally matching their grandpa's shirt color, while their big sister peeked out from behind his back.

I'd love to have a photo like that but my Russell, named after my father-in-law as well as my brother, came too late in my father's life. My dad died a couple of months after my now-husband and I started dating. Far too early to know I'd finally—at thirty eight—met my future husband, and that in a little over a year, I'd have given him a grandson, his first grandson. His only grandson.

He would have loved you so much, I've said to my son many times over the years.

I like to believe they would have been close even though I don't have any evidence, any actual events, or facts to back it up. It's wishful, even magical thinking, just a feeling, on my part.

I imagine my son as a small boy, rapt as my dad shared stories of his life. Russell—his middle name is Edward, after my father—is a writer who wants to make movies, as a history buff he would have loved listening to the tales my dad would tell of serving in World War II. As a former British Intelligence officer who could speak five languages, he was an old-fashioned raconteur. Like my son, a storyteller. It's not altogether unthinkable that his life would have inspired a movie idea.  Not that he was sharing any trade secrets, mind you, just snippets, like the time he visited a Turkish bath during an investigation and had to shave his legs for authenticity. Or how he once smoked hashish during an undercover operation. When we were teenagers in the late 60's, discussing our theoretical use of marijuana, he swore to us straight-faced that he'd tried hashish once and it didn't affect him at all. He would have told my son all about the Italian prisoner of war camp where he coached a football team. He'd have got the old albums out, the black and white photos brittle, and pointed out the places he'd been, the friends he'd known.

If they'd been close—the way I can imagine, unimpeded by reality, they most certainly would have been—my dad might have confided the real reason he left home at seventeen, leaving Preston, Lancashire for Alexandria, Egypt. Did his mother really throw a knife at him?

"Shufti" he'd say. Shufti means 'take a look' in Arabic, one of the five languages he was fluent in. "Shufti" and he'd roll up his pant leg so my son could get a look at the scar, a silver dollar-sized indentation on his very white leg, where he got run over by something when he was a boy. A lorry? Some sort of cart? My son with the steel trap mind would have remembered.

They might have sat together and watched the boxing on TV the way I did with my dad when I was a teenager, the horror and the thrill of seeing the punch to the gut, the arms so heavy with ache they could barely hang on, the cut eye closing, the lid ballooning, the drama of the fighters' corner and the trainer's patter. My dad and I had Muhammad Ali, Joe Frazier, Roberto Duran. Would my son and his grandfather have bonded over Oscar de la Hoya, Manny Pacquiao and Floyd Merriweather?

Would my father have snorted at the hilarious antique formality of Russell going to Cotillion when he was in middle school, learning how to waltz, to foxtrot, and to politely ask a girl if she'd like a cup of punch?

"Bloody fool" he'd say to me, "wasting your money on dance lessons! I'll show him how to bloody dance." He could have too. My mother used to tell me when they went to parties, all the other women wanted to dance with her Eddie. I reckon he'd have added a few pointers on how to dance a girl off her feet by doing the asking in French or Italian while he was at it.

Now that my son has reached my father's height, it's easy to picture them standing next to each other, straight and tall, my father's posture perhaps owing to his military training while my son's just comes naturally. The two of them are in my father's bedroom, surveying the selection of shirts and ties my dad has arranged on the bed. "This one, or this one?" my dad would ask my son, the way he used to ask me, and Russell—who wore jackets and collared shirts in high school while other boys were wearing basketball shorts and baggy tees—would be more than happy to ponder the possibilities, the pluses and minuses of the plain grey shirt vs the blue stripe, the paisley patterned tie vs the solid navy.

But those are just wishful thinking, sweet scenarios I conjure up instead of the hostile standoffs that sometimes come between young men who think they know everything and older men whose hold onto their personal power feels like it's fading faster every year. Perhaps their conversations would be more combative, more along the lines of, let's call it 'helpful' criticisms.

"You need a haircut." "When are you going to wash your damn car?" "You can't drop out of college! All that hard work and you're going to toss it in the trash? You're a bigger idiot than I thought you were." "When I was your age ..."

When my father passed away, my mother gave me his desk, cherrywood inlaid with a leather top, that my parents picked up at a used furniture dealer years ago. It's where my dad sat, his quasi-office in a corner of our living room, paying bills, doing the pools, and making call after call when he was selling life insurance. I never understood why it was so hard for him to set appointments; I didn't see how anyone could resist his gently gravelled voice with the English accent, a voice, I thought, fit for a British army officer, a John LeCarre kind of spy.

The desk sits in Russell's room now and in stark contrast to my father's tidiness, where everything was tucked into drawers, out of sight and neatly aligned, the surface is now covered with my son's personal clutter. Crumpled receipts, a basket of socks, his macbook, a stack of notebooks, his camera, pens. Chapstick and chewing gum. More crumpled receipts. The desk belongs unofficially to Russell now, who long ago checked every inch of it for false panels, any place a 'spy' might hide some once important code. A clue of some kind. He came up empty handed but when I squint I can see past the litter, beyond where he sits scribbling away, his back as straight as if he'd had a lifetime of lectures from my father. And I know the code is there, my father, some part of him embedded in my son's DNA.


If you're following my virtual walk in London, we last left off at Day 33 at Leicester Square. I've been planning to visit my grandmother's Mansfield Drive home later in our journey. For today's sidetrip I took the Metropolitan line to Uxbridge and walked the ten minutes down to Hayes. Travel time approximately one hour plus. I'll be back next week rejoining the current walking trip, heading out from Leicester Square.
family memoir photography