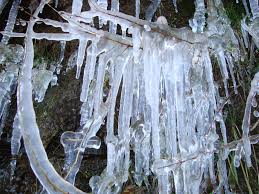 Growing up in Niagara Falls, there were Decembers so cold, winter not only iced the ground with two feet of white frosting, the falls actually froze. Along with the usual snowy wonderland of pearlescent trees dripping icicles, a frigid front emanating from the northernmost corners of the Great White North delivered some painful cases of popsicle toes. Hobbling in from the cold, I’d stand next to the radiator, tiny knives stabbing at my toes, tears pricking at my eyes while my mother unbuckled my snow boots to rub my feet back to life.

It’s been decades since we moved from Canada to California—via a year in tropical Puerto Rico—and while I don’t miss the frozen feet, December days can still find me longing to transform winter in mild-mannered Los Angeles into the frosty fantasy of my youth. Decembers when the memory of the arctic chill seeping into my bones has been forgotten in favor of half-remembered mugs of hot apple cider making my glasses fog up, a pile of Christmas presents towering in my imagination over that of my brother and sister. Christmases when the chocolate treats in my Christmas stocking outnumbered the walnuts, when snow crunched beneath brand new fur-lined leather boots, and when the idea of Santa making my childlike dreams come true was still within the realm of my reality.

It was during one such December that I got lost in a White Christmas haze and in a moment of Martha Stewart madness offered to host the Christmas dinner at our little house on the hill. The whole family would be there; my now-deceased mother, my brother and my sister-in-law (only the world’s greatest cook) my sister, her husband and their three kids, at whose larger home we usually celebrated. And who I had a hunch had mixed feelings about being let off the hook. “You sure you have enough room?” she’d asked. Add my husband and son and we made a dozen for dinner. Not a number that need be daunting but I regretted the invitation immediately. What was I thinking? Me make the turkey and all the trimmings? Me whose idea of cooking was to boil up a batch of spaghetti topped with a microwaved jar of Ragu? I was desperate that everything be Norman Rockwell perfect, doubtful that it would be.

I dreaded cooking a turkey dinner with all the trimmings in what was turning out to be one of the warmer Decembers, even by LA standards (yes, Virginia, global warming has been coming for a long time) but Christmas was Christmas; turkey, stuffing, mashed potatoes, carmelized carrots, Brussell sprouts, two kinds of gravy, steaming hot dinner rolls, corn casserole, mince pies and plum pudding were all part of the equation. The main attraction being the turkey, I took my mother along to buy the bird. As we stood staring at the mass of frozen turkeys, she mused on the merits of the grocery store brand ‘Tom’ turkey vs the family favorite, a Butterball hen.

“There’s a reason they give them away, you know,” she nodded knowingly, referring to the store’s ‘free turkey with minimum purchase’ promotion.

“Hmmm,” I said, reaching past the twelve pounders to get my hands on a twenty three point five pound whopper. “It’s free. I’ll just grab one anyway.”

There’s no such thing as a free lunch. Or, apparently, a free turkey. As I struggled to maneuver the bird—frozen solid and rock-heavy—into my shopping cart, the slippery sucker slid right though my fingers. Through my fingers and onto my big toe. All twenty three point five pounds. Other shoppers stopped and stared as I hopped wildly from one end of the meat department to the other, yelping and squealing out the most un-holiday like greetings, while one of the butchers retrieved the inferior Not-a-Butterball freebie and placed it in the bottom of my cart.

When the pain mellowed into a bearable throbbing, I grit my teeth and gripped the cart like it was a walker and carried on with my shopping. Stiff upper lip and all that jazz. It’s in my British DNA. Still, by the time we got home I was trembling as I phoned the doctor, my mother unlacing my black suede boot like I was a child again.

“Looks like it’s broken,” the doctor pronounced, peering at my toe expanding before our eyes like a red balloon. “Thing is, there’s nothing we  can do if it is. Except give you some crutches.” He smiled. “Hope you’ve finished your Christmas shopping. You’re going to have to keep off that foot for awhile.”

“Hoppy Holidays,” the receptionist giggled merrily as I hobbled out the door.

In the end, my husband cooked the Christmas dinner—doing a better job than I ever could—and with a little help from the rest of the family, our Christmas meal was as delicious as ever. My sister even said the place looked beautiful and that the house wasn’t too small after all.

Me? I sat in a corner of the couch, sipping champagne, crutches close at hand. Of course, everyone made fun of my clumsiness and called me Tiny Tim but what kind of family would they be if they hadn’t? As I looked around, at my siblings who tittered but brought me refills, at my husband who cooked and sweated but survived, at my little boy whose eyes glistened without the help of snow, and at my my mother lighting the brandy on the plum pudding, I raised my glass and couldn’t help but reply in the drippiest Dickensian voice ever, “God bless us, everyone.”