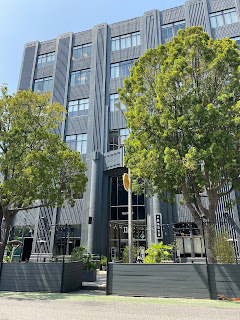 This story begins in the bedroom I shared with my sister in the apartment we lived in with our parents on Twelfth Street in Santa Monica. It's  #13 of my  "On the Street where I Live Stories."  Yep, I've got many miles to go.

She turned back to Anna, “So how’s my girl doing, Anna? Is she being a good helper?”
“Oh yes. She’s good worker. I almost wish Claudia no coming back tomorrow.”
“Claudia?” my mom asked.
“You know Claudia! The little one? She no work today so Rosemary say she going to call you.”
I was too embarrassed to ask if that meant that I didn't really have a job and I wasn’t coming back tomorrow, that’s what it sounded like.
My mother asked. “And Claudia will be back tomorrow?”
“Tomorrow, yes.”
“Oh, I see. I thought Rosemary said—well, never mind. I’m sorry Simmy, it can’t be helped.”
“It’s okay, Mum.”  But I felt weirdly disappointed.
I rang up my mother’s coffee—10¢—and took her money and suddenly there was a crowd of employees all streaming in for their break and wanting coffee at the exact same time. Rosemary had me man the register, raking in the dimes. Sometimes someone would want a piece of pie with their coffee but no one at all bought the sandwiches.
“Later” Anna said. “At lunchtime. You’ll see”
“What time is that?”
“11:30 to 1:30”
“But isn’t that when I’m supposed to leave? At11:30?”
“Leave? Oh, no you not leaving. I need you for lunch time! You no want to stay?”
“Oh no! I do! I just thought—”
“—I tell Rosemary I need help all day.”
So I’d stay. But I didn’t even make it to lunch.

I was zooming along, slicing up some ham and cheese on rye, when I saw something dark and splotchy discoloring the bread. I looked around to see if I’d used ketchup by mistake and almost fainted when I saw that it was my own blood, pouring off my hand and staining the bread a rich, ruby red. I’d cut my finger and while I rushed to the sink, trying to stop the bleeding, the blood kept coming. By now the red was streaming down my arm, onto the white apron and onto the floor. One little finger but that blood was everywhere. I swaddled my hand in about a roll’s worth of paper towels and went in search of Rosemary or Anna.
“Um, do you have a bandaid?” I asked, feeling like a fool and trying not to cry.
“Oh shit!” Rosemary said.
Anna helped me with my bloody finger while Rosemary called my mother, who called my father.
When I was a kid back in Niagara Falls, I’d broken my arm falling into the tomato patch in our backyard. I remembered my mum had called my dad to come home and take me to the hospital then too. Knowing he was coming to get me was the only thing that stopped my tears. I was grateful he was coming to get me now.
“Lucky I happened to be home,” my father said when he picked me up. “My afternoon appointment cancelled.”
We left my mum at work with the promise to call and let her know I was okay, that there was absolutely no danger of gangrene, and no danger whatsoever that anything would have to be amputated.
I never thought a second about what my mother did all day. Whether she was nice, as Anna said, or not. Or what it was like for her after being home raising us kids for most of her married life, to have to go back to work in her forties when we moved to California. Had she thought that her workdays were behind her when she met and married my dashing dad all those years ago? After spending her life raising us kids, taking care of the house, enjoying her days reading and gardening and baking, in midlife she had to change with the times. Like women all over the country she got herself out there and got a full time forty hour a week job. Spending her days plugged in at General Telephone, a card carrying member of the Communication Workers of America, she dispatched repairmen to all the broken down phone lines in town, and then my mother came home to dinner, laundry, and cleaning and somehow managed, like Anna said, to always be smiling.
I was not my mother. She’d worked in an airplane parts factory during the war. When she was even younger than me, she’d worked on the London buses, running home at night alone with the threat of real bombs exploding around her any moment.
And here I was, unable to make a few lousy sandwiches without making a mess.
I was not my mother. I wished I could be a real-life heroine, I wished I’d be called on to do my part for my family, my country. I’d love to find the courage to face my fears while facing the world with a smile the way she did.
I could try. And one day I could write about it. That’s about all I could do.

postscript: my mother died in April of 2012.
She was almost eighty-seven years old.