Little House on the Hill

Living in the little house on the hill for six straight years was a gift. That's not quite hyperbole. We got the Mountain View house - #33 in the list of places I've called home -  when our good friends, Mike and Judy, found their dream home and moved out of the Mar Vista bungalow they'd been renting. They recommended us to the landlords as the perfect tenants; that perfection being a bit of a stretch considering the house was going to cost us a challenging $300 more every month than what we were paying for our townhouse. We signed the lease with the owners, dropping us within the boundary lines for our school of choice just days before the deadline to register for a coveted kindergarden spot in the fall.

It had happened organically, inevitably; exactly as I'd laid it out on my treasure map. A couple of years before then, back when Mike and Judy were only dreaming of homes, I was dreaming too.  Using a photograph Judy had taken one afternoon of Mark, Russell and me standing in front of their house, I made a vision board. I stuck the photo to a piece of poster board and wrote "Our house" in big, bubbly letters arching around the top. Along the bottom "is a very, very, very fine house" completed the circular lyric. I added some other pictures I pulled from magazines, 'visual representations' of goals and dreams, the way you do with a vision board and I'd tacked it to the wall just inside the door on my side of the bedroom closet. A place I could see it every day without everyone knowing it. Which probably isn't the recommended way to think about a vision board if you stop and think about it.

No matter, it worked, or something did. We got the house. And Russell spent his entire elementary school life in that house, going from kindergarden through fifth grade in the same place, going to the same school, with the same friends, before we moved away, pulling him from his world at the start of middle school. Those Mar Vista years on the hill were good ones, with storybook neighbors - the T. family, friends and playmates - on one side; Bob and Helen - a cliche of the kindly elderly couple - on the other.  More than ten years later, I still miss them but it's Bob and Helen that I can't help think of every year, right around now. I've shared their story before but it takes place during the Easter period so I figure there's no time like the present to re-share in lieu of something new. I am toiling away; maybe next week?

If this is your first time here, this is one of a series of mostly memoir pieces that I call On The Street Where I Live Stories

The Easter Lilies: A Love Story 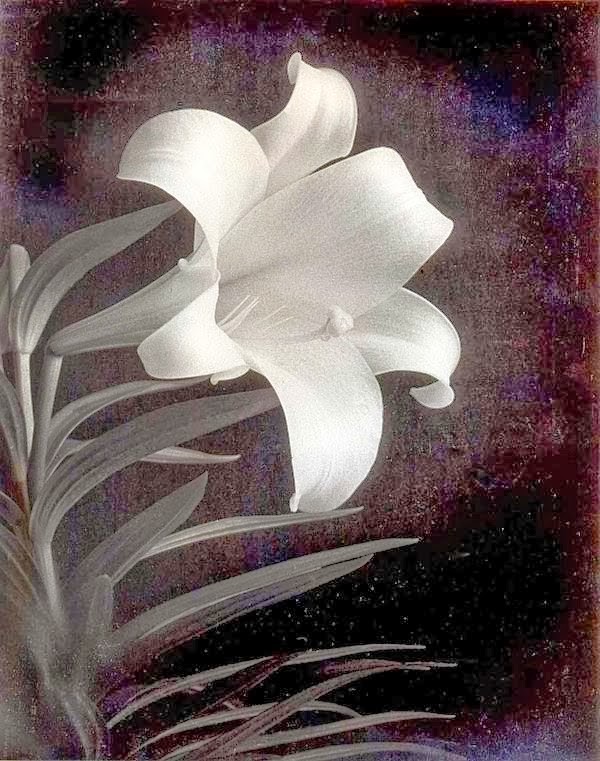 The coleus under Bob and Helen’s front porch window are looking a little scraggly, nothing but tall leggy stems bending in their bed of dry cracked earth. I think how the gardener wouldn’t let them go like that if Bob hadn’t been so sick. If he’d been up and around, those plants would be standing tall, their leaves firm and perky, the ground blanketed with a soft, moist layer of mulch. Well tended, that was the best way to describe Bob’s garden, and come to think of it, Bob too.

I try to remember if I even saw the gardener this past Wednesday, his usual day to come mow and blow. After all, who will notice if Bob’s plants die now? Not Bob while he’s sick in bed. Not Helen who uses a walker and rarely ventures outside. Bob told me once Helen wouldn’t allow him to get her a wheel chair, she couldn’t stand the idea of looking like an invalid. That sounds like Helen, the kind of woman that old-fashioned words like proud and stubborn apply to.
Peeking through their front window I’m shocked to see a hospital bed just the other side of the glass. Its metal rails gleaming in the shadowy front room, a remote on top of the neatly tucked-in white sheet, the bed has taken the place of the highly polished dining table with its Hummel figurine centered on the white lace doily.

Of course Bob isn’t in the bed otherwise the drapes would have been drawn or the sheers pulled to shield the scene. Helen would never allow Bob to be on display like some figure in an exhibition, like in one of those dioramas at the Museum of Natural History with their neat little framed white cards posted nearby: Prostate Cancer Patient At Home. Circa 2000. I have to circle round the bed and walk through the kitchen to get to the small den in the back of the house where Helen sits in her avocado green vinyl chair, head resting on her hand. I squeeze her gnarled fingers in greeting, gently but firmly. I’m almost half her age but I have the same arthritic knots on my knuckles; Heberon’s nodes they’re called, as if they’re some exotic islands Ulysses might have discovered instead of the ugly, swollen joints they really are. It’s not as bad as it looks except when my little boy needs help tying his shoes.