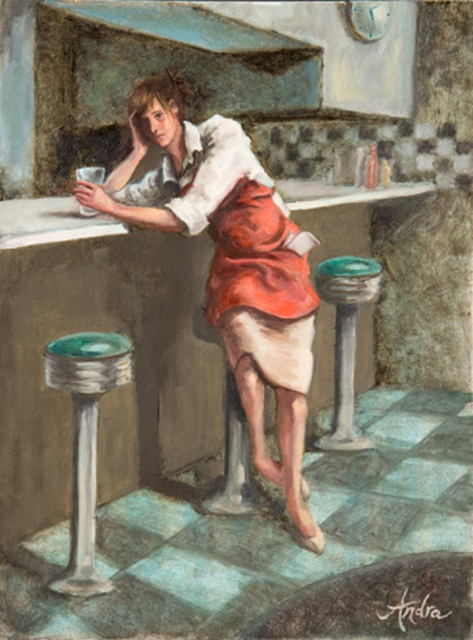 I'm writing bits of memoir and putting some of them together under the label On the Street Where I Lived stories. Hoping to get them published in a book someday. This one dates back to the early seventies, I was nineteen, still living with my parents on 14th Street in Santa Monica. (orig posted 12/12/14)


The last thing I wanted was a part time job that had anything to do with food. Or uniforms. Not after my stint in the employee cafeteria at my mom's work. Still, somehow I ended up hemming a turquoise uniform to work at the snack bar at the grocery store right across the street from our apartment. The snack bar at the grocery store—if it had any other name, I never knew it—served up mostly cheeseburgers, milk shakes made with scoops of real ice cream, and deep-fried chicken. Plus a whole lotta coffee, especially to the employees.

I’d see the stock clerks coming, and after working there a couple of weeks, I learned to grab the pot ahead of time, bracing for the gang of them shoving their dimes across the counter, jostling for service like overgrown frat boys. While they shouldered each other about, Roger, the old man of the group at thirty something, would take his place at the far end of the snack bar. His back against the wall, as cool and assured as the lawyer he was prepping to be, he slid his coin toward the register, a wink in place of words.

Niles, calling out “Coffee, shweet-heart!” long before he reached the lunch counter “And make it snappy!” in his best Humphrey Bogart, was the noisiest of the bunch. You could always tell when Niles was working a register, his line the lengthiest; everyone willing to wait just a little bit longer while Niles juggled your oranges or flipped your box of cereal high in the air before punching in the prices in those pre-scanner days. Calling out ‘hey there, how ya’ doin’?  to every female who passed, both the pretty women and the tired old ladies and the giggling little girls too, Niles made the ordinary chore of grocery shopping just a little bit lighter. In his wake, came his awed followers, the younger guys wishing they had what Niles had, whatever that was. Not impossibly great looks or deep dimples. Not football hero muscles. Nothing but high-octane charisma. Armando, big and bashful, wincing at Nile's brashness, quietly asking for ‘a cup of coffee, please? Black?’ I always poured his and Roger’s first, Niles didn’t notice, he was so busy twisting and shouting hey, how ya doin’s? as longtime favorite customers passed by.

“Are those the same hot dogs I saw here last week?” one of the guys might joke, or “Ya have any that aren’t green?” and if between the two of us we could find a frank that still looked smooth and plump, he might even say “Yeah, okay, let’s risk a chili-cheese dog.” The occasional customer would order a dog smothered in sauerkraut but mostly the franks were left to wither and wrinkle, spinning all day on the rack in the glass case, only to be thrown away at the end of the night.

Oh, the amount of food we threw away. The mayonnaise grown crusty and yellow at the edges in its square metal tub. What was left from the pound of cheddar I’d grated early in my shift. The onions I’d sliced and diced as my eyes burned and teared, the stink of onions staining my fingers no matter how many times I washed my hands, until Lena taught me how to stop the tears by chewing on a piece of bread and to get rid of the smell with lemon juice. We threw everything away, everything but the fried chicken. Lena insisted we took the chicken home.

Lena was the boss. Short and squat, she peppered her vocabulary with ya's like an Old Country cliche. She kept her hair, still vaguely reddish with a generous dusting of floury white, under a hair net, and insisted her employees did the same.

Except for Derek. Derek had the most beautiful silky hair in a pale shade of blond I coveted; it was the precise tone I labored to duplicate every month with a bottle of Clairol. When he wasn’t working at the snack bar, Derek’s hair swung just past his shoulders, so bouncy and shiny it could be in a shampoo commercial. But when he was working, he pulled his hair back in a ponytail and shoved it up under a short-haired men’s wig. He looked ridiculous with his off-kilter black bow tie and white shirt, the tails of which were constantly slipping out of the too-big black pants that slid off his hips, and bad rug perched on his head. He must have tried to match his own natural shade but the platinum wig, devoid of shine, sat on his head like a patch of bleached out hay, his darker sideburns peeking out from beneath the bristly fake hair. Derek didn't care that he looked ridiculous. Unlike some of his friends who had to cut their long locks just to work at Sears or the corner gas station, he had an after school job and he still had both his long hair and his mandatory 70’s mustache.

“Be good boy, Derek, bring up tray of chicken, ya? And don't take all day.” Derek would smile all the way to the downstairs cooler where the chicken parts were kept, sneak in a quick smoke and a bathroom break.

He’d come back, taking much longer than he should, like always, and Lena would scold him good-naturedly, like always “Derek, Derek, vat I’m going to do vit you, eh?” and shake her head.

Lena had Derek show me how to keep the grill clean between orders, using the large metal spatula to scrape the grease, beef drippings and burnt cheese into the well at the base of the grill. He made sure I knew to save the left side of the grill to toast the buns and grilled cheese sandwiches and to cook the burgers and patty melts on the right so the flavors didn't get all mixed up.

I watched while he made me his top secret recipe vanilla shake; the muscles in his California-brown forearms tightening as he dove down into the freezer, scooping out the vanilla ice-cream from the large cardboard tub. The secret? Careful to make sure Lena didn’t see, he used an extra scoop of ice-cream and not just one, but two extra-long squirts of vanilla syrup.

He watched, arms folded, leaning back against the deli counter, while I drank it up.

“Okay, okay, you two” Lena admonished “Get beck to verk. Derek, you go downstairs and do chicken, ya?”

Lena checked the time. “Oh sure, ya. You take your break now.”

“Excellent. Can she come too?” He nodded in my direction. “I can show her where everything is.”

“Where everyting is? Go on! Get out of here! You think I’m shtoopit?” She grabbed a clean spatula, and waved it like a weapon in his direction. “A month already, she’s verking here. She knows where everyting is.”

“Oh my Gott” she said to me, laughing as Derek backed away, pretending to fend off her pretend blows.


“That boy? Vat I’m going to do vit him?” she laughed. “Come on, let’s make some fresh coffee, ya? You know the boys will be here soon, they don’t have much time.” It was true. They didn’t have much time. Me? I was having the time of my life.

It must have been the wig that attracted me!
More to the Derek story


If you liked this post, please forward it to a friend or share it on social media.
Just click on the buttons below. THANK YOU!
love memoir podcast relationships Romance Santa Monica Work