F is for The Favor. It's also for Fail. (Or the time I met Brad Pitt) 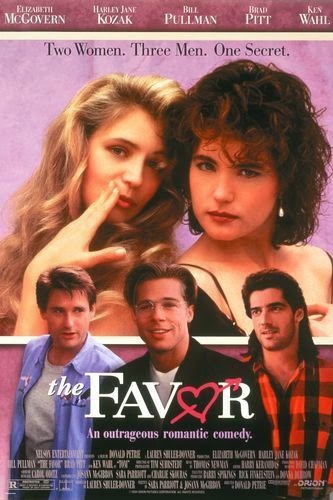 I only worked on a couple of movies during my short-lived career as a production coordinator. By a couple, I mean two. Literally two. The Favor was one of those movies, a film most of you will have never heard of even though it starred Elizabeth McGovern, Bill Pullman and Brad Pitt.
Brad Pitt was just a beautiful young man back then, only twenty four, with the beginnings of a resume; some small parts in episodic tv, nothing noteworthy. The director cast him based on some footage his agent had sent up to our location production office in downtown Portland. It was from the as yet unreleased Thelma & Louise; my boss had seen the video clip and trilled that he was delicious. And we all knew that instead of flying up from L.A. he'd driven up in the cutest little sports car with Juliette Lewis by his side.

Brad played Elliot, an artist and Elizabeth McGovern's love interest, she (Emily) runs an art gallery. The Favor is that Emily's friend (Harley Jane Kozak), a bit bored with marriage to good ol' Bill Pullman, wants Emily to look up her old high school boyfriend, to see if he's as impossibly irresistible as she recalls. Old boyfriend Tom was played by Ken Wahl from Wise Guys and I won't be giving any secrets away to tell you he was terrible; it was so clear he had zero interest in acting at that point in his career and his performance showed it. He was all but done with Hollywood, leaving it all behind and moving to Hawaii or some other paradise, a few years later.
Brad Pitt was a whole different story. He was young and beautiful and barely beginning. They made him wear wire frame glasses in The Favor because otherwise he was just too dazzling to be believable as a painter. He was much more likely to be the paintee.
One of the producers had a bit of thing for Elizabeth so when he learned that Melissa Etheridge was in town, he snatched up a block of tickets and invited Brad and Elizabeth to join a small group of us for the concert. We all met at the Heathman Hotel's bar, just off the lobby, an elegant wood-panelled affair. Known for its upscale and quiet luxury, the Heathman was the hotel where I'd booked all the cast members, the concert venue was directly across the street. Brad and Elizabeth both came, the producer planting himself next to his crush but I think the flirtation ended that night. What I recall is that Brad, as "delicious" as he was, was quiet with little to say that night. There was nothing arrogant about the way he held himself apart, he seemed—despite his intense good looks—simply shy.

Most of us are at our most dazzling —if we are ever dazzling at all — in our mid twenties to mid thirties. It's all downhill from there. A lucky few, the Brad Pitts of the world, are dazzling—inside and out—into their fifties.
We shot the movie in 1990 but the studio shelved the film until 1994; by then Thelma & Louise, True Romance and A River Runs Through It had all been released and it was undeniably clear that Brad Pitt was going to be a major movie star. Alas, the golden boy couldn't save The Favor from itself. Even though the movie was directed by Donald Petrie, the man who put Julia Roberts on the map in Mystic Pizza, the film was a failure. Roger Ebert gave it just two stars. As he indicates in his original review, something went terribly wrong in the third act, taking the adult comedy into wackadoodle land.
Here's a clip which is bringing back a flood of memories, but those are for another day.


A to Z Challenge Brad Pitt Brushes with Stardom memoir