Have you been watching the wise, wild, wackpot, wonderfully real women of Scott & Bailey?

I've previously moaned about how homesick I am for England, and both my parents, now deceased. British telly soothes me, the familiar voices calm me, just as my mum offering me a cup of tea or stroking my head did when I was a child. I admit there are times when I'm not really paying attention, the television program behaving more like beautiful background music.

That's not Scott & Bailey. Written by the remarkable Sally Wainwright who penned both the gritty Happy Valley and Last Tango in Halifax, Scott & Bailey is all about being a strong, capable, complex, crazy woman in a man's world. With some exciting crime show plots thrown in for good measure.

Have you been watching the show? I caught a few episodes here and there on PBS but when I discovered Hulu has the entire series, I decided to get serious and go right back to the beginning. I've just finished season one and am blown away by how fantastically well written it is. The women are so real, so authentic, alternately biting and caustic, and absolutely heartbreaking. Like Happy Valley, this is a cop show that shows the human, private life behind the coppers and it takes your breath away. 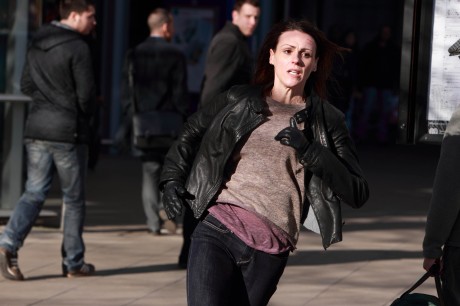 Rachel, played by Suranne Jones is the younger of the two; she's Bailey. Thirty something, single, drinks too much, has a troubled romantic life. She's a bit of a ditz, comes in late, disorganized and distracted but is pure Sherlockian detective; a bloodhound. She will get her man, dammit, even if she has to chase him up and down every alley in Manchester, leaving the audience breathless just watching. But when it comes to "catching her man" in her private life, she's not so lucky. I love how Wainwright shows a woman can be perfectly together in one arena, and not so sharp in another. Er, make that bloody clueless.

As her boss DCI Gillian Murray (Amelia Bullmore) tells her after Rachel lets her personal problems with a man color her decision-making ...


You know. We've all been there. We've all had the piss taken out of us by some ridiculous bloke. And here's you. This is all you've wanted to do all your life, since you were knee-high and now that's your career down the toilet because of him. Mr Asshole Knobhead Nasty Idiot and now, you, you with all your talent and all your training, you, with all your passion and all your commitment, will be lucky to get a job directing traffic. 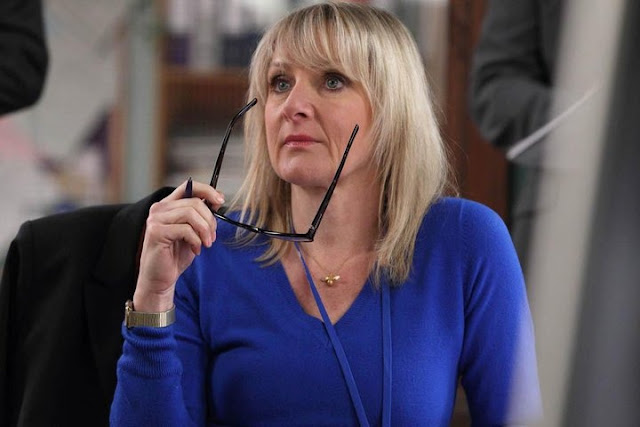 DI Janet Scott played by Lesley Sharp is older, mid-forties, married, the mother of two. Janet, often at work all day and much of the night, relies on her husband to do the kid-ferrying. She's the senior partner, and has the bosses' ear. While Rachel is a mess, she, on the surface anyway, is not. Time and again she weighs in on Rachel's misadventures, often being brutally honest if not downright judgy.

One of my favorite of Scott's lines from season one—Life is short, and then OH SHIT! you die and you never know the day, Rachel. 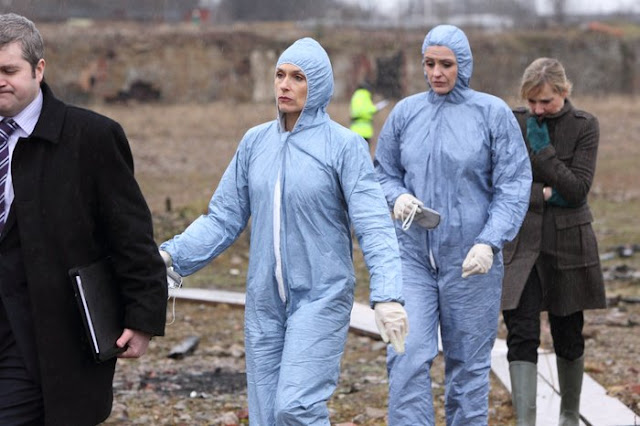 Amelia Bullmore is perfect as the woman in charge, the woman who Rachel calls Godzilla, and sometimes Boss Lady is ferocious, smart, determined. Concerned with how she comes across on camera, she doesn't give a fig when it comes to doing her job. Neither does the show, unafraid to show the women looking ridiculous—but authentic—in their crime scene coverups.

Have you ever seen Mariska Hargitay as Olivia Benson in Law & Order: SVU  looking so absurd? No you haven't. But that's what makes this show so very good. It's so real, so authentic. It grabs and won't let go.