Above Ground on the London Underground—Day 31: From the Ritz to Piccadilly Circus 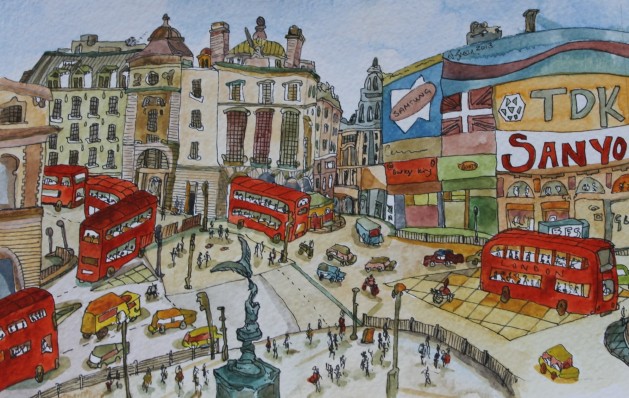 I’m taking a virtual walking tour ‘above ground’ on the London Underground. Using my Tube guide & my fitbit® device, my goal is to walk 10,000 steps a day roughly following along the Underground route, reporting back here on Fridays with my findings. Here are the days that came before. I'm currently following the Piccadilly Line. This is Day 31.

Seeing that we've been roughly following the Piccadilly Line since we arrived at Heathrow way back in October, thirty posts ago, I'm practically hyperventilating to see that the actual Piccadilly Circus is the very next stop on our route. It's less than a ten minute walk to the famous landmark!

I'll have to force myself to stop and smell the roses along the way, as in this part of London there seems to be something of interest every few feet! 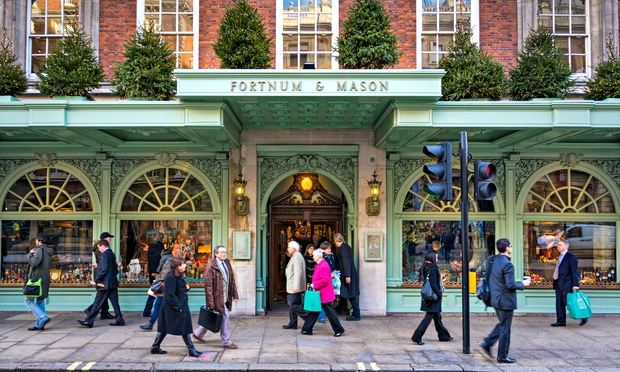 First stop: Fortnum and Masons. Fortnum's—as the locals call it—is a high-end department store where the focus is on food, glorious food. While you can purchase luxe gifts for him—a classic Barbour scarf, a snazzy leather rucksack— and her—an irresistible teapot charm—the store is known for their hampers filled with epicurean goodies. 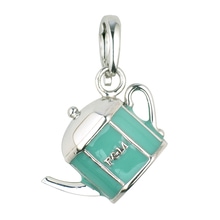 You can even create your own 'bespoke hamper' and stuff it full of whatever you like from caviar and foie gras to marmelade, turkish delight and champagne.

The shop got its start in 1707 when Hugh Mason, who had a small store in St James Market, joined forces with William Fortnum, a Footman in Queen Anne’s household who had the bright idea of selling the Queen's half-used candle wax. These days he might have sold her dirty laundry to the tabloids as well but that's another story. 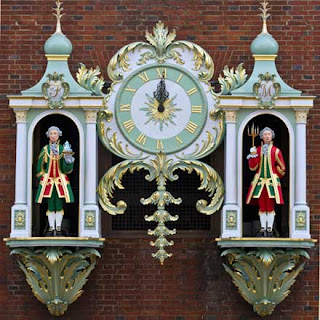 The Fortnum & Mason's clock wherein the founders are said to pop out on the hour.

The store is as famous for its afternoon tea in the Diamond Jubilee Tea Room as it is those gourmet goodies, and while we just had afternoon tea at the Ritz, when in Rome and all that. Besides, look at this lovely colorful plate! It looks as though they've out-ritzed the Ritz.

If we're ever going to get to Piccadilly we can't dilly dally, St James Church aka St James in the Field, the first Christopher Wren design we've visited on this trek, is our next stop. While the Anglican church has a few things going for it besides religion—it's the home base for the daily Piccadilly market, a concert venue and the baptismal site of poet William Blake—it's the Christopher Wren architecture that interests me. 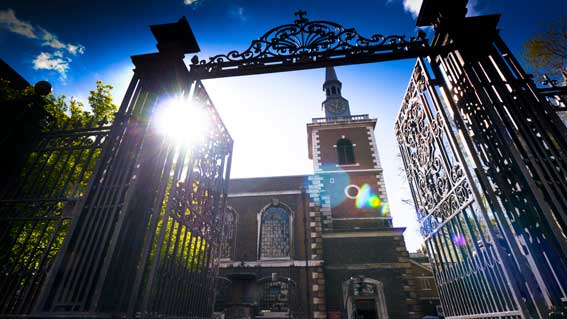 Built in 1684, after the Great Fire of London had destroyed many of London's churches, St. James Piccadilly was new construction rather than one of the 52 re-builds that occupied much of Wren's time. Wren's masterpiece is St. Paul's Cathedral, built from Portland Stone in the English Baroque style and very different from the St. James church, built of red brick and Portland Stone. I'm intrigued by the addition of the Portland Stone as a decorative element. I find the pale grey limestone, mined in Dorset, appealing in contrast to the red brick but I'm in the minority. The exterior has been criticized over the years for its utilitarian simplicity with Joseph Gwilt, an architectural writer and critic of Wren's day, calling it a

'barbarous brick-cased and ill-shaped pile' Joseph Gwilt likened it to the toad which is 'ugly and venomous, yet wears a precious jewel in its head'

The precious jewel is the beautiful interior, detailed but not overly ornate, with an expansive, airy yet solid feel. It does look like a lovely space to worship or listen to music, whichever moves your spiritual side most. 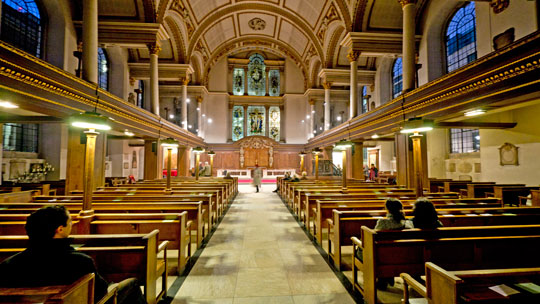 And we're off! Piccadilly Circus is just down the road. This isn't my photo but here's what the circus looked like when I was in London in the 1970's. I was 20 and miserable, staying with my grandmother and uncle for a few weeks, until my parents took pity on me and flew my younger sister over. 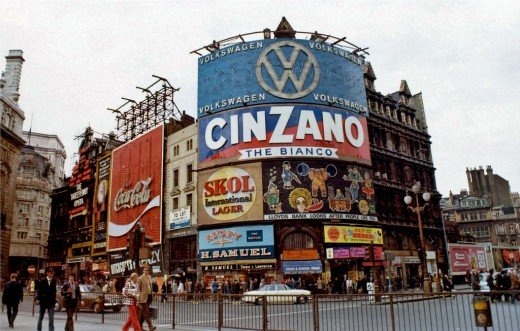 And this is what Piccadilly Circus looked like the last time I was there in the late 80's. 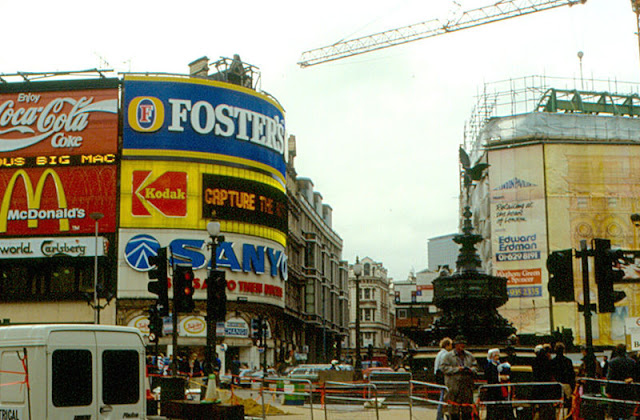 And what does it look like today? I've decided to wait and see! Next week Piccadilly Circus will get the full attention it deserves. Got a recent image of the Circus you'd be willing to share with me and the rest of us for next week's British Isles Friday post? I'd love to share it.

No hassles please, about today's woefully short walk in terms of my 10,000 steps a day goal.