Above Ground on the London Underground—Day 29: Tell it Like it Is at Hyde Park Speakers’ Corner 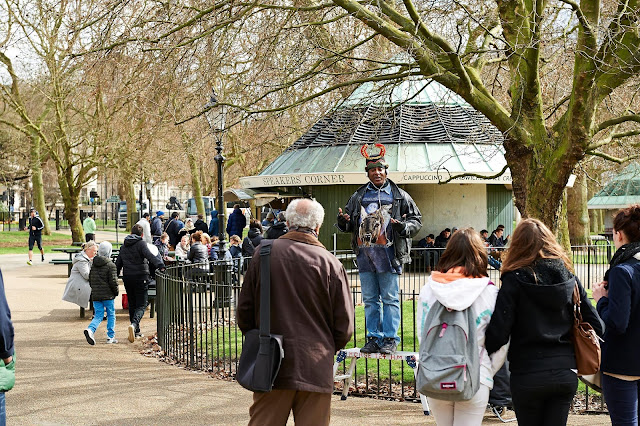 I’m taking a virtual walking tour ‘above ground’ on the London Underground. Using my Tube guide & my fitbit® device, my goal is to walk 10,000 steps a day roughly following along the Underground route, reporting back here on Fridays with my findings. Here are the days that came before. This is Day 29 and we're still on the Piccadilly line.

Twitter. Facebook. YouTube. There are plenty of places these days for people to sound off. An abundance, an excess of spots, from which to tell your point of view. Which sometimes means vomiting all over the rest of us. It’s so easy to do when it’s electronic: write and press that submit post button. Easy. It’s a bit tougher to get up on your soapbox when you have to face your audience in real time. Which brings us to the original soap box, Speakers'  Corner at Hyde Park. 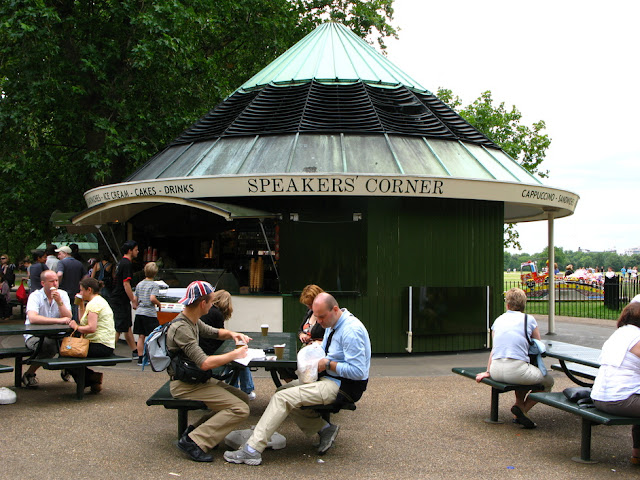 
It’s a short walk from our Knightsbridge hotel, down Knightsbridge Road, the Piccadilly Line rumbling underground beneath our feet, to Hyde Park Corner, but don’t confuse that with Hyde Park’s Speakers' Corner. I have to admit, I did. Speakers' Corner is actually located on the north-east corner of Hyde Park, nearest Marble Arch and Oxford Street, so we’ll take a walk along the edge of Hyde Park to get to it. Not to worry, we’ll come back to Hyde Park in another post, I don’t want to miss this beautiful park where we’ll find the Serpentine and Princess Di’s memorial fountain. 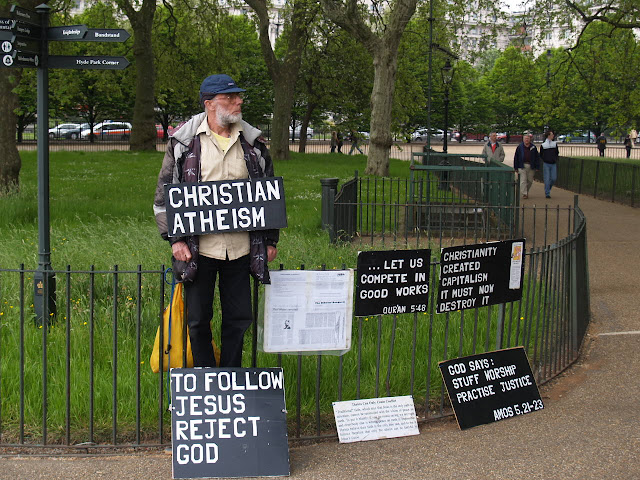 ‘A friend who bullies us is no longer a friend’

A place to safely have your say, the corner is known for it’s eclectic gathering of voices. Some are crackpots and cranks, others are conscientious voices weighing in on the issues of the day. Anyone want to bet that we’ll find someone weighing in on the scary Repubican nomination by default of the Donald?  You think you’re freaked out, your friends across the Atlantic aren’t any happier about Trump landing the nomination, than Hugh Grant's prime minister was about the American president (Billy Bob Thornton) making passes at his Natalie in Love Actually. Maybe even more so. At this moment Sadiq Kahn has won his labour party's bid for Mayor of London. As a Muslim, he wouldn't even be allowed in Trump’s version of America. I can imagine Londoners ranting and raving on this historic spot about that! 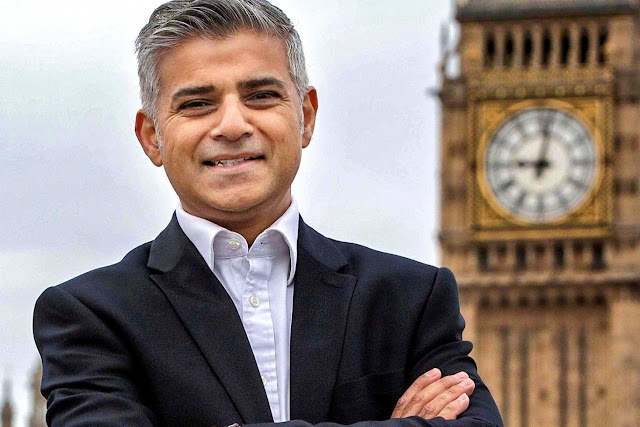 While an Act of parliament set aside this area of Hyde Park for the public to make speeches back in 1872, its roots go back much farther than that. In 1196 the Tyburn Gallows were installed close by, and up until 250 years ago, prisoners were still being hung there. Like a Donald Trump rally, the executions were public spectacles that drew huge crowds, a paying audience there to watch with morbid fascination.


On the bright side, criminals condemned to die were given the chance to make one final speech. Famous—or infamous—last words as it were. They might confess or insist on their innocence. Some blamed the authorities, the nasty buggers who put them in this predicament.

Predictably, the hangings got a little too unruly and were moved to Newgate Prison. The tradition of protesting on the corner remained. 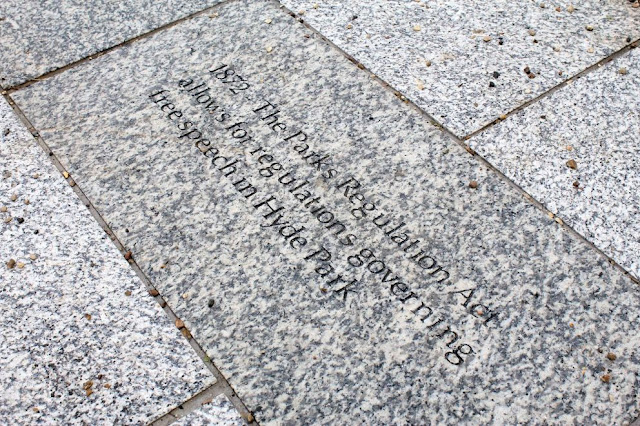 The tradition became law in 1872 when an act of parliament set aside this part of Hyde Park for public speaking, where anyone can go and expound their views, so long as you do it legally.(aye there’s the rub) Free speech doesn’t mean hate speech but beyond that, the area is open to anyone. Even you! Seriously, no one is going to ask for your British citizenship, have at it.

Lenin, Engels (who cowrote the Communist Manifesto with Karl Marx), author George Orwell, our crafty friend William Morris, designer and socialist, and Suffragette leader Christabel Pankhurst are among the myriad of voices who’ve had their say at Speakers' Corner. From 1906 to 1914 the Suffragist movement used the area as a rallying point with over a quarter of a million women marching to Hyde Park Corner in 1908. In 1913 the police banned the women from meeting in the park, but the women continued to do so. Whether it was the peaceful marches and speeches or more violent strains of the suffragists, it took years to achieve the vote. 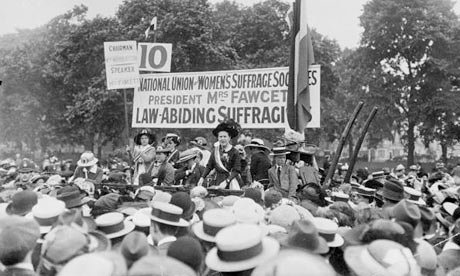 Those protests—young ladies who might forget that women didn’t always have the right to vote—is how some women finally got the vote in England. Note that initially the vote was given only to “women over the age of 30 who were householders, the wives of householders, occupiers of property with an annual rent of £5, and graduates of British universities.” It wasn’t until 1928 that women really achieved voting equality with men. While American women were granted the right to vote in 1920, American women are still waiting for the first female president while English women saw the first female prime minister way back in 1979. What’s that about?


Back to Speakers’ Corner ... what’s on your mind? 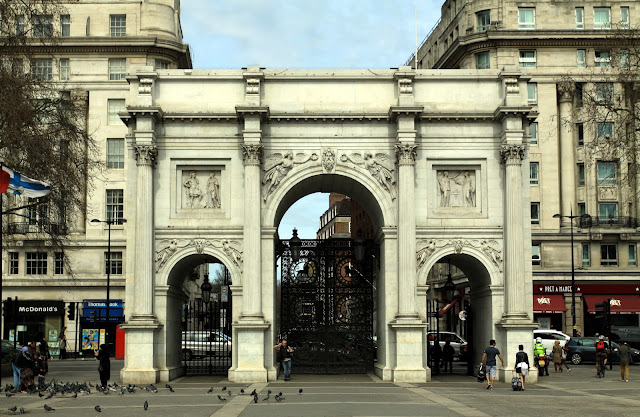 While we’re in the hood, we’ll give the Marble Arch a quick look, bearing in mind we’ll be back for another look later on our tour.


My Map is Broken!

Bear with me, my technology functions aren’t working today! I’m late getting this out because I’ve been trying to embed my map as usual but it ain’t happening. You can see the route I took here: my route but I can’t embed my map for you today. Sorry!