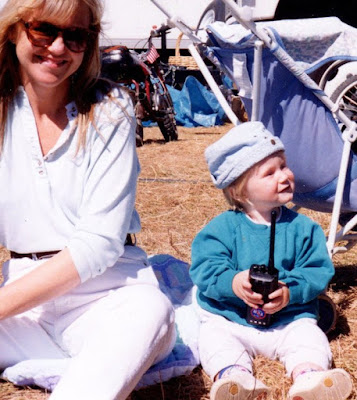 Originally published in the Daily Breeze.

I thought you might get a kick out of this old piece about being married to a guy in the film biz. How old? It’s so old it goes back to the days we used pagers to communicate.  It’s so old my then-four year old son turns 23 in a month, We’re talking old.


I'm not a single mother but sometimes I feel like one.

My husband works in the film business. If you're thinking screenings, A-list parties and hobnobbing with the stars, think again. Think 16 hour workdays, dinners without Dad, two minute sound bytes that have to pass for conversation and late-night, long-distance phone calls from a burned-out spouse on location.

Think about the grilled swordfish he had for supper on the set versus the Kraft dinner I split with my kid.

"The swordfish?" he says, when I ask how his meal was. "It was a little dry."

We had macaroni in the shape of Pokemon. Yummers.

Then there's the glamour of exotic locations like St. Petersburg. Russia, not Florida. He was gone for three months. That's a long time.

So long that I was reduced to watching "Pocahontas" over and over again with our son. An animated character? At least I could hear Capt. John Smith's voice, see him move. And those kisses... like I said, three months without your husband is a long time. You get a little - shall I say, edgy?

"Hush" I'd say, stuffing a Hershey's bar in his hand, "we're getting to the good part."

These days my husband's home. Sort of. Yesterday he left for the set at 5 a.m. and didn't return home 'til past 9 that night. Just in time to help with Operation: Cough Medicine. Even with all the cajoling and coaxing, it's still a two person job. One to distract and one to dispense.

Though we didn't actually have to pin our son down, I did have to use my hands to keep his feet from kicking the dropper out of my husband's grasp.

Afterward, Dad read a few pages from Peter Pan before I took over in an effort to get the sleepy-byes show on the road. But it was one of those nights.

You know:
First our son examined his pj's for the pink spot -- "Where's the place Daddy spilled the medicine?"

Then he remembered he hadn't brushed his teeth yet.

"Good job for remembering" I told him, guiltily wishing he would just go to sleep, scummy teeth and cavities be darned.

Then he had to go potty.

Last were the prayers.

I counted to ten and tried to explain.

By the time he was asleep and I went to find my husband, it was close to 11 and my husband was out. Out, as in splayed across the white comforter on our bed looking like a kid making angels in the snow. Do angels snore? Mine does.
I was disappointed. No time for just the two of us. Worse, no time to ask him to make a late-night milk run. Mercifully, I found an old jar of hazelnut-flavored Coffee-Mate with some caked up powder at the bottom and left it on the counter.
This morning I found a fresh quart of milk in the fridge. He must have popped out to 7-11 before he left for work. Without even being asked. I'll have to remember that the next time our little boy asks me, "Mommy, what's bless mean?"

I'd like to call and and tell my husband thanks for being so thoughtful. Except I can't phone him on the set. That's when I thank God for pagers.

Our system is simple. I page him and he'll call me back. We've got a code. Our number means call when you get a chance. Plugging in 411 means I've got a question. Adding 811 means make it snappy. A bona fide emergency is 911.
Unfortunately we don't have a code for "thank you", let alone "thank you for picking up milk before you left for work when you must be exhausted and are you sure this is what you want to do for the rest of your life? We miss you." Nope. No code for that one.

I use the next best thing and power punch in 7's until my fingers hurt. I don't even bother with our number. He'll know it's from me. He better. 777 means I love you. I picture his face when his pager goes off and all those sevens flood the tiny screen. I think he'll get the message.