The First Time I Saw Paris 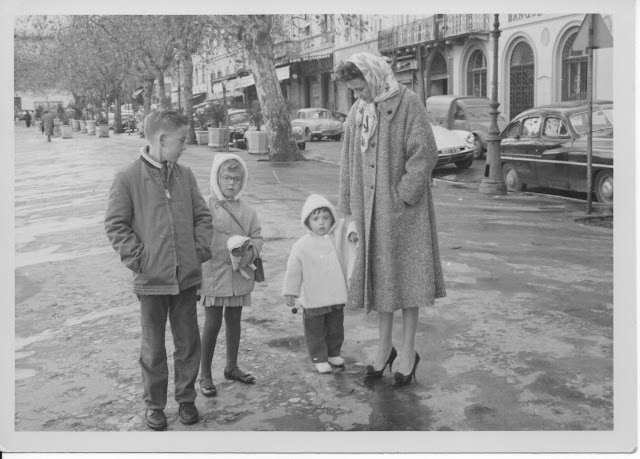 That's me with the glasses and the sensible shoes. Look at the height of my mother's heels!

The first time I saw Paris it was December, 1958 and I was five. The old family photos show that when it wasn't dripping wet, the sky was a dull steely grey. This wasn't Paris when it sizzles, this was Paris when it drizzles. Cold. Miserable. Could it be that it just looks that way because the photos are black and white? Could be, but we had just left Tripoli where the sun blazed all year long; that wintry Parisian nip must have been shocking.

Little did I know my parents were about to take me out of the fire into the frying pan, or to be more accurate, out of the fire into the icebox. After several years of living in North Africa, we were on our way to Canada. Canada where we would arrive, by boat, in Halifax, Nova Scotia in the middle of winter. Average temperature: Below freezing. Brrrr, baby, brrrr! 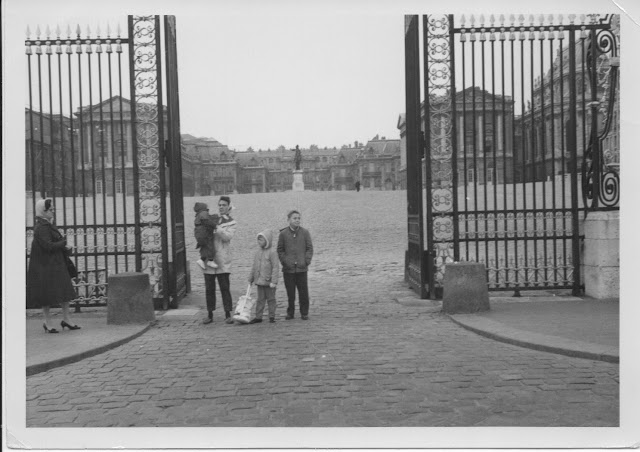 But first, that stopover in Paris. My parents dragged us everywhere, from the Louvre to the Palace of Versailles where we had the grounds to ourselves. My paltry memory of the Louvre museum is pure speculation, derived from my mother's tale of having to wash and dry a nappy on the radiator because Nancy had wet herself and somehow in those pre-Pampers days, my mother was without a backup cloth diaper. I can almost smell that humid bathroom, the radio hissing urine. My poor mother, dying for a taste of French culture, three small children whining at every turn.

It was 1973 before I would go to Paris again. I was twenty and my sister Nancy —Oui, like the city! we would come to say—now completely potty-trained at sixteen, was my traveling companion. We stayed at a dirt-cheap pension in the Pigalle and had our first taste of real French croissants at an outdoor cafe on the Champs Élysées. Starving, we demolished the entire tray. The price of the bill took our breath and much of our daily budget away. We hit the Louvre but had little patience for the crowds fighting for a glimpse of the Mona Lisa. Our parents had a giclee print hanging in our apartment back in L.A.; we were less interested in seeing DaVinci's masterpiece up close and in person than we were in sitting at an outdoor cafe, a reasonably priced outdoor cafe, sipping café au lait, and checking out the cute French boys walking by. The Palace of Versailles? No time; we couldn't wait to get to the south of France and the beaches of the Cote d'azur.


It would be another 16 years before I returned to Paris in the summer of '89. In my mid-thirties I was there with my friend Mindy who was a decade younger. I was back to being single after breaking off a long-term relationship and Mindy decided to join me on my two-month tour of Europe. It was the Bicentennial, the 200th anniversary of the French Revolution, and like all the other people pressed into Paris that July, we were excited to be there for the big Bastille Day parade. The city was celebrating and the air was electric, the streets filled with a jumble of English and French, German and Italian, the sound of French horns and the steady moan of police sirens. The cafes were full, the café au lait, frothy and delicious, the simple crepes made with sugar and Grand Marnier, intoxicating. 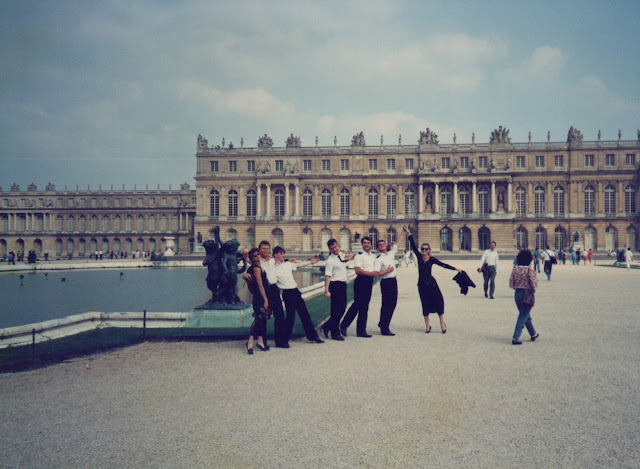 We were having a marvelous time, feeling free, liberated, taking goofy photos, and enjoying the rush of just being there. Having a giggle together, like we did with the group of military guys we ran into at the Palace of Versailles. There they were, in their black and white uniforms. There we were, in our basic black. A photo seemed inevitable. And then we were gone. Poof. It was nothing. A brief brush with flirtation, a laugh, and au revoir. Fun. We were having fun. I hadn't thought about men, the possibility of meeting them, the perils of what traveling with a much younger woman, would do to my psyche. Admittedly, French men still held a certain je ne sais quoi. The accents, that wiry body type, the dark hair, the lean and hungry look, the devil in their eyes. Or is it just wishful thinking on my part that all French men look like Alain Delon and Louis Jordan? Perhaps Gerard Depardieu is really the Gallic norm. 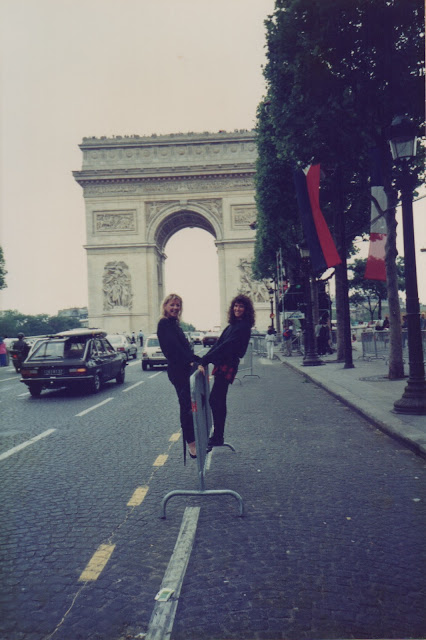 "Tell your mother you'll meet her later" he whispered too loudly in Mindy's ear. "Come, let's go somewhere for a coffee.”

She didn't of course. She told him to take a hike but I was mortified, wounded. Her mother! I knew I looked older than her, of course, I did, I was older than her, but did I really look old enough to be her mother? It was a sour taste that all the café au lait in Paris couldn't wash out. The wound I got when a stray firecracker hit my leg at the Bicentennial celebrations later that night didn't help. That one was easy to mend though, a trip to the medical tents set up by the Croix Rouge and I was good as new. That other wound cut more deeply. Luckily Paris was just the first stage of our adventure; we had the entire summer ahead of us.

Do you remember the first time you saw Paris? The last?
Isn't it stupid that all these years later I still remember that awful man?
Do you have any travel memories you'd like to forget?