Above Ground on the London Underground—Day 49: The Marble Arch (RIP Leonard Cohen) 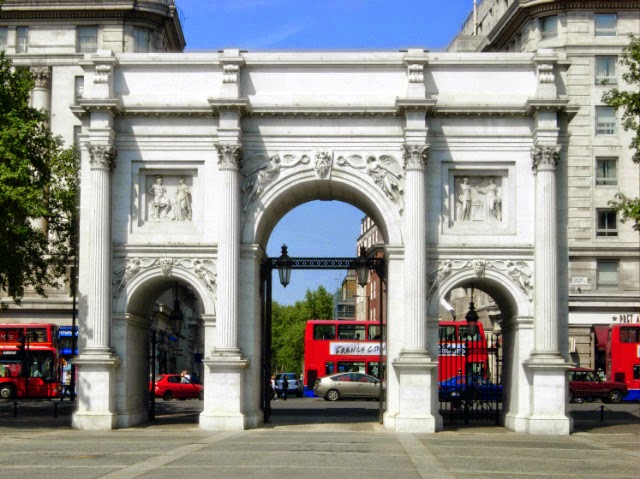 The Marble Arch via onelondonone.blogspot.com

If it's Friday we must be back in London. Every Friday I take a virtual walking tour ‘above ground’ on the London Underground. Using my Tube guide & my fitbit® device, my goal is to walk 10,000 steps a day roughly following along the Underground route, reporting back here on Fridays with my findings We're currently following the Central Line. Here are the previous days. This is Day 49.

We ended our virtual walk a couple of weeks ago at the Marble Arch, the second time on this cross-city trek we’ve had it in our sights. This week, with the passing Leonard Cohen, it’s time to stop and pay our respects, the lyrics of Cohen’s song Hallelujah—some of the most discussed (and changed) lyrics ever written— echoing in our ears.

Am I going to try to analyze Cohen’s lyrics? No, I’m not. That’s been done to death: biblical references tied up with love and sexuality, spirituality, the glory of love, its ultimate failure. Yet in the end, worth it, because it’s all we’ve got. It’s a glorious song that strikes deep chords within us all.

Now I’ve heard there was a secret chord
That David played, and it pleased the Lord
But you don't really care for music, do you?
It goes like this
The fourth, the fifth
The minor fall, the major lift
The baffled king composing Hallelujah

Your faith was strong but you needed proof
You saw her bathing on the roof
Her beauty and the moonlight overthrew you
She tied you
To a kitchen chair
She broke your throne, and she cut your hair
And from your lips she drew the Hallelujah

Baby I have been here before
I know this room, I’ve walked this floor
I used to live alone before I knew you.
I’ve seen your flag on the marble arch
Love is not a victory march
It’s a cold and it’s a broken Hallelujah

There was a time you let me know
What’s really going on below
But now you never show it to me, do you?
And remember when I moved in you
The holy dove was moving too
And every breath we drew was Hallelujah

I did my best, it wasn’t much
I couldn’t feel, so I tried to touch
I’ve told the truth, I didn’t come to fool you
And even though It all went wrong
I’ll stand before the Lord of Song
With nothing on my tongue but Hallelujah

The 19th century landmark was designed by acclaimed British architect John Nash in 1827. Nash modeled the Marble Arch on Rome’s Arch of Constantine, dating to the fourth century. Featuring Corinthian columns and three arches—one large central arch and another on either side—the arch is faced with white marble and topped with sculpted relief panels representing England, Scotland, and Ireland. Initially meant to be the state entrance to the cour d’honneur of Buckingham Palace; standing near the site the central projection of the palace containing the balcony. The arch proved too small for the royal coaches to pass through and was moved to this location in 1851, hence its incongruous location on a traffic island where Park Lane and Oxford Street meet the Edgeware Road.

What are the flags that fly at the Marble Arch? These days they are usually the flags of the European Commonwealth. What did Cohen mean by the
“I’ve seen your flag on the marble arch
Love is not a victory march
It’s a cold and it’s a broken Hallelujah’’


That love is a dangerous thing to gloat over, that it’s fleeting? You tell me!

There are many versions of Hallelujah and with Cohen's death, there will be many more. Here’s his, or one of his anyway. Cohen, like many others, often changed the lyrics.
Thank you Leonard Cohen, for touching us in deep and profound ways. Hallelujah.

Next week we'll get back on track with a trek from the Marble Arch to Chancery Lane.