Above Ground on the London Underground—Day 59: The birthplace of Alfred Hitchcock ... and David Beckham 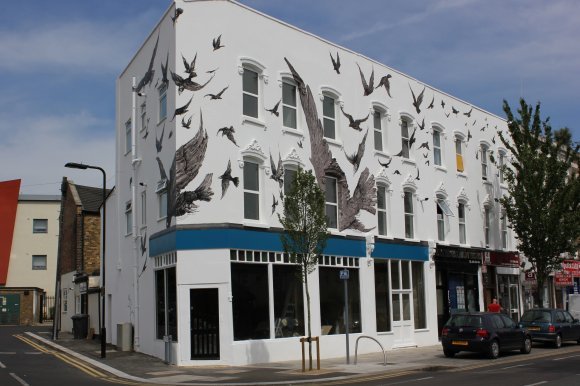 If it's Friday we must be back in London. Every Friday I take a virtual walking tour ‘above ground’ on the London Underground. Using my Tube guide & my fitbit® device, my goal is to walk 10,000 steps a day roughly following along the Underground route, reporting back here on Fridays with my findings We're currently following the Central Line. Here are the previous days. This is Day 59

Just when I thought I couldn’t walk another step along the route covered by the Central line, I find out from my pal with the googly eyes that the master of suspense, Alfred Hitchcock hails from these here parts! Born above his father’s greengrocer’s shop at 517 High Road in Leytonstone, Hitchcock is the area’s most famous son but don’t tell that to David Beckham who grew up in the area too. 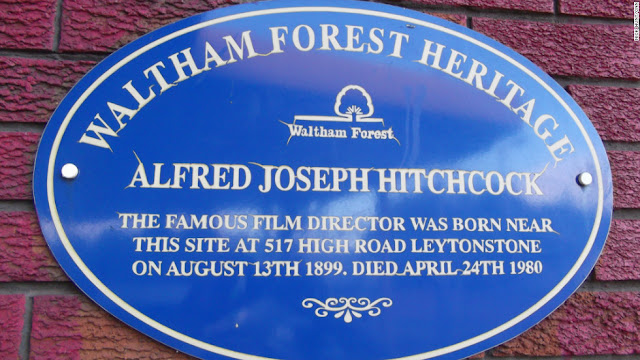 While Hitchcock’s boyhood home was knocked down years ago, in its stead there’s a gas station—sorry— petrol station and a nice blue plaque. 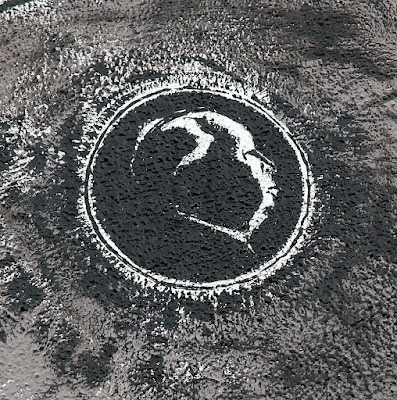 Nearby on the High Road, a pair of artists covered a building with birds to honor Hitchcock. You can see the building at the top of the page. Odronby even managed to paint a portrait of Hitchcock within the eye of the biggest bird. 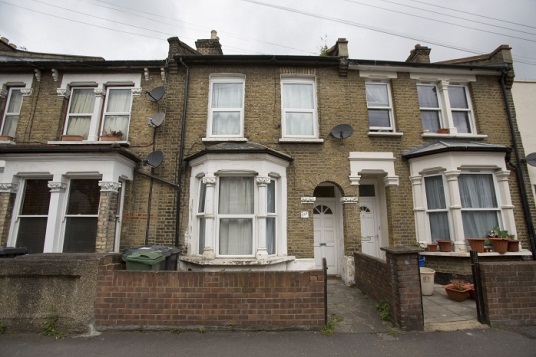 You can still stop by Beckham’s old house at 155 Norman Road.

The area also features blocks of flats named in the great director’s honor; Marnie Court and Topaz Way, plus there’s an actual Hitchcock Lane. Not much to look at. Disappointing? Here in California up in Bodega Bay, where Hitchcock filmed The Birds, the church and school remain but little else is recognizable. A small cafe calls itself The Birds Cafe, inside there are a couple of photos but the staff has no idea about any of it. Was this cafe used in the movie, you ask, wondering if you’ve missed something. What happened to the Tides restaurant? They don’t know. Or care. They look at you like you might be a little crazy for asking where did Tippi Hedrin take the little motorboat out.

It’s too bad time can’t stand still like it does in the movies; it would make paying homage much easier. At least there’s a plaque! Here in Los Angeles at the home where F. Scott Fitzgerald died, there’s not even that! 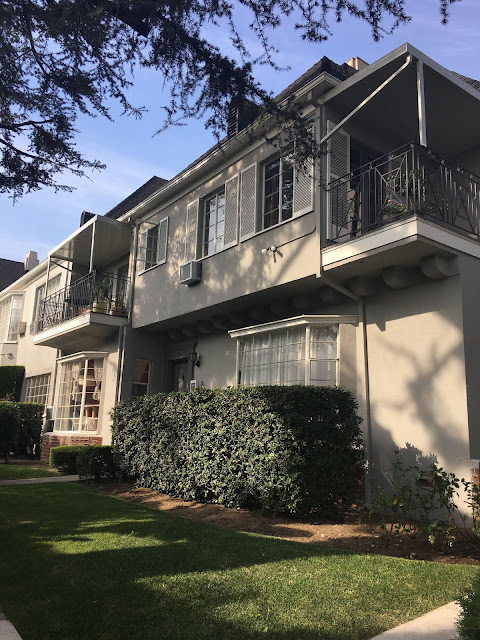 My photo of the Hollywood apartment where F. Scott Fitzgerald died.
It was the home of his mistress, gossip columnist Sheila Graham.
There is no plaque. 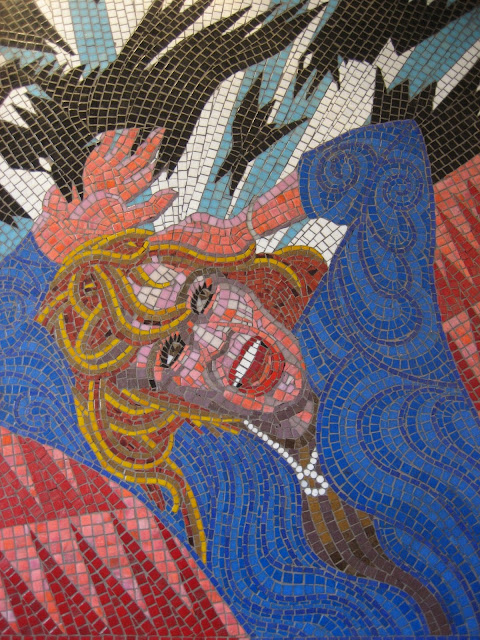 And there are some lovely mosaics (17 in all) just up ahead on the walls outside the Leytonstone Station, depicting scenes from his life and his films. Four Hitchcock classics I’ve nabbed. I bet you don’t need me to identify the movies for you! 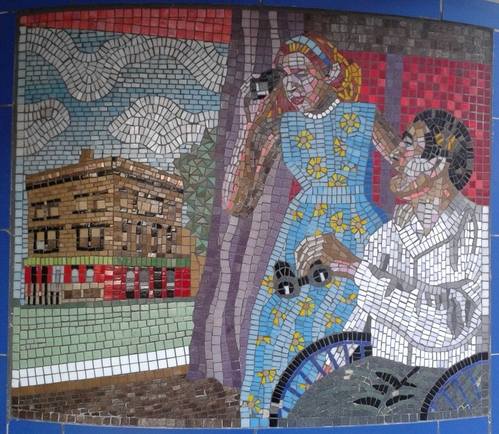 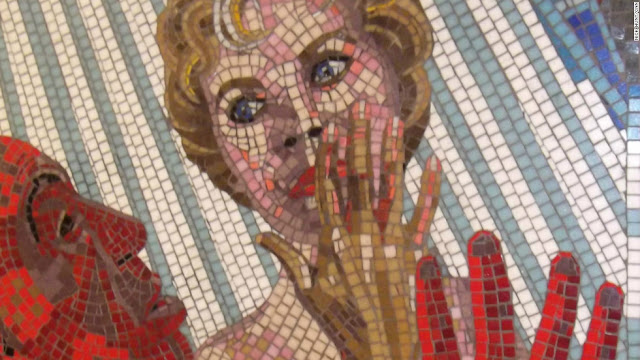 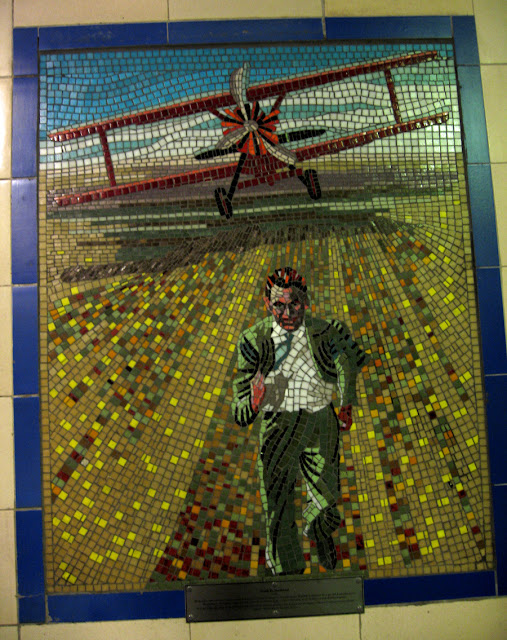 Done with the Hitchcock home town tour? Not quite. Up ahead on the fringes of Epping forest is the Sir Alfred Hitchcock Hotel. What does it have to do with Hitchcock? Did he stay there, eat there, shoot a film there? None of the above as far as I can see but for some reason they have license to use his name. I wonder how that works in England. Do they need permission from the estate, do they need to pay some sort of licensing fee?

That’s got me curious. If you were going to name a hotel—or a pub, a restaurant, whatever, is there a famous person you’d name it after? I’m debating between the Redford Inn and the Gosling Arms.

Instead of heading off to the Snaresbrook Station, instead I’ll check in to the Sir Alfred Hitchcock hotel for the night and mull over my decision. I have a feeling I’ll be sleeping with the light on.