Above Ground on the London Underground—Day 65: Jack the Ripper is Alive and Well in London 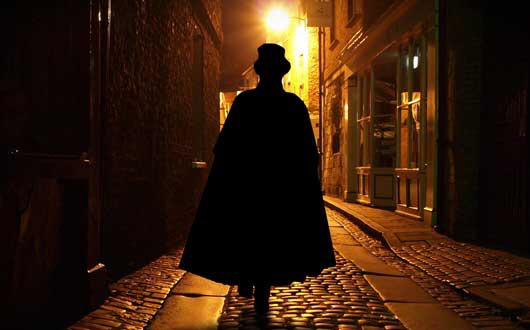 We're back on track. If it's Friday we're back in London, taking a virtual walking tour ‘above ground’ on the London Underground. Think of me as an armchair traveler, using my Tube guide & my fitbit® device, my goal is to walk 10,000 steps a day roughly following along the Underground route, reporting back here on Fridays with my findings. We're currently following the  District Line. Here are the previous days. This is Day 65

Not far from Tower Bridge, we’re close to Aldgate and Whitechapel, home to the Jack the Ripper murders. To be honest, I never bothered with the BBC Ripper Street television series and it’s possible if I weren’t so hooked on contemporary British police shows, that I wouldn’t be interested in Jack the Ripper at all. 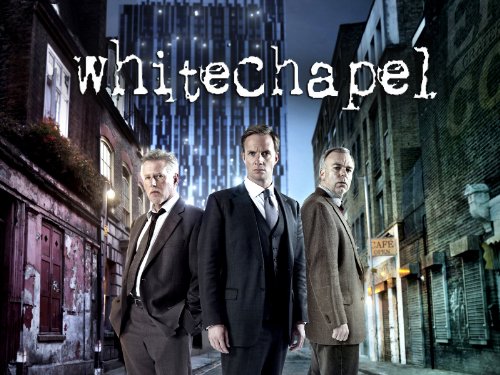 But I did get hooked on the 2009 Whitechapel television series starring Rupert Penry-Jones as D.I. Chandler—tall, aristocratic, posh and absolutely neurotic—with Phil Davis as D.S. Ray Miles—who many of you know as Jud from Poldark—and Steven Pemberton as Edward Buchan, a historian and Jack the Ripper tour guide, author and expert, who uses the Jack the Ripper killings as a template to solve modern day murders. At this point I can’t imagine taking a trip to London without taking in a Ripper tour.

Ah, but which tour? There are two that come up time and again. I need your help in narrowing it down to one for the real trip my husband and I will be taking to London—for real—in May. 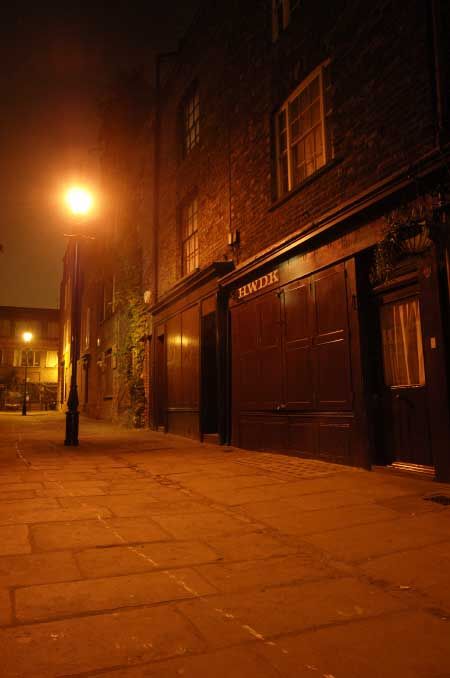 Puma Court, near the Ten Bells Pub still as it was around the time of Jack the Ripper. Photo credit @RipperTours

The company is proud to be recommended by the Jack the Ripper bible, The Complete Jack the Ripper A to Z, which actually calls out two of the company’s guides, Philip Hutchinson and Richard Jones, in particular as “…one of London’s leading walking-tour guides”.


The tours big claim to fame is in part that its guides are Ripper experts who’ve written books on the subject and who’ve been on TV quite a bit. Not unlike our friend, Edward Buchan from Whitechapel. In addition to Jones and Hutchinson, the tour employs other guides, all of whom who have bios you can read on the website. There are also previews of their tour available for viewing.

The video below featuring Richard Jones is fascinating but I know that the actual tour won’t have music and the re-enactments the video makers use. On the plus side, the tour does include pictures—which you can handle yourself— found by the guides in researching their books.

A great guide makes all the difference but it’s not clear to me whether you can book with a particular tour guide. Still, a visit to the website where you can read the bios of the guides and watch a preview of their tours is a fascinating way to kill time while learning a bit more about the Ripper before you go.

Details: Tours depart 7 days a week at 7:00pm  from the Aldgate East Station, Exit 4 and last a little under two hours. 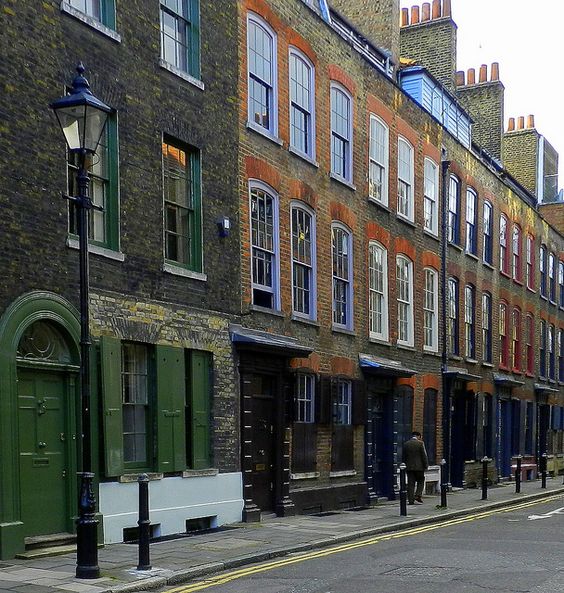 
#2 The Jack the Ripper with RipperVision Tour

We could take our own walking tour—the tour’s itinerary is posted below, available on their website—but the idea of the guide’s using handheld projectors to screen images along the way sounds like an great way to enhance the experience. 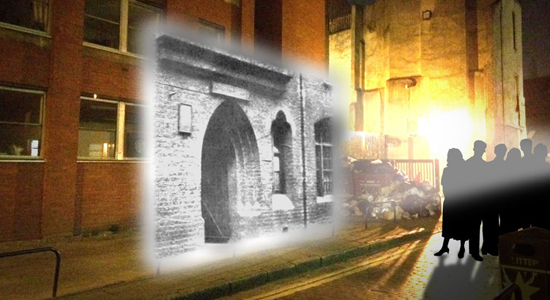 The Whitechapel murders were committed in or near the impoverished Whitechapel District in the East End of London between 3 April 1888 and 13 February 1891. The death of Emma smith is the first to begin the Whitechapel murder file and a prelude to the emergence of Jack the ripper. Hear the brutality of her murder and learn its importance.

The scene many experts claim to be the first Jack the Ripper murder, this cobbled stone lane way remains a great starting point in our tour as you can instantly feel the sense of a bygone era, of gaslit streets, dark corners and quiet footsteps in the night, as the ripper lay in wait for his victims. Learn how the death of this one woman began the Autumn of terror.

One of the last sightings of victim Mary Ann Nichols before her mutilated body was discovered in Bucks Row on the night of 31st Aug 1888. This building and its surrounding area provide a great insight into the social living conditions and the everyday fight for survival in londons East end. Learn what life was really like in Victorian london.

The body of Annie chapman was discovered here in the early hours of 8th sept 1888, her throat cut across, her body horribly mutilated. What clues did the killer leave?... What does it tell us about him?

See the emergence of Jack the ripper in a series of penned letters, sent to the central news agency during the Autum of Terror, they were written in blood red ink and sent with half a human kidney. These letters have been subject to debate ever since... are they hoaxes?... or are they the words of the killer himself?

Prepare to be transported back in time as we take you into the heart of Jack the Rippers London. Wilkes street remains practically untouched since those cold, gaslit nights of the 19th century, the surrounding buildings will conjur up images of a bygone age... a time of darkness... a time of fear... a time of the Ripper.

The Death of Elizabeth Stride

Elizabeth Stride (long liz) body was found in Dutfields yard off Berner street in the early hours of 30th september 1888, her death was only the first in a night that would forever become known as the double event. This was the night that could have revealled his identity. Find out how jack the ripper may have been caught so easily as we follow his blood trail and examine the clues. 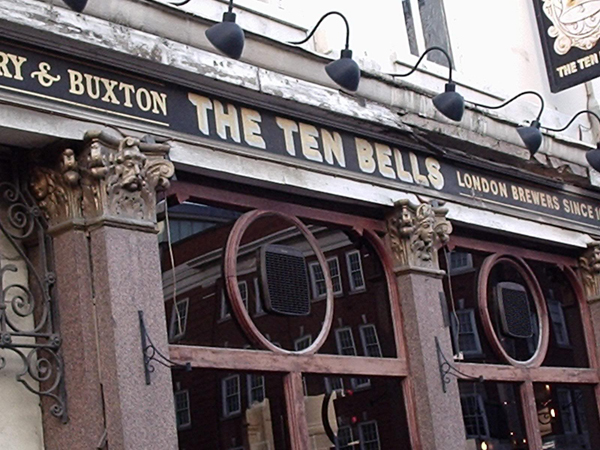 On the corner of Commercial Street and Fournier Street in Spitalfields stands perhaps the most famous pub in Ripper history. The Ten Bells. It is here that some if not all the victims frequented and perhaps even the Ripper himself... Across from the front door, a sight which would have greeted everyone associated with the ripper case... Christ church. This famous landmark made famous by the movie "From Hell" stands in the very heart of the Ripper district.

The 30th September 1888 became known as the double event when the Ripper killed twice in one night, we visit the original cobble-stoned square, investigate the evidence and find out how the ripper evaded capture. Hear the shocking facts in one of the rippers most violent crimes.

The night of the double murder left perhaps one of the most important clues in the entire case... What was it? And does it help solve the mystery?

The Rippers final victim was found in her small room of 13 Millers court on 9th Nov 1888 and was the most savagely mutilated victim of them all. We visit the murder sight and recreate the final moments of the rippers reign of terror. Over a century later the police photo is very disturbing and in the words of her landlord, John McCarthy, "...more like the work of a devil than the work of a man..."

As I said, we could put together a pretty complete tour on our own but I’m intrigued by the added value that the visuals bring. And the tour does one other thing. Using what they call ‘modern criminal profiling’ the tour guides reveal the man police should have been hunting all along.

Details: Tours depart 7 days a week at 7:30 from the Whitechapel Art Gallery at the Aldgate East Station, Exit 3 and last a little under two hours.

There are other Jack the Ripper Tours plus a Jack the Ripper Museum. I’d like to narrow it down, and choose between these two. Have you taken a Jack the Ripper tour? What do you recommend? If you haven’t, which one would you choose? They both sound pretty good but we’re leaning toward the dramatic appeal inherent in Rippervision.

Please make a choice and let me know in the comments section. I NEED you!