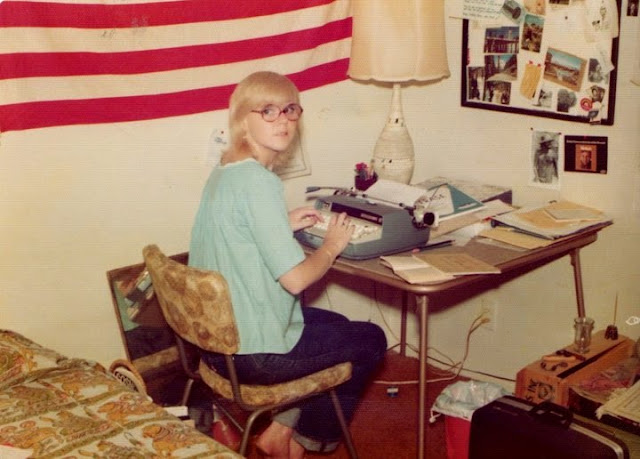 I submitted my first piece of writing when I was seventeen, a story about my first job, working at the employee cafeteria at General Telephone where my mother was a dispatcher. Rolling the 20# white bond backed by a sheet of thin blue carbon paper into my Smith Corona, I typed it out slowly, carefully, on a piece of erasable paper—and mailed it off to Cosmopolitan along with a cover letter. Not just to any editor at Cosmo, by the way, I sent it directly to Helen Gurley Brown.

The piece itself, meant to be comical, was full of clumsy attempts at self-effacing humor.  I strived for a similar tone in the cover letter I addressed to Brown, completely clueless that the high powered editor in chief wasn’t the one reading unsolicited manuscripts. After I signed off I added the following PS. I could have said I was Joyce Carol Oates. What I thought that would accomplish I can’t imagine. That an unsatisfactory submission would get published because of a lame joke?

No surprise, in the SASE I’d enclosed—the way it was back then, no popping off a manuscript via the pushing of a key on your computer—I got a rejection slip by return mail. On it, someone—an editor or more likely an editorial assistant—had written a note: Why didn’t you say you were Joyce Carol Oates?

The answer to that question was simple and both the editorial assistant and I knew it. I didn’t have the talent and the requisite depth of understanding to pass myself off as Joyce Carol Oates. I was mortified at the dig.

And yet. Some small part of me took comfort in the rejection simply because it came with that personal—if cutting—note. I turned it over again and again. I understood my writing wasn’t good enough, that my work was being rejected, but there had been something about it—the work, my letter, me, I wasn’t sure which—that prompted a response. A response that felt like a teacher’s “Keep trying, I think you can do it.’’

That “No thanks, but ...’’ notion has kept me writing for most of my life. With just enough publication crumbs scattered along the way to keep me from slitting my wrists with the letter opener I used on all those returned self-addressed stamped envelopes with rejection slips tucked inside. Rejection slips which were often simply small preprinted, impersonal rejections but which sometimes, sometimes contained magic words hand-written in the margins. “This isn’t for us but we’d be interested in seeing more.’’ “Nice but not what we’re looking for right now.’’ Or simply “Try us again’’ from the New Yorker. That one really kept my fingers on the keys.

I rewrote that long ago piece a couple of years back, I’m not at all sure I made it any better. Like a typo on the erasable bond paper we used to type on, the humor has been eradicated.

For what it’s worth, this is how it begins. I’ve added a link in case you want to read more (because I’ve sold it so well!)


Miss Mouse Goes to Work  Have stupid title: must rethink

I woke to the ringing of a far off phone; I knew without opening my eyes that the light beyond my bedroom window was still grey, the sky and the sidewalk matching shades of slate. Too early to even think about waking up. I burrowed deep into my pillow, desperate to stay in that sweet half-sleep state when the morning can be anything you want it to be. I’d stay in bed until about ten, then, like most days that summer, I planned on hitting the beach with my best friend.

It wasn’t just the ringing phone barging in uninvited from the living room of our apartment or the daylight’s insistence on pushing past the window, my mother’s voice was breaking through too, the musical tones of her English accent getting louder, clearer, closer. Then came the knock on the bedroom door. I gave it my back, tugged the covers over my head; my last remaining chance at peace was to fake being asleep but I’d never be able to pull it off if my mother got a good look at my face. I’m a lousy liar. I can’t help it, the truth writes itself all over my face.

Read the rest of the story