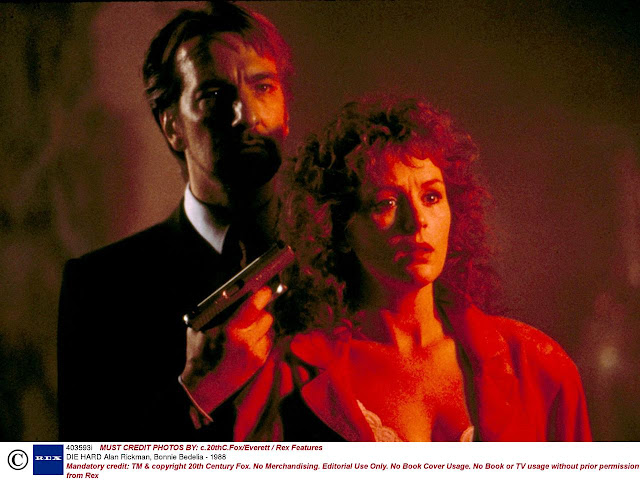 This appeared originally on Chapter1-Take1 where I post my book-to-movie stuff but this memory feels more at home here. I’ll file it under Brushes with Stardom.

I have only been to a handful of premieres in my life. One of them was Die Hard back in 1988. I was working at producer Joel Silver’s offices on the Warner Brothers lot in Burbank at the time. Burbank being the real Hollywood back then. Simply put, I was an office p.a., a gopher, but nobody really calls them that. My friend Connie, an executive assistant to Silver, got me the job when the LAUSD teachers went on strike. I’d been working as a substitute teacher and was loathe to cross the picket line.

Instead I drove onto the WB lot in my red VW convertible every day, feeling a little thrill as I passed by the iconic water tower and discreetly checked the passing golf carts for famous faces. The job was so unlike subbing around the San Fernando Valley, one unruly class of kids after another, never knowing where I’d be working until the call came in at 7am with that day’s assignment. When I got the call at all.

While the teaching job carried its own brand of stress, Silver’s office held another. There were no screaming kids but you couldn’t help being wary of what might set Joel off.  I made copies, answered phones, kept the office kitchen stocked and generally tried to steer clear of the heavyweight producer who had little patience for mistakes. A mistake was the grocery store being out of his beloved Yoohoo chocolate drink. I learned fairly quickly not to go back to the office without it.

The job had its perks though. Like going to the Die Hard premiere. It wasn’t quite the ritzy affair at the Chinese theatre in Hollywood I pictured. It was a casual event held at the long-gone Avco Theater on Wilshire in Westwood. It was a summer evening and if I’m not mistaken, I wore white jeans. We didn’t arrive in a limousine. We drove in Connie’s car and parked in the lot behind the movie house. There were no fancy schmancy valets in black tuxedos opening our car doors. We simply got out and hurried around the corner to the front entrance of the theater. Ah, there were the lights, the cameras, a red carpet leading up the outdoor stairs. As Connie and I made our way up we were assaulted with shouts of CONNIE! CONNIE! from the photographers covering the event. We looked at each other, dazzled by the flashing lights, confused until we realized that it was Bonnie Bedilia—the actress who played Bruce Willis’ wife—walking up the stairs ahead of us. ‘BONNIE! BONNIE!’ they shouted to get her attention. ‘BONNIE! OVER HERE!’

The rest is a blur and while Rickman was there, I didn’t see him. But then I wouldn’t have known him. I knew to look for Bruce Willis and for Alexander Godunov—we all knew the sexy ballet dance and Russian defector fromWitness and The Money Pit—but I’d never even heard of Alan Rickman. Die Hard was his first full length feature film. Then I saw him onscreen. And heard him. The sneer on his face and in his voice that signaled this was no ordinary actor. I thought he was incredibly sexy and attractive and was secretly annoyed he was the bad guy. I fell a little in love with him that day. I wanted him to be the hero. I’ve felt that way about Rickman a number of times over the years: can’t he play the hero this time, I’d think. But no. He was the Sheriff of Nottingham in Robin Hood, Snapes in the Potter movies, the stupid arse husband in Love Actually. To be fair he did turn hero from grumbling has-been in Galaxy Quest, truly one of my favorite of Alan Rickman’s roles.

I learned yesterday that Alan Rickman never won an Oscar, was never even nominated for one. Which tells you all you need to know about the value of awards, some arbitrary measure of excellence. That being said, you’d think I’d have seen Truly, Madly, Deeply. A role for which Rickman won the BAFTA and from the looks of the trailer, a movie that will have me falling in love with him all over again. At the end of the day—or a life—the awards won or lost don’t amount to much. We know what—and who—we love.