Above Ground on the London Underground—Day 19: Hammersmith Pub Crawl 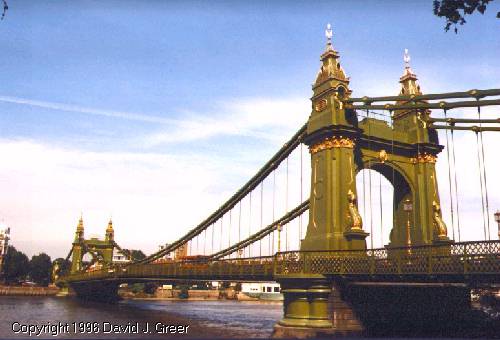 I’m taking a virtual walking tour ‘above ground’ on the London Underground. Using my Tube guide and my fitbit® device, my goal is to walk at least 10,000 steps a day roughly following along the Underground route, reporting back here on Fridays with my findings. Roughly following the Piccadilly Line. This is Day 19.

I’m feeling a bit blue to be leaving Chiswick where the Beatles shot scenes from HELP! at the City Barge and promo videos for Paperback Writer & Rain at Chiswick House back in the 1960’s. At the time, I was a half-crazy-in-love-with-Paul, pre-pubescent 12 year old tearing my hair out back in Canada. While I’ve grown up—and old— I’d still love to see Sir Paul upclose and personal (we could compare laugh lines). Not to worry, I’m counting on encountering my favorite Beatle another time on my virtual walk. Because anything can happen on a virtual walk. Like flying first class on Virgin Atlantic with Colin Firth & Daniel Craig for seat mates. McCartney still owns a house on Cavendish Street in St. John’s Woods which he picked up for 40,000 pounds back in the day. It’s A Long and Winding Road to get to your door, Paul—see what I did there?—which I’ll leave for Another Day.

Today, I’m not a stalker, I’m a Day Tripper following the Piccadilly Line to the Hammersmith stop. Join me? We could walk directly along the Great West Road but why take the busy route where there’s nothing to see but cars driving on the wrong side of the road? Let’s meander down to the Mall and stroll along the Thames. The scenic route includes a view of the Hammersmith Bridge, England’s first suspension bridge, which dates to the 18th century, along with a historic pub or two (or three or four). Indeed, I might just have to stop calling this a virtual walk and start calling it what it is, a ginormous pub crawl! 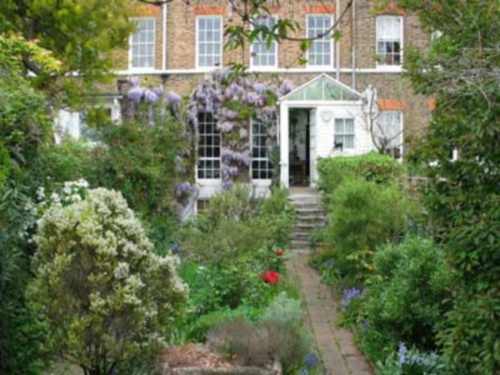 But wait, before you judge me, I do have a couple of cultural highlights planned for the walk. I do want to see Emery Walker’s house at #7 Hammersmith Terrace, billed as ‘the last arts & crafts interior’. The riverfront home of Emery Walker, printer and close associate of William Morris, a key figure in Britain’s arts and crafts movement, his home is now a museum featuring Walker’s own arts & crafts furnishings, Morris wallpaper, tableware and the like. I’d love to stop by. The pubs can wait. Really.

Alas, #7 Hammersmith is closed for renovations and won’t open to the public until 2017 which leaves me out this time round. Luckily there are lots of pictures online. Wouldn’t Benedict Cumberbatch’s Sherlock love the wallpaper shown below? It’s from the William Morris collection. 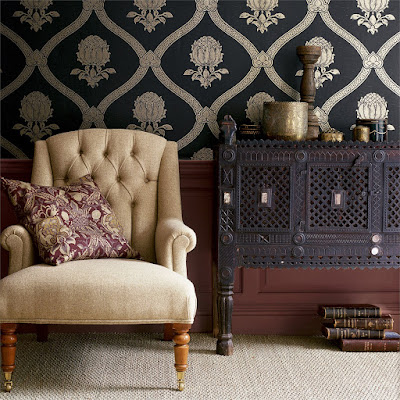 If it’s Thursday or Saturday (and we’re pretending it is) and between the hours of 2pm and 5pm, we can at least visit the basement of Morris’ home, Kelmscott House, where the William Morris Society is based. We can’t visit the actual upstairs part of the house, because someone else lives there and they don’t want us traipsing up their narrow stairs and rummaging through their underthings. Nice of them to let us browse around in the basement and coach house though. But only if it’s Thursday or Saturday, between the hours of two and five, of course.

Arts & crafts design out of the way, let’s have a closer look at the riverside pubs, in order of appearance. 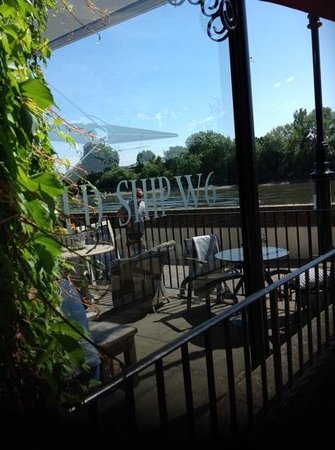 image credit: Trip Advisor
While the Old Ship W6 has been serving Londoners since 1722, somewhere along the line so many Londoners converted to true blue vegetarianism, that the pub boasts the ‘best Vegan menu in Hammersmith’. 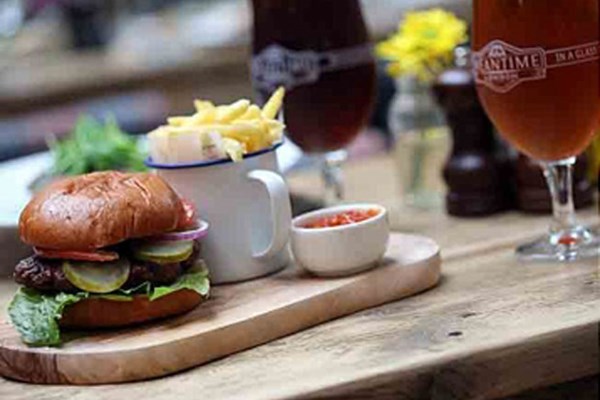 For those of us happily eating from the other side of the menu, we can dig into the bacon and onion pate with our bev of choice, or any number of yum yums including an Old Ship Beef Burger if we’re feeling homesick for an American classic. They serve it with ale onions, gherkin, American cheese, ketchonnaise and fries. I’d hold the pickles—er, gherkin—and the ketchonnaise cuz if I want ketchup and mayo on a burger (which I don’t) I’ll add it myself, ta very much. Unless the ketchonnaise is for the fries? Ew! Ditto. 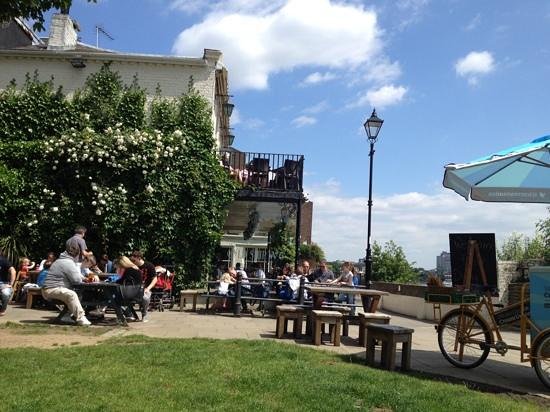 It’s a good thing we’re walking because I for one, don’t think I can resist their apple and spiced plum crumble with hot custard. The pub is deliciously located riverside with indoor and outdoor tables plus a green lawn where you can spread out and revel in the relaxation of watching boats, swans and pretty people walking by. If I ever want to get up, I might have to skip the Shandy altogether. Hah! Who am I kidding? 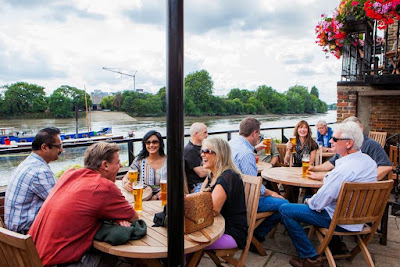 Let’s drink up and wobble along to The Dove. I have it from the highest authority that it’s a one minute walk, with less than 300 feet between the two. The Dove, like the Old Ship W6, is a venerable old public house which dates to the 17th century. What sets The Dove apart is its claim that Charles II often romanced his longtime mistress Nell Gwyn within its’ walls. The “It” couple also partied at the London Apprentice in Isleworth. 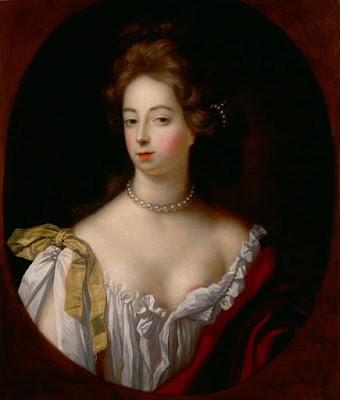 Nell Gwyn by Simon Verelst circa 1680
Via National Portrait Gallery

It seems to me that “pretty witty Nell” as Samuel Pepys called her, and one of the world’s first actresses—prior to that males played the female roles as anyone who has watched Shakespeare in Love knows—and her relationship with Charles aka ‘the merry monarch’ for the wantoness of his court would be a great subject for a film. There hasn’t been a movie based on their story since 1934 so I’d say it’s time for a redo. Alicia Vikander, Michael Fassbender, are you available?

Back to today’s Dove, I love the look of their Frontier Cod with chips served in a basket, and I’ll somehow make room for their Creme Brûlée with shortbread biscuits. Why do you need shortbread biscuits when you’ve got creme brûlée? Beats me, but I’m in. I’ll take my time, savor the fish ’n chips with a pint overlooking the river. You tell me, what’s good on tap?

Pay the tab, can you please, while I sign us up for their mailing list which buys us a free drink next time we’re in the hood. I’ll meet you down the way at ...

The Rutland has been closed but is re-opening today, February 26! It’s like they knew we were coming! To celebrate let’s lift a pint of their house brew, their very own 1730, a special pale ale. Good news, they’ve got a club too. Sign up for their email and you get £5 off your next meal!

Just one more to go. I’m stuffed to the gills but I can do it. The Blue Anchor is right next door. In fact the outdoor tables are so close it’s hard to tell the pub-goers from one place to the other. 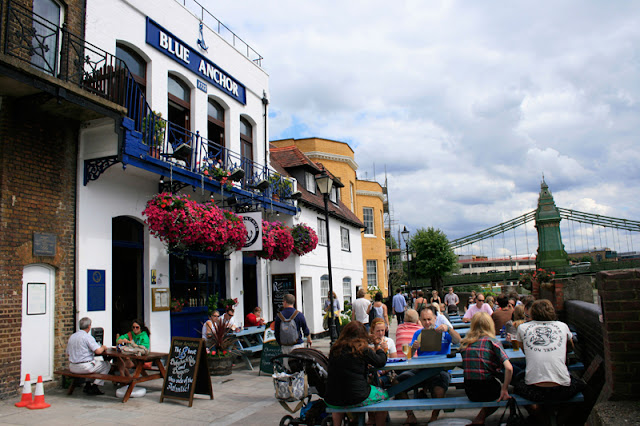 As you can see, both The Rutland and The Blue Anchor have tremendous views of the bridge. And baskets and baskets of flowers. The Blue Anchor got their license in 1722; on their site they note that while they were celebrating their 50th anniversary, the American Declaration of Independence had yet to be signed and the French Revolution was still 20 years in the future!

Would you like to split the intriguing sounding Honey Roast Warm Pumpkin salad, a combination of caramelized pear, roasted leek, beetroot and spinach gnocchi, chick peas & mozzarella cheese? Because with ingredients like ‘caramelized’ ‘gnocchi’ and ‘mozzarella’ I can’t resist.

How can I eat everything I’ve stuffed down my gullet you ask? That’s another benefit of a virtual walk and all the virtual food and drink along the way. Not only are they calorie-free, they really go down easy.

I’m only sorry we’ll be missing the annual Oxford-Cambridge Boat Race scheduled for Sunday, March 27th because all these riverside pubs offer spectacular views. Proceeds benefit cancer research. Hey, I’ll still be in London, I can always come back. And I’ve got that free drink at the The Dove to cash in on, plus £5 off at The Rutland. Care to join me?

Ooof. That’s my virtual walk wrapped for the day. I know it’s only 2 miles, about 2 miles short of my daily goal but I can’t walk another step. I may not be blind-drunk but I am blind from peering at my computer screen. Time for me to sleep it off!

Your turn. Which of these pubs would you like to visit in real time for a pint? If you’ve had the pleasure, please share your story with the rest of us virtual drinkers. Cheers!