The Art of Jeremy Lipking #ThrowbackThursday

It was just shy of ten years ago that I was doing a regular freelance writing gig for 805 Living magazine. A glossy regional, the magazine’s editor, Lynn Andujar kept me busy every month but our April 2006 edition had me whirling. I tracked down seven artsy types, local to our suburban hood, for our Arts Appreciation piece, and while a few of the subjects have stayed with me, none so much as the gifted painter Jeremy Lipking.

Already well-known for his figurative realist paintings, Lipking was fetching thousands for his art, but I was clueless. And enthralled. I’d never seen anything like it. Paintings that were at once both almost photographic in their exactness, yet lush and ethereal. I met him at the Calabasas home he shared with his wife and daughter, frequent muses for his work. The house with its immaculate white walls and rich, dark wooden floors, orderly, nothing out of place, was utterly unlike the artist’s atelier of my imagination; the property was what my inner realtor would call turnkey ready. At the time a converted bedroom doubled as a studio. The calmness, the serenity, may be in part what enables him to create such rich and peaceful work. 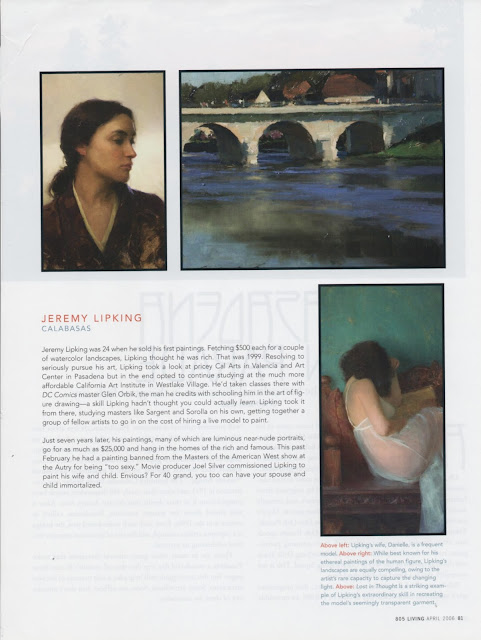 Soft spoken, unpretentious, he hadn’t gone to an acclaimed art school, dismissing them as too pricey. Instead, he’d taken some classes from a pokey little art school in Westlake where he'd learned figurative drawing from DC Comic’s master Glenn Orbik. Later he made a private study of Joaquin Sorolla and John Singer Sargent. He didn’t need to puff himself up, his work, breathtaking and beautiful blew me away.

I didn’t need to say much in my piece for 805, even I, with my love of words, could see his pictures were indeed worth a thousand of them. 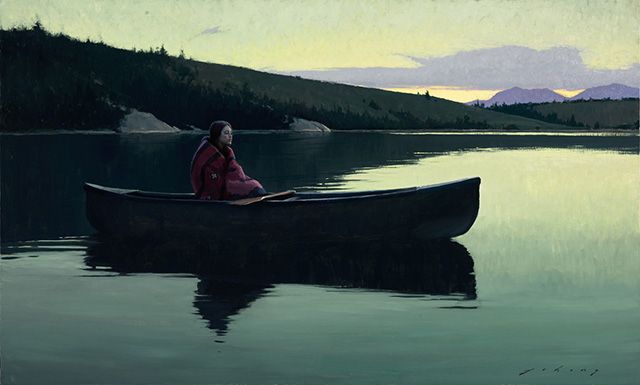 "The inspiration for this painting came on a cool early morning on the lake with my daughter. When I noticed her canoe emerging from the large silhouette of the mountain reflecting on the still water, I immediately decided I had to make a painting of it.” Jeremy Liking

Ten years later he is no less famous in the art world. His pieces—two of which are currently on view and for sale until March 20th at the Autry Museum ‘Masters of the American West Show’ here in L.A.—fetch in the $40,000—$50,000 neighborhood. Doing a quick scan of his twitter feed, he still seems characteristically low key.

So that’s my pitch. I don’t know the man at all but I do love his work! And recognize his genius as a master of realism. Check him out at the Autry if you’re a Los Angeleno or visit his website at Lipking.com  You’ll find him on twitter at @lipking—his profile simply says “I’m a painter.” And natch he’s on Instagram.