You make the earth move under my feet 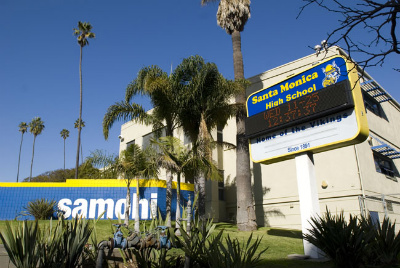 My friend Mindy is in L.A. for a week, staying at Le Méridien Delfina in Santa Monica. “I think my hotel is across the street from your old high school” she tells me, and we agree to meet there for a drink.

Checking the address online, I see it’s on Pico, across the street from Santa Monica High’s main entry, but I can’t picture it. All I can see is a 45 year old snapshot in my head of the dingy apartment building that used to be there and where I’d smoked a joint with a guy named Hank. It was one of the precisely two times I’d tried marijuana in high school. Afterward, he’d taken me flying down PCH on the back of his motorcycle. The idea terrifies the old lady in me now, but to be honest, I think I was scared to death even then. Still, Hank walked around school in a military-style jacket that flared in gently at the waist, dark navy, gold braiding at the collar and epaulettes, its brassy buttons flashing in the sun, the way rock stars did when the sixties turned into the seventies. And aviators—God, knows I loved a guy in aviators—with honey brown hair that swooped down over his eyes, blue, when he took those shades off. What’s a 17 year girl to do?

We had one real date, miniature golfing, but after a year of obsession and crushing on him from afar, watching from the safety of the history building steps as he played the Jimi Hendrix’ version of Star-Spangled Banner with his band in the quad, my heart coming to a standstill when we passed in the halls, quaking at the sight of him, my own private rock star, we failed to connect. I was shy, unable to break through my own shell. Perhaps, behind the shades, under the jacket, beyond the music, he was as well.

I think about him now after Mindy and I hug hello on the steps of Le Meridien, the giant Samohi sign just up the street.

“That’s where my dad dropped my friend Laura and me off the morning the Sylmar earthquake hit in ’71.”

Centered in Sylmar, registering 6.5 on the Richter scale, the quake woke up families all over Southern California at six am that February morning. My parents had screamed stand in the doorway, stand in the doorway from down the hall of our third floor apartment. My sister and I held onto each other while we braced ourselves in the doorframe of our bedroom, my brother, at six foot two almost filled his own. After the rolling stopped we’d all been giddy with relief and my father insisted on driving me to school, like it was just another day.

“He dropped us off right there” I tell Mindy, pointing to where the Samohi sign towered over the school's main entrance. Behind the sign I can see the history building where Laura and I were sure we saw a crack. “And we walked right across campus and out the back way.”

We’d skipped school, gone to Laura’s apartment to drink tea and eat toast with honey and talk about boys. Like it was any other day, Hank and his friends, Squishy Face and Pumpkin Head, were the main topic of conversation.

Later, after we enjoy the complimentary glass of champagne her swanky hotel bestows on us at check-in, Mindy and I decide to walk down Pico Boulevard to Main Street, looking for a late night bite to eat. The beach is close but invisible in the dark.

“In P.E. we used to have to run down Pico to the ocean and along the shore to the pier and back.” A sea of girls in white blouses and blue gym shorts, long straight hair rippling as we ran. “Oh, and I think I smoked a joint with a guy somewhere near here.”

I don’t tell her how he rocked my world. And we laugh, shaking our heads at the high school girls we used to be.