Above Ground on the London Underground—Day 38: The British Museum and Bloomsbury 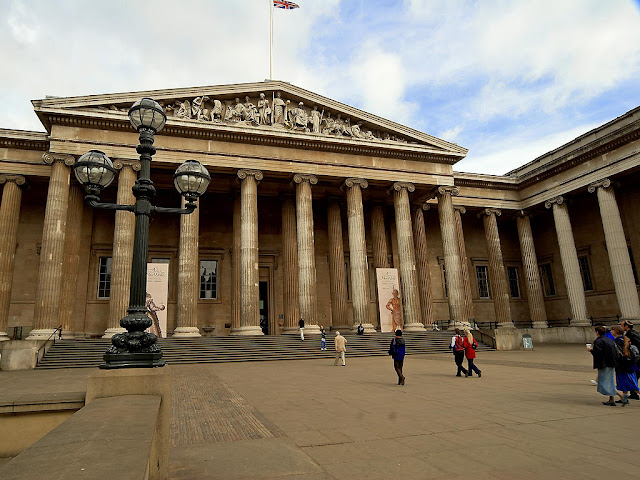 If it's Friday we must be back in London. Every Friday I take a virtual walking tour ‘above ground’ on the London Underground. Using my Tube guide & my fitbit® device, my goal is to walk 10,000 steps a day roughly following along the Underground route, reporting back here on Fridays with my findings. Here are the previous days. Piccadilly Line, Day 38.

We spent last week exploring the Covent Garden area, this week we'll hit the British Museum, trying to reserve some energy to explore Bloomsbury, the area made famous for being the meeting place of the Bloomsbury group, an informal gathering of artists, writers and intellectuals including Virginia Woolf and her sister Vanessa Bell. 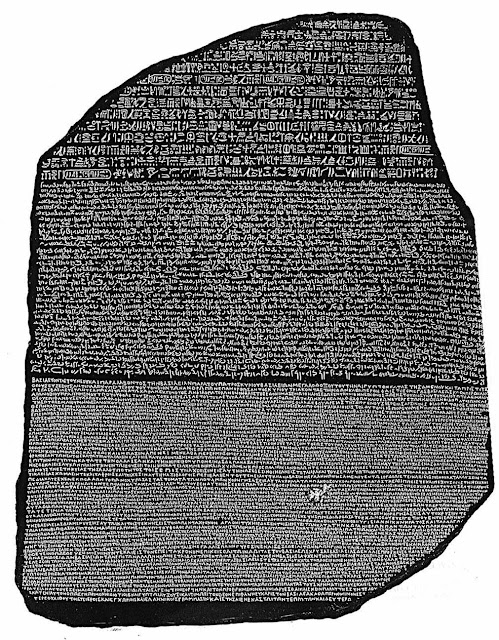 Big day ahead so let's get started. It's just a half mile to the British Museum, most famously home to the Rosetta Stone, which dates to 196 BC. The face of the large rock—3′ 9″ x 2′ 4″ x  11″—is inscribed with a decree affirming the royal cult of King Ptolemy V on the anniversary of the the 13 year old boy king's coronation. The decree is issued three different ways: Egyptian hieroglyphs fitting the formality of a priestly decree, demotic script which was often used for daily purposes, and ancient greek, the language used by the administration. I'd love to run my fingers over the surface of the stone but I'm pretty sure a very polite museum guard would say "Pardon me, madam, but please there is no touching the stones."

While use of hieroglyphs faded after the fourth century, and with that, the ancient world's understanding of them, when the stone was discovered in 1799 by soldiers in Napoleon's army, it was the Greek letters that enabled scholars to ultimately decipher the hieroglyphs. The stone, considered the key to understanding Ancient Egyptian civilization and literature, was taken by the British when Napoleon was defeated and has resided at the British Museum since 1802—except for two years during World War I when the Rosetta Stone was stored 50 feet underground at the Holborn Station. 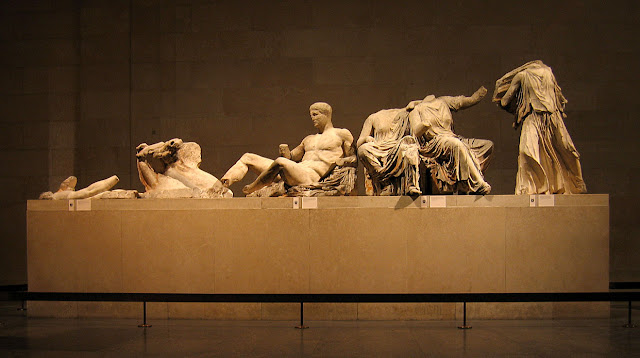 The British Museum is also home to the Elgin Marbles, a collection of marble statuary, sculpture, and architectural pieces known as the Parthenon Marbles as well. The ancient pieces of art were created from 447 to 438BC at the Acropolis in Greece. From 1801 to 1812 the British Earl of Elgin started stripping the marbles from the Parthenon and shipping the sculpture home to England. 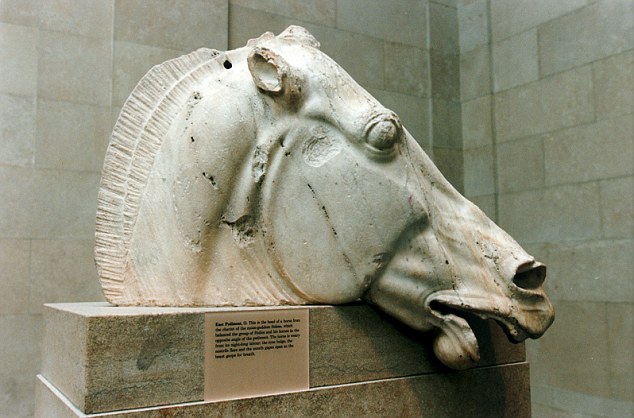 Lord Byron (swoon) called the action what it was—looting—but the marbles have been in residence in the British Museum ever since anyway. Not that they'll stay there if Greece has its way. Greece wants its marbles back and just last year enlisted Amal Clooney (Yes, that Clooney) to sue the UK to return them. As of this writing, that's a no go.

If you want to spend a little more time exploring ancient history check out the museum's Plan Your Visit tab, and explore the sights listed under 3 Hours at the Museum. Me? It's a beautiful summer day outside, I'm moving on! Leaving the museum, I find Montague Street which takes me past Russell Square where you can't miss the Hotel Russell. By the same architect who designed the Titanic, Charles Fitzroy Doll, the 4 star hotel is clad is a light terracotta called thé au lait (tea with milk). The hotel's restaurant is said to be an exact match for the Titanic's dining room. I was thinking of stopping in for thé but just my luck I can't even run in for a quick peek. The hotel closed on July 15th for a major remodeling job and won't reopen until 2017. I hope you'll still be able to see the striking exterior as you pass. 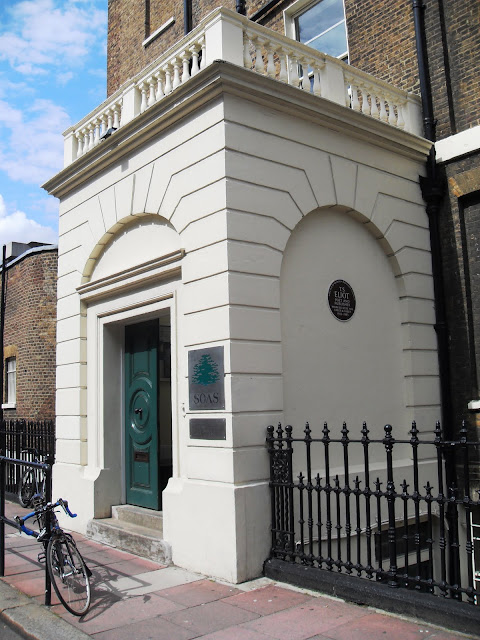 “This is the way the world ends,

not with a bang, but a whimper. 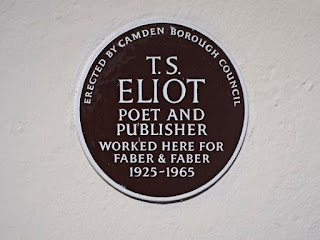 I love London's recognition of its men & women of letters: besides the plaque, there's a tree dedicated to Eliot in the park. 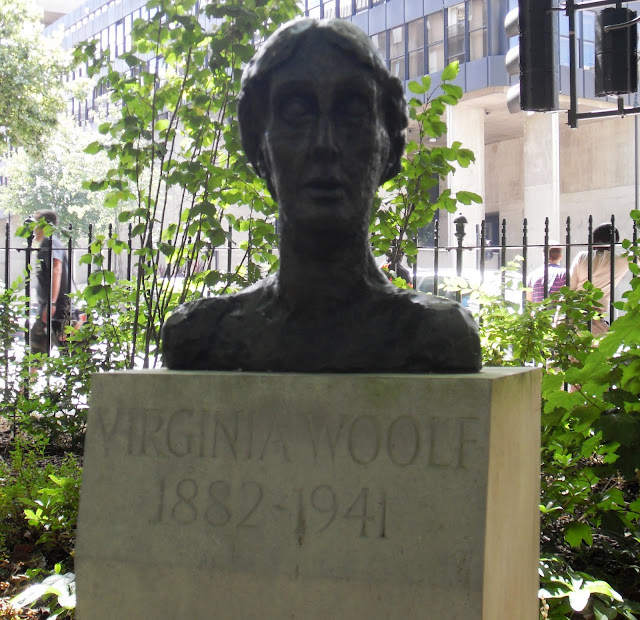 From Russell Square I continue walking to Tavistock Square where Virginia Woolf and her husband Leonard lived at 52 Tavistock, now gone. What remains is a bust of Woolf in the park. Tavistock is a place where Woolf was happy, and was inspired to write To the Lighthouse. She enjoyed living in the hubbub of the city, in the midst of the action and made a habit of people watching; she can do that easily from her perch now. 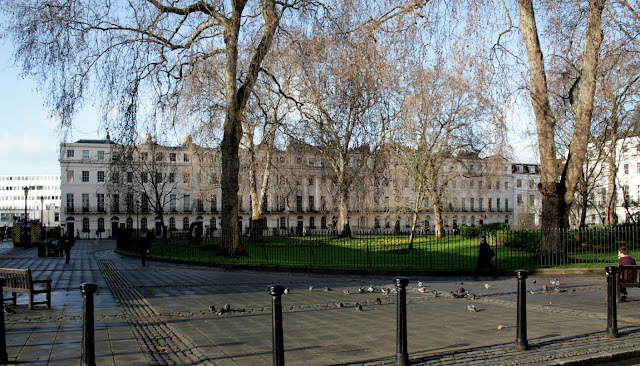 Close by is Gordon Square where many members of the Bloomsbury group had homes.Virginia Woolf and her siblings, including her sister Vanessa Bell, lived at 46 Gordon Street when they were children. The house is where the whole Bloomsbury group got its unofficial start. Later the noted economist John Maynard Keynes moved into the same house, living there until 1946. Look for the blue plaque marking the spot. The house now houses a school of arts under the University of London auspices. 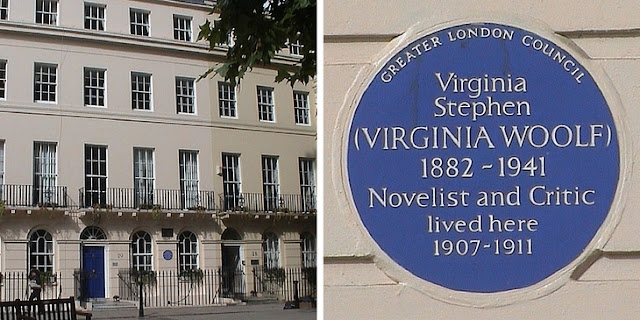 You'll find lots of blue plaques down the way at Fitzroy Square including one at No. 29 where Virginia Woolf lived from 1907 to 1911. It was also the home of George Bernard Shaw from 1887 until 1898. The painter James McNeill Whistler lived at #8 and Guy Ritchie owns 34-35. From what I can see they all look alike but that should be worth a look anyway. 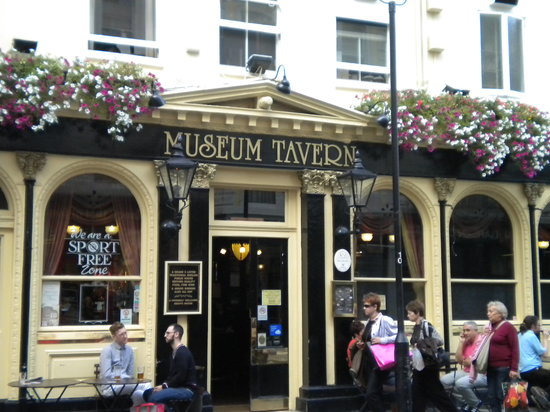 After tromping through the museum, and around the squares peering at numbers, I'm shattered and ready for a square meal. Time to double back and hit the Museum Tavern right on Russell Road across from the museum. The current pub dates to 1855—hardly old by British standards—but sits in the footprint of an older pub. The Museum Tavern features carved wooden fittings, etched and cut glass outer windows and some colored leaded-glass detail.

I'm going to have a real brew and what they call "the nation's favourite pub dish "the Ultimate Fish & Chips: “Chunky, hand-battered cod fillet, served with the traditional British accompaniments of chips, your choice of mushy or garden peas, Haywards™ pickled onions, bread & butter, curry sauce and tartare’’

Ah, that's better. Now all this talk has put me in mind to read something by Virginia Woolf. It's been years since I read A Room of One's Own. Or should I read Mrs. Dalloway or her book of essays? I'm off to find a bookstore where I can do a little browsing. Come back next week and see if I had a little bit of blooming luck.

It's British Isles Friday when I link up with Joy Weese
Moll for #BriFri. Check it out.