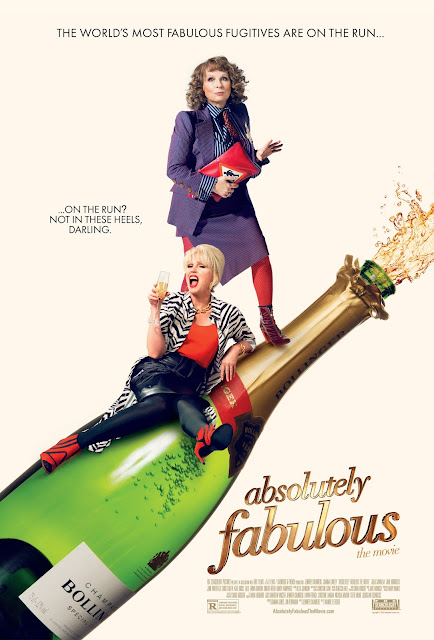 Taking a mini-break from my usual Friday walk in London for British Isles Friday with a little something different. I wanted to tell you about the invitation I received to a screening of Absolutely Fabulous; The Movie on Monday here in L.A.

The film was inspired by the Ab Fab television series which is about as British as  you can get anyway. I used to watch religiously, and I confess seeing the girls back in action in the trailer made me laugh. Edina (Jennifer Saunders) and Patsy (Joanna Lumley) have aged, but so have I, making the whole situation even more hilarious. Add in Julia Sawalha back as Patsy's daughter and a slew of celeb cameos—Jon Hamm, Kate Moss, Stella McCartney etc.

My sister—who makes me laugh anyway—is joining me for the screening. There's something about these two ridiculous women with their concerns about their looks and denial about their aging that makes us laugh at ourselves, plus we've been promised champagne, so how could I refuse?

I'll be back here and on Chapter1-Take1.com early next week with my take on the film. Absolutely Fabulous: The Movie opens July 22. Jennifer Saunders wrote the script and Mandie Fletcher directed it so it's a double plus. I get to —I need to—laugh and support women in film.

Here's the lowdown on the story


Edina and Patsy are still oozing glitz and glamour, living the high life they are accustomed to; shopping, drinking and clubbing their way around London's trendiest hotspots. Blamed for a major incident at an uber fashionable launch party, they become entangled in a media storm and are relentlessly pursued by the paparazzi. Fleeing penniless to the glamorous playground of the super-rich, the French Riviera, they hatch a plan to make their escape permanent and live the high life forever more!

It's looks like a whole lot of silly and ridiculous fun to me!