Another brush with stardom .... Rachel York studied with my acting teacher in the 1980's 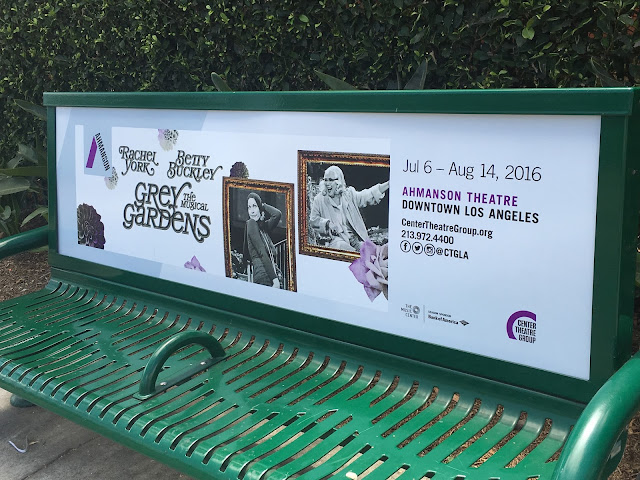 She was a blonde back then, and young, very young. Now here she is, thirty years later, her picture on a bus bench, advertising her appearance in the Los Angeles run of a Broadway play.

"I went to acting class with her" I tell my husband as we wander down Third Street, thinking about where to get lunch.

"The other one. Rachel York. I remember the day she came to class. 18, 19. Really pretty girl. Aaron told her she needed to go to New York"

Aaron is Aaron Speiser, my acting teacher for a couple of years in the mid-80's.

These days Will Smith graces Speiser's website, Virginia Madsen credits him with turning her career around, while Jennifer Lopez, Gerard Butler, Marion Cotillard and many others have turned to Aaron for coaching.

But back in those 1980's days, Speiser held class in a small black box of a theater, under 50 seats in total, on a ratty corner of Santa Monica Blvd. General Hospital's Jack Wagner was his major claim to fame. I told him I hadn't acted except for one class back in college but at thirty-something, I thought it might be fun. He assured me that even if I didn't pursue the business of acting, many adults took acting classes which proved beneficial in all areas of their lives. Did I secretly harbor some belief that my star power would be discovered? Maybe.

The class was for beginners, a dozen or so of us learning the basics.

In our first class Aaron asked half of us to stand on the stage, the balance of the students remained in their seats, watching. For two full minutes we stood and fidgeted, wrung our hands, bit our lips, coughed self-consciously, and felt nothing but awkward as our classmates snickered from their seats. Not until Aaron had us count the tiles in the ceiling above us did any of us feel at ease. Comfortable, at home in our skins. Ah, the first discovery. Even if the script doesn't spell it out, an actor has to give himself something to do. A little piece of business. The actor sitting at a desk, drumming his or her pencil. Putting on a sweater. Looking through the mail. Telly Savalas sucking on a lollipop.

We learned how to use sense memory—to remember so precisely what it feels like when the cold of a winter's day slips its icy fingers up under your jacket that your response is nothing but an authentic shiver. You look cold because you are cold. As Descartes might say: you think, therefore you are.

To work on our powers of concentration—on a Hollywood set you have to be able to ignore the script supervisor standing next to the camera and the boom guy standing 3 feet away with his huge mic threatening to fall on your head—we stood facing each trying to add 7+7+7+7, not stopping until Aaron told us to stop, while the student opposite assailed us with loud chatter, intent on distracting us.

We learned how surrounding ourselves with props and finding the right wardrobe could help us create a character. The secret every bride knows: just putting on that frothy white dress can make you feel like a fairy princess. That a queen walks differently than a snack bar waitress.


For me, it was a blast. All fun and games, the nights filled with laughter. I was in a stultifying relationship at the time and acting class helped me release all the emotion I kept stuffed inside.

I ended up moving on from that beginning class, as Aaron moved from one small theater to another in Hollywood, I moved with him, from Beginning Acting Technique to Scene Study 1, from Scene Study 1 to Scene Study 2. Unlike tennis and surfing, bowling and beach volleyball, acting was something I wasn't half-bad at.

Disappearing inside a character was liberating. I didn't have to be responsible, good little Simone, I could let it all hang out and be the prostitute in The Owl and the Pussycat. I could be the manipulative, controlling older woman, the British madam in Edward Albee's Everything in the Garden bossing the beautiful young woman around. I didn't have to be nice. How satisfying it was to click that 1960's period pocketbook shut, my nose flaring in disdain.

Sometime along the line, Rachel York showed up. Young, blonde and beautiful in that stage ingenue way. Perfect features. Polished. Poised. She wasn't there long, one or two scenes maybe, and she was gone. She could sing, and Aaron told her she belonged in New York, not LA. LA wasn't the kind of place that cared about actors who could sing and dance. LA cared about actors who could sell toothpaste.

Somewhere along the line, I got head shots taken and went out on auditions.  The fun of acting disappeared like the rabbit in a magician's trick. Standing on small community theater stages, a line of other women waiting to go on, squinting out into the audience where a row of four people looked you over. Delivering your lines hopefully, hearing Thank You—which means no thank you—echoing in the small hall. I was a mess, unable to control my nerves. It didn't take long for me to realize the business of acting wasn't for me. What I loved about acting was the process, the building of the character, the crackle of rehearsal when you worked with your partner like you were choreographing a dance together. What happens when I do this? What happens when you do that? I loved the classes, Aaron's passion for the craft, the friends I made there, but it was time to move on.

As for Rachel York, she took Aaron's advice and went to New York. She was cast as Mallory in the Broadway production of City of Angels and she wasn't even twenty years old. She's been working on Broadway and in television ever since. Les Miz, Kiss Me Kate, Anything Goes, and now Grey Gardens at the Ahmanson. Her Wikipedia page describes her as an American actress whose acting coach Aaron Speiser encouraged her to go to New York. She may not be a movie star but still, she is a very successful working actress. Those are few and far between. Of all the men and women who flock to Los Angeles to become actors, most of them end up like the dreamers in the old Dionne Warwick song, 'parking cars and pumping gas'. Of all the dozens of fellow students I met at Aaron Speiser's Acting Studio over the years, only Rachel York achieved unqualified success, most of the others ended up like me. Doing something else for a living.

As a failed actress, a 'never-was', I can honestly say I'm fine with that. The only question I have is whether the tenuous connection I have to Rachel York—like a lot of other people, we both studied with Aaron Speiser years ago—entitles me to a couple of free tickets. That is the question.


If you liked this post please forward it to a friend or share it on social media. Thanks!
#ThrowbackThursday Brushes with Stardom memoir