Above Ground on the London Underground—Day 2: I’ve gotta get out of this place. 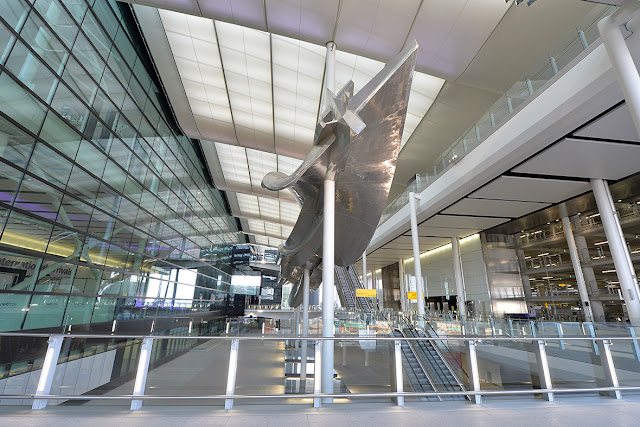 I’m taking a virtual walking tour ‘above ground’ on the London Underground. Using my Tube guide and my fitbit® device, my goal is to walk at least 10,000 steps a day roughly along the Underground route, and report back here on Fridays with my findings. We're currently on the Piccadilly Line. This is Day Two:

Having bid my fantasy flight-mates Daniel Craig and Colin Firth a cheerful cheerio, I immediately go into semi-panic mode. Ok. What do I do now?! Here I am, my fitbit® clipped to my belt, ready to start my virtual walking tour of London but I’m feeling so thrown by all the steel and glass of the completely renovated Terminal 2 at London’s Heathrow Airport, also know as the Queen’s Terminal, that I don’t know  where to turn or what to do. Should I curtsy? 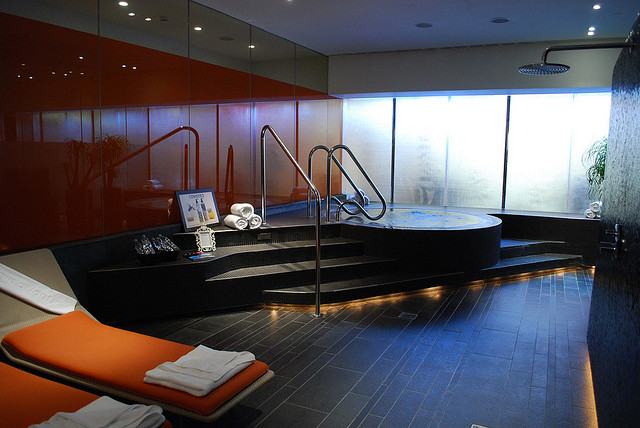 So I do the sensible thing and head back to the Virgin Atlantic Clubhouse for a little spa time. Because well, look at it. How could I not?

Okay. All pampered up (I’m from L.A. where we know the meaning of the word ‘pamper’) and ready to face the airport again. To be honest, I haven’t been to Heathrow since before they ditched the pound for the Euro back in the 80’s —I know, what a total rube—and this new fan-dangled terminal with its gleaming, ultra-modern glass and steel construct is still daunting. But what was I expecting? Anne Hathaway’s cottage, thatched roof and all? 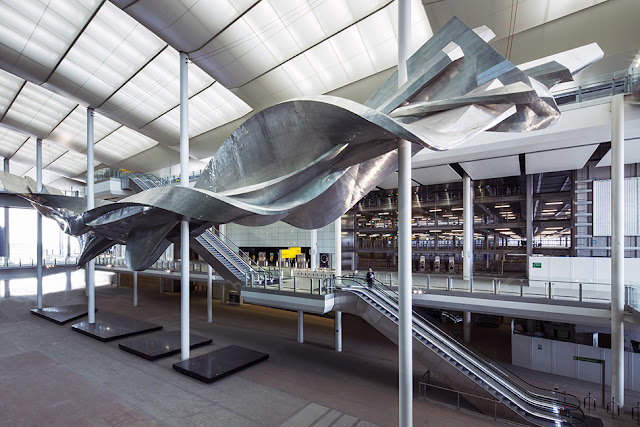 For all its modernity, from the Virgin Atlantic clubhouse to Richard Wilson’s Slipstream sculpture, Heathrow’s terminal two is still an airport. Slipstream, a giant melding of aluminum metalwork is 230 feet long, weighs almost 80 tons and cost over £2.5 million. It’s a metaphor for flight but I can’t stop thinking about that humungous hunk of heavy metal clattering down from the sky. Here in LA we have a giant 340 ton rock which artist Michael Heizer transported from the desert via freeways and city streets to take up residence on the grounds of our LACMA museum. The boulder is called Levitated Mass and it hangs suspended over a specially built walkway. Some people love to walk under it, tempting fate here in earthquake country, others watch from a distance, taking pictures. Total cost $10 million. Here at Heathrow, Slipstream is designed to give those of us passing by the feel of velocity. It is also, according to the artist, supposed to stop us in our tracks and make us say “oh shit!”  At another time I might say “oh shit!” coo “cool”  and laugh but today, the whole place feels cold, and I don’t think it’s just the season.  Miss Marple, can I borrow a cardie and a map? I’ve gotta get out of this place. 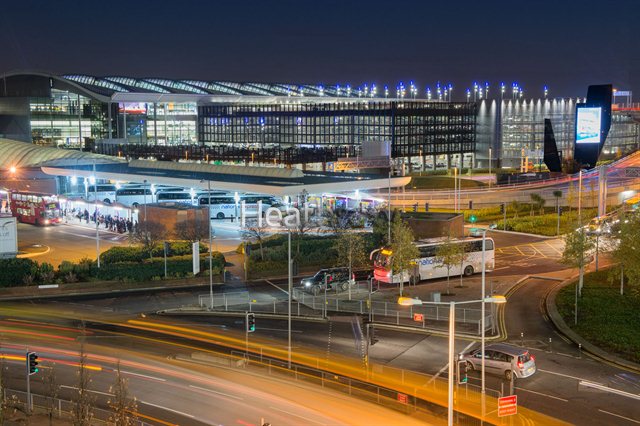 Easier said, as they say, than done. Did you ever notice how airports aren’t exactly designed with pedestrians in mind? It’s fine if you just want to cross the road to the parking lot (hereafter known as car park) but if you want to exit the airport on foot, your Beara Beara pack slung over your shoulder? Good luck! That’s a mystery you need an old-fashioned British detective for. Don’t bother to wake Sherlock, Dr. Watson could tell you there simply aren’t any secret passages to help you walk out of here. The sidewalks are non-existent, illusions, like my flight mates Daniel Craig and Colin Firth. Hallucinations, worthy of the great detective. 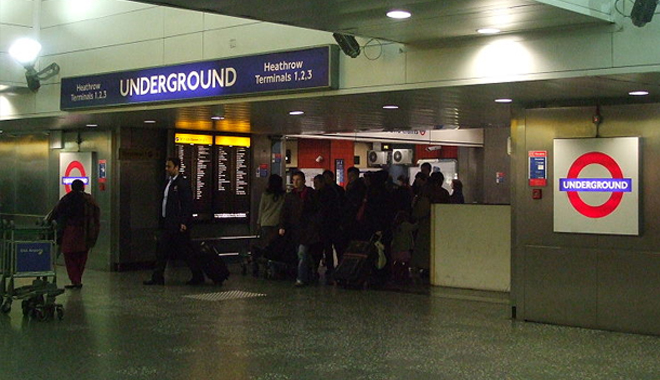 I’ll need to hop a bus, take a taxi or travel by tube with the hoi polloi to escape the confines of Heathrow. As Terminal 2 houses a London Underground station, I catch the Picadilly Line to a stop where I can start my walk. Not that I haven’t already put in my 10,000 steps a day just wandering around the airport, mind you!

I don’t need money because, once again, this isn’t a real trip, but if I did, I’d need £1.70 for the fare, if I’ve computed zone charges, off-peak fares and congestion fees correctly, that is. Congestion fees? Huh? The tube is a bit congested right now actually, with everyone’s suitcases on rollers, sliding all over the place. The myriad of British accents and foreign languages swirling about go right to my head, like I’ve drunk too much wine, and I’m glad I’m getting off at the first stop: Hatton Cross, just a 3 minute ride. Note to self: If you can afford the Upper Class fare on Virgin Atlantic, you can afford to spring for a taxi. 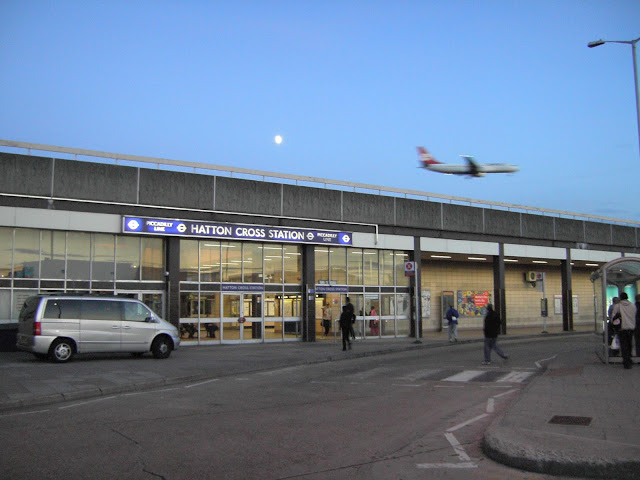 As you can see, I’m still awfully close to the airport so I’m happy to keep on truckin’. I could just walk along the Great West Road to the Hounslow West station—it’s a mere 4200 steps—but I’ve got a sneaking suspicion that the “Great” is slightly hyperbolic. 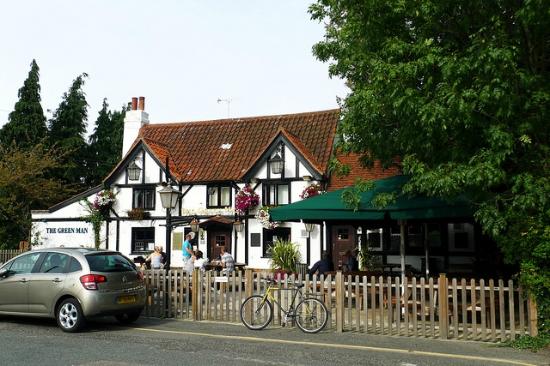 Instead, I’m going to add some steps and take a detour down Fagg’s Road to Green Man Lane (there’s a very un-PC joke there) where’s I can get some grub at a 17th century pub called the Green Man. The pub is located just off the main road once traversed by stagecoaches traveling west from London. These days it lies directly under the flight path so it’s a popular place for plane spotters sit at the outside tables. Which is why I sit inside where the pub boasts thick walls, open fireplaces and low beams.

“Hello there. Know what you want, then?”

“Hi. Yes I do. Could I have a plowman’s lunch please?”

I particularly remember my uncle ordering two plowman lunches when he took me to a London pub back in the 70’s. A hunk of bread, a slab of cheese and a pint of ale would go down really well right about now.

“You from the states? Here, let me get you a menu. We do a great burger with chips. Fries as you call ‘em.”

“Oh! I was hoping for a plowman’s lunch!”

“Sorry love” I could swear I saw a trace of a snicker cross the waiter’s face. “How about some nachos?”

“Er... ” I dearly wanted something British-y.

“The Welsh Rarebit is quite good.”

“That’s what some folks call it.”

I think of the fox and hounds and hunters chasing over the nearby grassy fields, all the poor little rabbits dashing for shelter in their bunny holes.

“No thanks. No offense but I just couldn’t bring myself to eat a rabbit.”

This time the waiter doesn’t even bother to try to swallow his laugh.

“Why is it called Welsh rabbit then?”

“Why? Because melted cheese on bread is all the Welsh could manage. So they say, anyway. It’s like a Welsh comb.”

“It’s your hand. It’s when you’re so poor all you can do to tidy your hair is to run your fingers through it.”

“I’ll have the Welsh rarebit, um, rabbit then.” I don’t think Beatrix Potter would mind.

The Green Man doesn’t have a plowman’s lunch but it does have wi-fi so I nail down my next steps, pay my bill—just under £10—and head over the Causeway and back up to the Great West Road, where eventually I run into this Hounslow hotel. 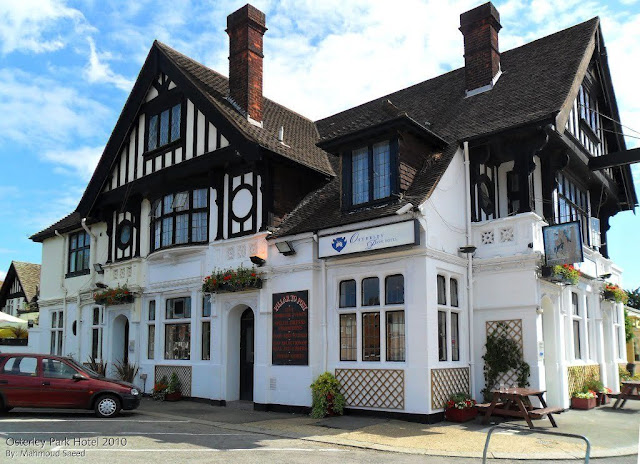 The faux Tudor style hotel’s website says they’re located just six miles from Heathrow which sounds about right. I check my fitbit® and see I’ve walked a total of 5 miles from the Hatton Cross station, including my detour down to the pub. Might as well stay put here in Hounslow and have a look around the town.

My next trek will take me to the Osterley Park & House. Just looking at the exterior of one of the last remaining estates in London, now a national trust, I can see I’m going to need my walking legs. Join me here next week? 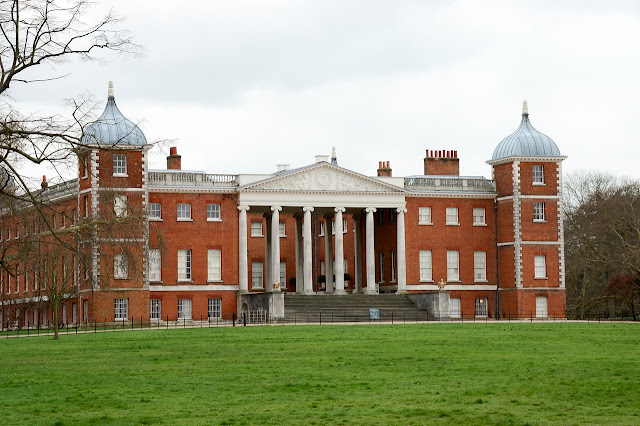 How’d I get here?