That Thing You Do: Making Movie Magic [memoir] 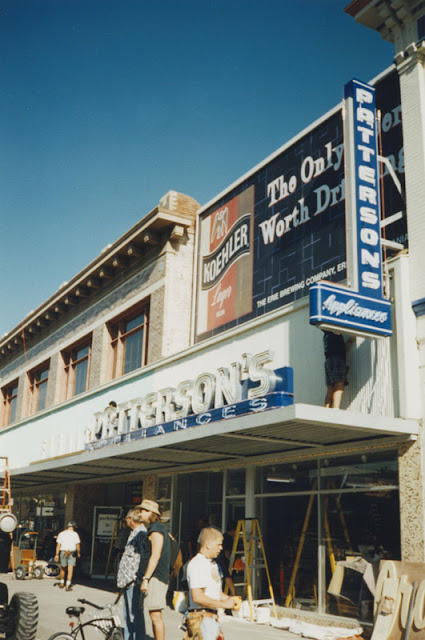 It was less than 50 miles from our place in Mar Vista to the filming location for That Thing You Do in Orange but with morning traffic, fifty miles could take all day. Our call was at some absurd hour like 6:30 am, my husband’s crew call was even earlier, so we decided to go down the night before, stay in a budget motel, be there bright and early without fighting the Los Angeles freeways.

When you work around film and tv sets all the time, like I did when I was working as a production coordinator, the initial thrill is replaced by low humming tedium, the daily grind of hurry up and wait. But I’d left the industry when I got pregnant, now, three years later, visiting the sets of movies my husband was working on, was back to being nerve-bitingly thrilling. Actually being in the movie, albeit as an extra, even more so. The fact that it was Tom Hank’s directorial debut made it an even headier experience.
After a gourmet dining experience befitting our Hollywood lifestyles—we ate at Denny’s—we tried to settle into some semblance of our nightly routine. Mark made some calls while I gave Russell a bath and read him the usual dozen or so stories, and then sang him to sleep with my limited lullaby medley. My repertoire ran from Moon River to Walking in a Winter Wonderland—no matter the season—to Hush, Little Baby, my take on the mockingbird song.

I can’t sing. All my life I’ve had people wincing when I sang along with the radio. In elementary school one teacher told me to ‘just pretend you’re singing ’ for our classroom’s holiday choral performance, and even my husband used to routinely correct me, singing the song himself so I could hear how it was supposed to sound, before he finally gave up, realizing it was hopeless. I couldn’t carry a tune in a bucket and that was that. My little boy never winced. He looked at me and asked for more, like I had the voice of an angel. Sometimes I think when I sang to him, as soft and low as I could manage, to soothe him to sleep, that maybe I did have the voice of an angel.

Getting to sleep myself wasn’t so easy. Like all the extras, the so-called ‘background actors,’ I’d been instructed to arrive on set with my hair in curlers. Curlers. I didn’t own curlers. I’d had to borrow some from my mum. I wore my thin blonde hair straight letting it hang shoulder length, lank and limpy. If I thought about my hair— which I seldom did, so happy was I at being a first time mother at close to forty—I pulled it back in a pony tail. But That Thing You Do was a period film, set in 1964, when women still went to the beauty shop every week to have their hair set. Bouffant up-do’s, flips, curls galore. I lay with my head on my pillow, the curlers, scratchy and rigid, digging into scalp, and couldn’t sleep. I wasn’t just uncomfortable, although I was plenty that, I felt like a kid trying to sleep on Christmas eve, waiting to see what Santa would bring. I’d always had a secret belief that if I could get the real Hollywood hair & makeup treatment, I could be beautiful too. I knew actresses routinely spent over an hour in the hair & makeup trailer being brushed and teased to perfection. All I needed was a wig here, a fall there, a heavy base to eliminate freckles and flaws, contouring colors to create bone structure, lip liners to make lips where I had none, false eyelashes to make my eyes pop. I couldn’t wait to see the new me.

I stared at the motel ceiling, the cottage cheese effect a cheap outdated mask for poor quality construction, and thought of Ann Margaret and Brigitte Bardot. I’d even settle for Sandra Dee. I finally fell asleep thinking just a little movie magic and I wouldn't just sing like an angel, I could look like an angel too.
••••••••••••••••
That Thing You Do
We’re Ready for Our Close-up, Mr. Hanks.