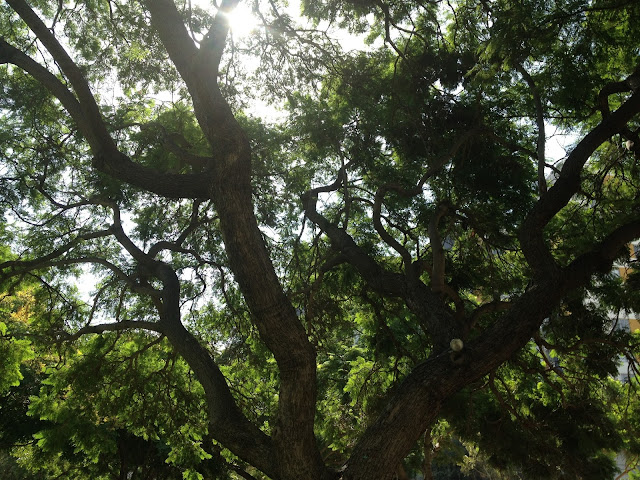 Usually our little park is filled with elderly types sitting on benches under the canopy of trees while middle aged men and women like me walk the gravel pathway that circles the fountain and the lawn like it’s some sort of athletic track. Trainers routinely take up their patch of grass, calling out corrections to small groups of three and four working out on yoga mats in the morning dew.
“Come on ladies! Get those asses down.” I scowl behind my sunglasses as I clock the circle, preferring my own mantra, just keep walking.
A guy in a body-hugging, blinding neon green t-shirt is doing sets of jumping jacks, push ups and leg lifts. I look away, my effort is such a trifle compared to his. A woman, her young brown skin still supple, walks the circle in the opposite direction—the wrong direction, if you ask me—so that each time we pass each other, we are forced to murmur some sort of acknowledgement or smile with compressed lips and nods of recognition, until finally we end up pretending we don’t see each other.  She fiddles with her ear buds while I check my fitbit® steps, our shoes sending up small puffs of dirt as we pass.
Today there are clusters of children, small toddling children, running around. Their balls are bright and bouncy, discarded on the grass, their mothers are bright and bouncy too, chatting happily together by the picnic tables. I remember some of my happiest days, sitting with other mothers, our feet in the sand, the sun on our knees, chatting while we watched our children scramble all over the play structures. Except for the occasional squabble—he threw sand in my face—it’s an almost guilty pleasure.
A little boy runs across my path, his jet black hair flopping ala the early Beatles’ as he speeds toward the fountain. In his dust, an even smaller dark-haired toddler follows, his arms straight out at his sides. He’s not pretending to fly as I think at first, he needs his arms, like wings carrying an airplane along, for balance. Plop. He falls on the dirt path ahead of me, but just as quickly is up again, racing after the bigger boy who is climbing up onto the low wall surrounding the fountain.
I look quickly to the right, making sure the women are watching, but I don’t dare take my eyes off him as he sits there, reaching out towards the water, for long. The littlest one has made his way up onto the wall now too and once again, feeling like a nosy little old lady, I check on the mothers. Just to make sure. This time I have to do a 360 to see them over my shoulder as I walk. The water in the fountain is only a couple of feet deep but I know it only takes a couple of inches for a child to drown.
Finally, finally, one of the young women calls out and starts running across the grass. I look back at the fountain and the little boys are just sitting there, gazing happily around. I just keep walking as their mother reaches them. I watch as she kneels down, puts her arms around them in a group hug, and while it’s yards and yards away, I know exactly what she’s saying.
I’ve been walking in circles for fifteen minutes now and the guy in the bright green athletic shirt is still going through his sets. I can see his arms and legs moving so slowly now it’s like he’s working out in a bath of molasses. I can almost feel the pain of each and every move his muscles make and I look away again. And just keep walking.