Above Ground on the London Underground–Day 3: Dreaming of Osterley 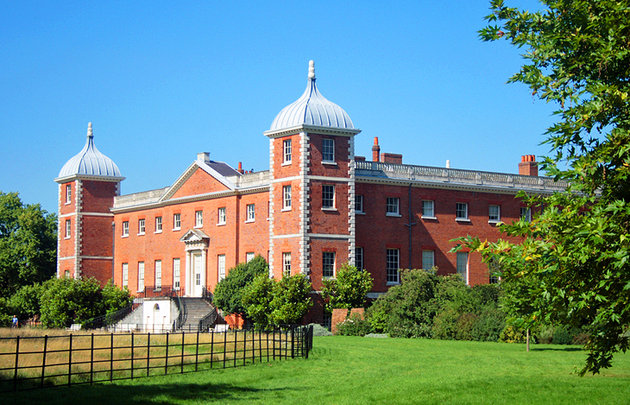 I’m taking a virtual walking tour ‘above ground’ on the London Underground. Using my Tube guide and my fitbit® device, my goal is to walk at least 10,000 steps a day roughly following along the Underground route, reporting back here on Fridays with my findings. We're on the Piccadilly Line. This is Day Three:

My last 10,000 steps took me from Heathrow to Hounslow where I stayed at the Osterley Park Hotel, not to be confused with Osterley Park and House, the sumptuous National Trust property dating back to the mid-1500’s that I’ll be virtually visiting today. Although, if this google comment from Lindsay H. is to be believed, the Osterley Park Hotel might as well be that old. “The motel part is terrible, dingy, not even worth the cheap price. The wifi can hardly stay connected long enough for me to write this message. The mattress was the all time worst, I could feel every single spring and sunk in immediately, and I weigh a standard 65 kg.”  Yikes. At least I’m well fed, Chris took the time to say “It gets 4 stars simply because of the amazing food.” That being said, I’ve included contact info at the end of this post, should you want to check the place out more completely. The one thing the hotel does have going for it is its proximity to the palatial Osterley House. It’s just a  quick 1.3 mile walk via Thornbury Road to the Osterley Estate, a mere 3300 steps per my Fitbit.® 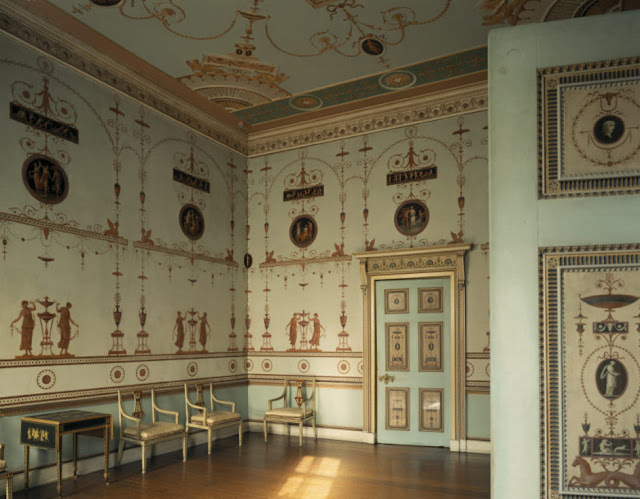 While it sounds like the hotel could use a bit of a remodel, the Osterley Park and House got its make over in 1761 by celebrity architect Robert Adam. Adam, a neoclassicist, was a bit of a control freak. Not content to merely design grand country houses that put Downton Abbey to shame, Adam had a hand in every aspect of the home’s design, from ceilings to carpets, picture frames to candelabra. I’ve heard it’s spectacular. 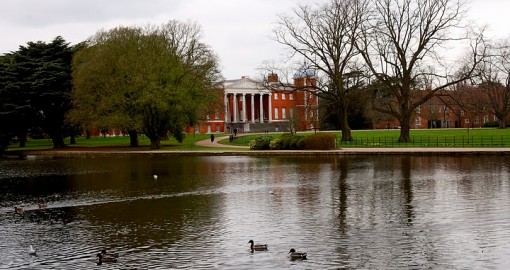 While (or whilst as the Brits would say) I can’t wait to see the Georgian masterpiece where the uber-wealthy Child family made their home from May through November— as well as getting a little brekkie because I’m starving—I can’t help slowing down and indeed, coming to a full stop, when I’m waylaid by the most charming looking bookstore smack dab in the middle of my route. The Osterley Book Shop. Now I’m really salivating. 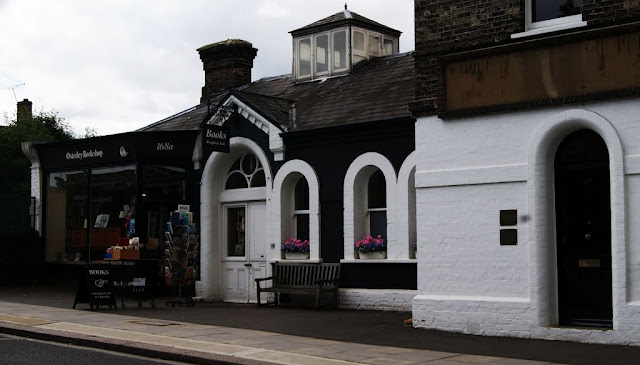 How can I not stop in? There are flowers in the window boxes, a welcoming bench outside, and a hand that points me in the right direction. Of course I’m going in! The shop used to be a railway station. Can you tell? I really love the repurposing of old buildings; here in the states we’re a bit more prone to tearing things down and starting over. Or leaving them to rot. How many old buildings in your town have been left, empty, to wither and die? 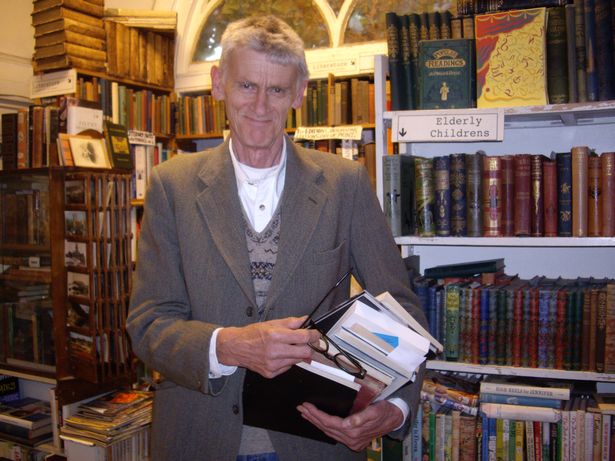 This is Tony, a self-described former hippie’

Inside the shop—so a little birdie named GetWestLondon tells me—I’ll find the owners of almost half a century, Tony & Penny who are likely enjoying tea in the back room, leaving their customers to browse the books. The couple are a pair of self-described old hippies and from the looks of Tony’s happy smiling face I can’t help but wonder if he smokes the tea as well as drinks it. Or maybe that’s just the look of a man living his dream. The pair bought the station  house back in the 1960’s after graduating from art school to use as a studio but when local regulations required the space be used as some sort of retail establishment, they started collecting and selling second-hand books. I don’t know about the art but the book store mushroomed from there. Like all bookstores these days, in order to survive they’ve got to do more than sell last year’s best sellers and Penny and Tony offer eggs from their own hens. 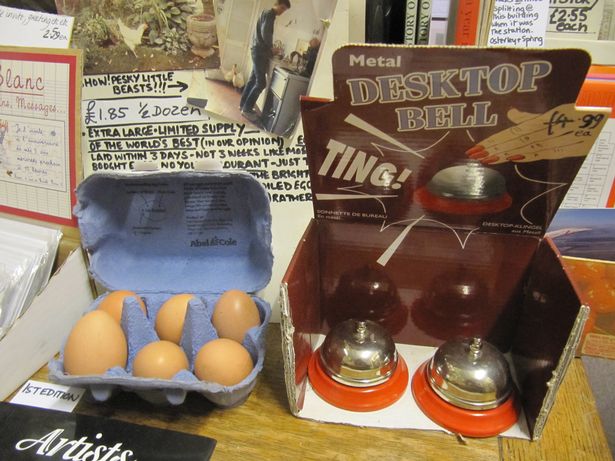 They also do a nice business selling hard to find books. If you’re hunting for something in the Elderly Childrens category—50 year old men who refuse to grow up?—they may have just the thing. Looking at those eggs has made me really hungry; I wonder for a nano-second if I’ll be able to get a full English breakfast at Osterley but I know that’s just wishful thinking. Still, I better get on. Tony and Penny say all I’ve got to do is take a few steps out their door and to the left, and Bob’s your uncle, I’m there. They’re not far off the mark, I can see the gates up ahead where the Thornbury Road crosses Jersey Road. I’m there in what they’d call a tick and my fitbit® calls 250 steps: the entrance to Osterley. 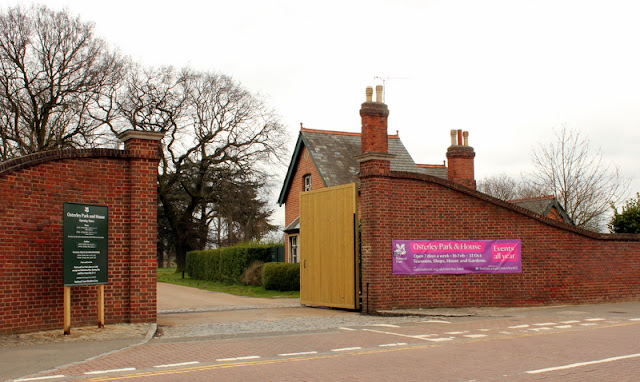 There’s still quite a walk, beautiful and bucolic, complete with a cluster of Charolais cows, before we get to the main house. Hungry as I am, I do all I can not to think of Beef Burgundy! 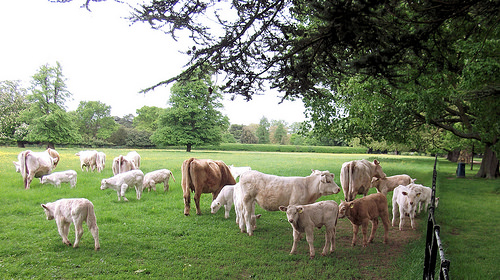 I have to pinch myself to keep from imagining the Bennet sisters walking along the path, or striding across the fields in their Regency gowns. First things first, I find the Stables. No, I don’t want to go riding. Like Elvis, the horses have left the building, and the stables have been converted into a really adorable looking cafe. 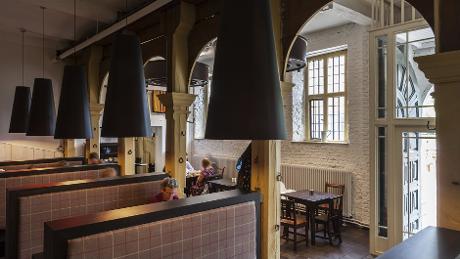 The Stables opens at 10am and I should be able to get a scone with jam and cream and a good hot cuppa. 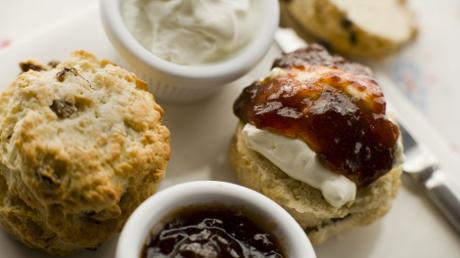 Time to walk off some of that sweet cream and jam! While I still have the energy I think I’ll take a saunter around the grounds, hitting the summer house filled with lemon trees, the garden and the beautiful ponds. The route, mapped by the mappy types at hounslow.gov clocks in at 1.5 miles, or another 3500 steps. 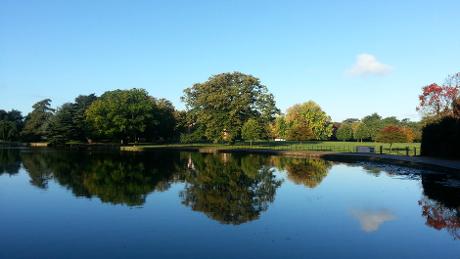 On Sundays, between 12 and 4 pm, the lake is filled with canoes. Out of the blue, I feel bluer than the sky to think of couples together out on the lake while I’m all alone so I insert my husband in the scenario to paddle me about a bit. When it comes time to tour the inside of the house he’ll vanish conveniently into the ether. He’s just not that into touring country estates and the last thing I want is to feel rushed while he tries to suffer along politely. Nope. Instead I’ll zap him back to LA sooner than you can say Bobs your uncle so I can ooh and aah over how the other half used to live, in peace. What’s that cliche? Oh right, they just don’t make ‘em like they used to. Walk with me, take a look. 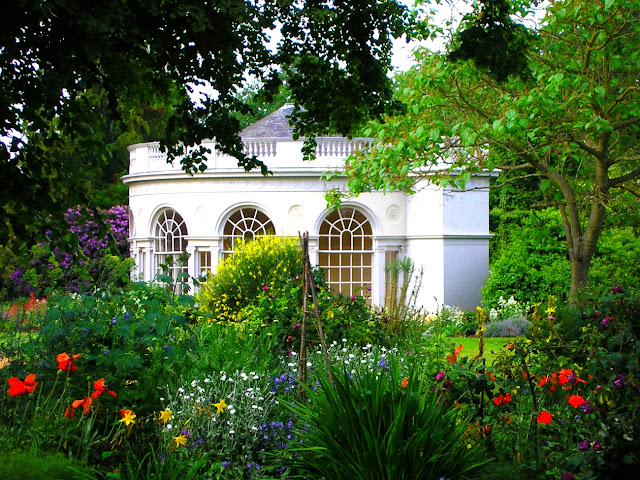 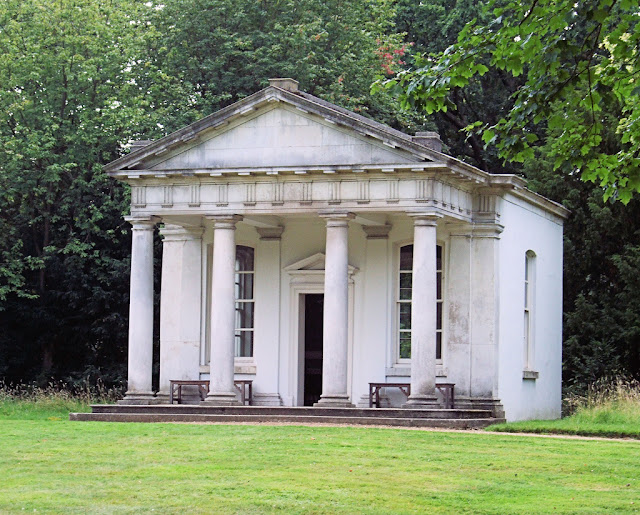 The Temple of Pan 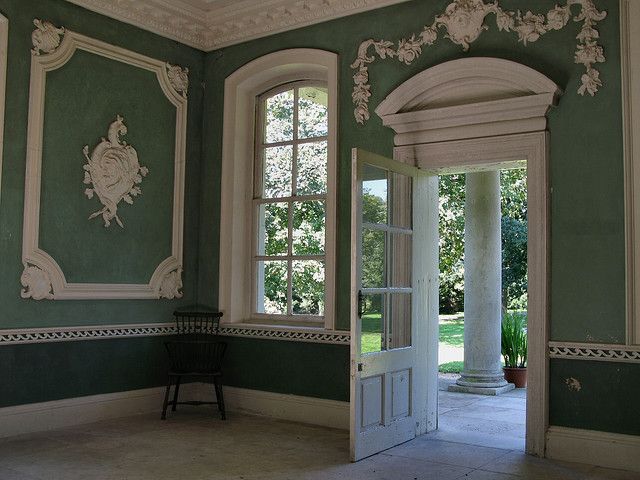 Inside the Temple of Pan 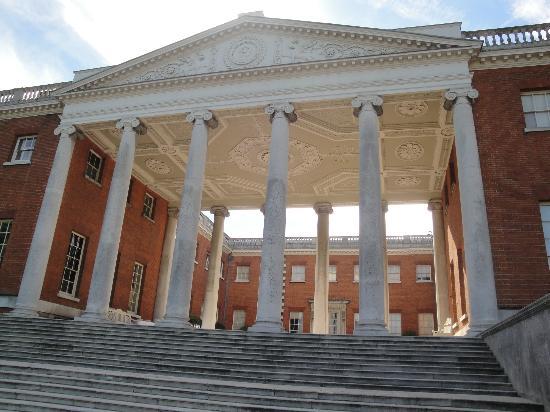 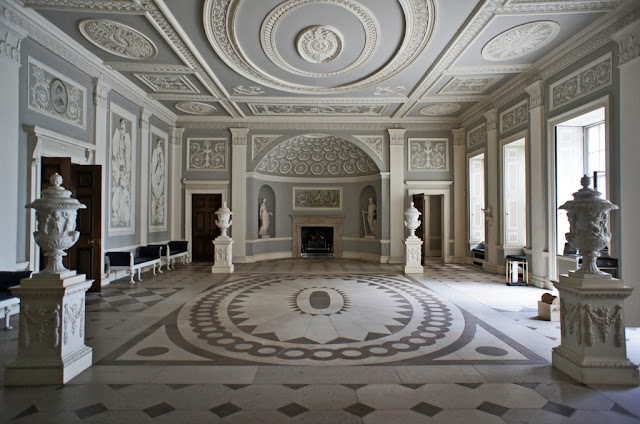 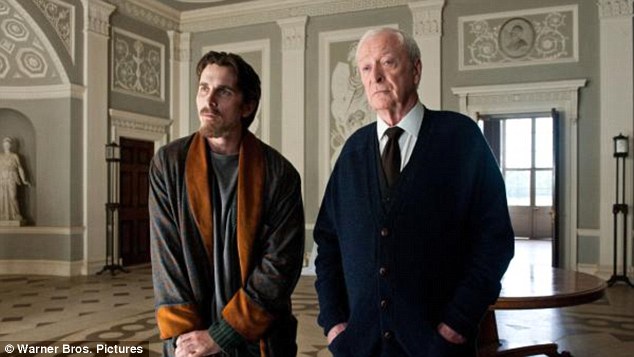 Holy Batman! What are Christian Bale and Michael Caine doing here? Right, Osterley House actually played Wayne Manor in The Dark Knight Rises. Do you think Bruce and Alfred are discussing how to warm the place up a bit? With all the moolah he has, you’d think Bruce Wayne could afford some furnishings. Okay, okay, as you can see in the larger image, the room is a gallery with bench seating along the sides, probably meant for balls as befits the Child family’s champagne and caviar lifestyle. Let’s waltz through the rest of the house and trust me, I’ll be walking right past my 10,000 steps per day Fitbit® mandate. The place is massive. Square feet? A zillion. 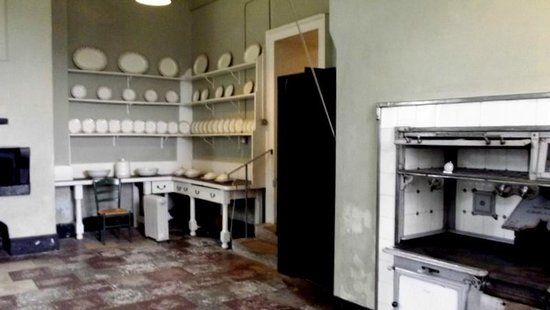 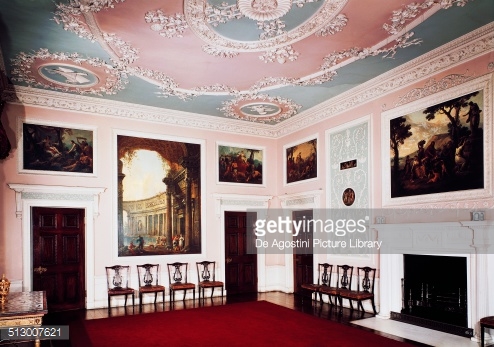 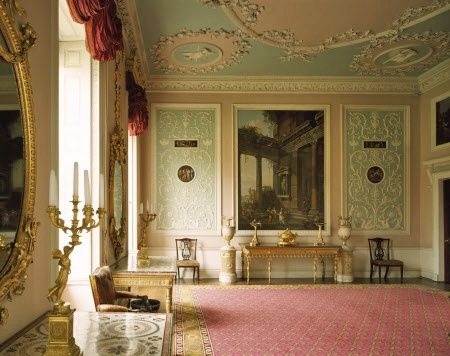 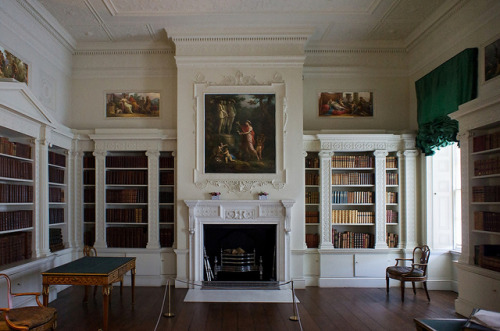 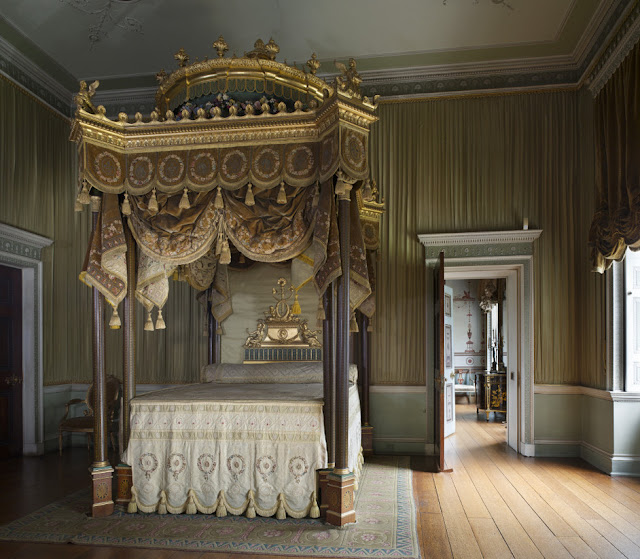 Seriously, I’m thinking about skipping a hotel tonight. I’ll just grab a book from the library and crawl up into this bed fit for a queen and drift off to sleep. Someone send Mrs. Bates to wake me, will you?

Have you seen the real Osterley? Give me a shout in the comments section.