Above Ground on the London Underground—Day 42: Cockfosters .... the end of the Piccadilly Line! 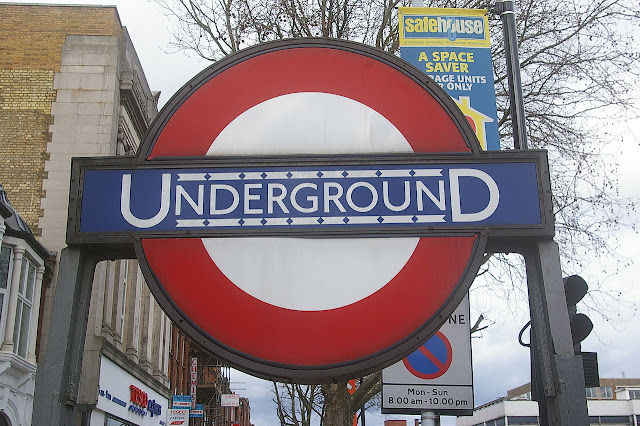 If it's Friday we must be back in London. Every Friday I take a virtual walking tour ‘above ground’ on the London Underground. Using my Tube guide & my fitbit® device, my goal is to walk 10,000 steps a day roughly following along the Underground route, reporting back here on Fridays with my findings. Here are the previous days. We're wrapping up our walk tracing the path of the Piccadilly Line. This is Day 42.

We are getting to the end of the Piccadilly line and let’s be honest, we’re in the burbs. The last stop on the line is Cockfosters—I know, here in the states we would never be able to call anything Cockfosters without incurring a rash of nasty jokes—is almost 7 miles up ahead. 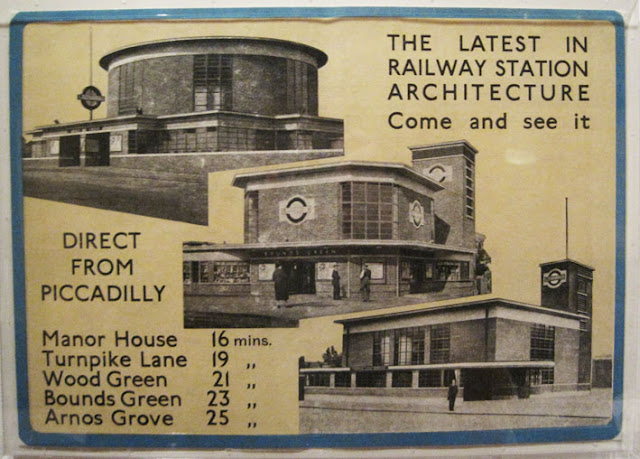 For now, since there's not much to see in the way of attractions and points of interest, let’s just take a look at some of the stations along the way. The stations, all designed by Charles Holden, are of historical architectural interest in their own right. 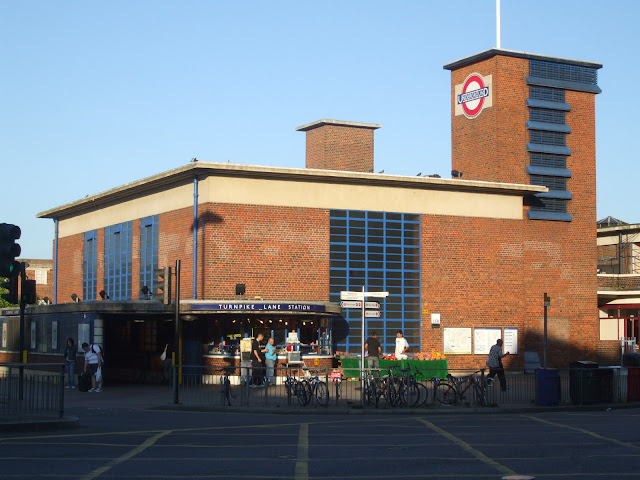 
The Turnpike Lane station opened in 1932 and at the time it set new aesthetic standards. Designed by Charles Holden, the station is an example of the Modernist Style popular in the thirties. 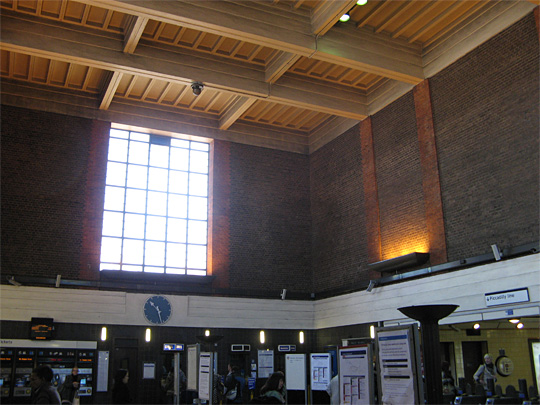 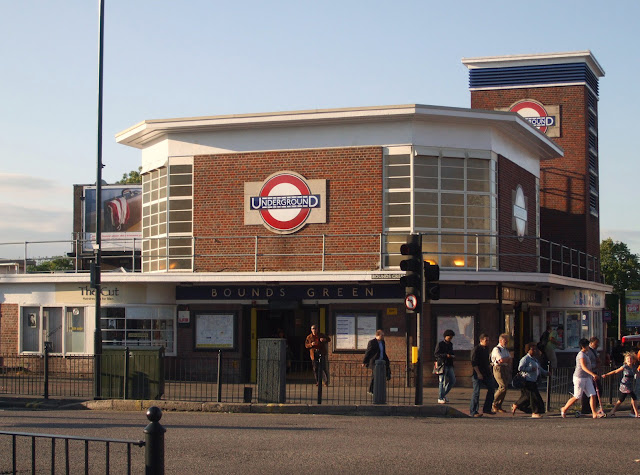 Bounds Green, which also opened in 1932, is another example of box-style Modernist style. Holden eschewed decorative elements—the Victorians would have hated him—and believed that form should follow function. 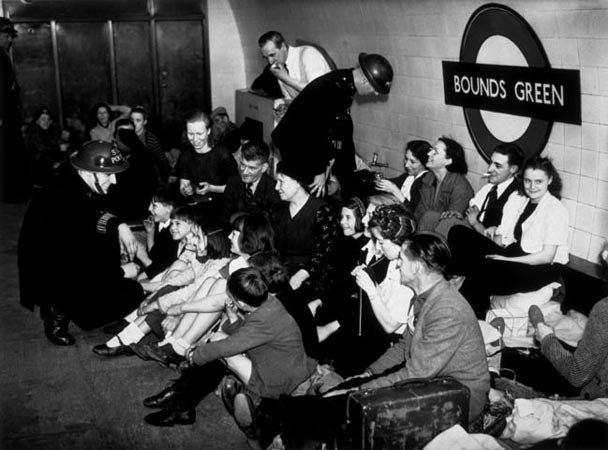 During WWII Bounds Green station was used as an air raid station. In 1940, during the blitz, the Germans dropped a bomb on the neighborhood to the north of the underground, causing a portion of the station to collapse and killing seventeen people. I’m struck by the cheerful expressions on the everyone’s faces. Chalk it up to that stiff British upper lip? 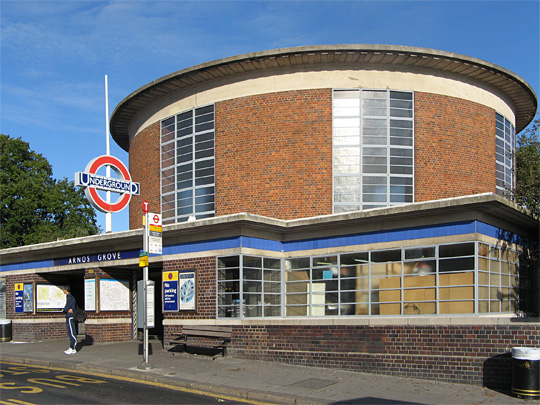 Between Bounds Green and the Southgate Station is Arnos Grove, recognized by the Guardian as one of London’s 12 Great Modern Buildings. Also designed by Charles Holden, this station was inspired by the Swedish architect Gunnar Asplund design for the Stockholm City Library, below. 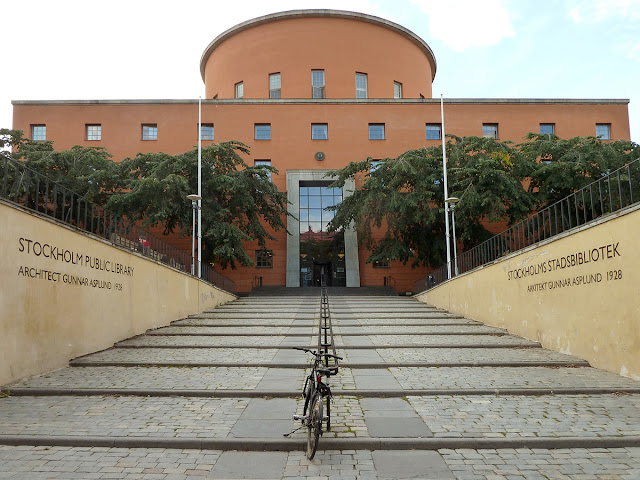 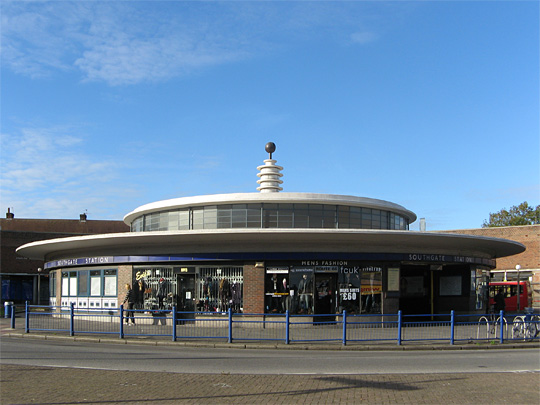 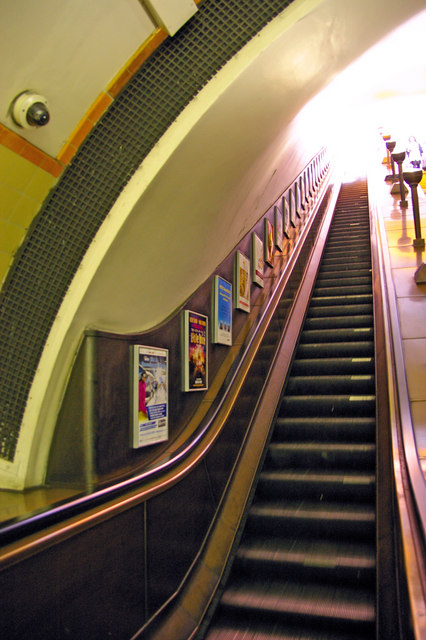 The interior, including escalators, has been remodeled with a mind to preserve its historical details. The station is often used in period films such as 1999’s The End of the Affair. 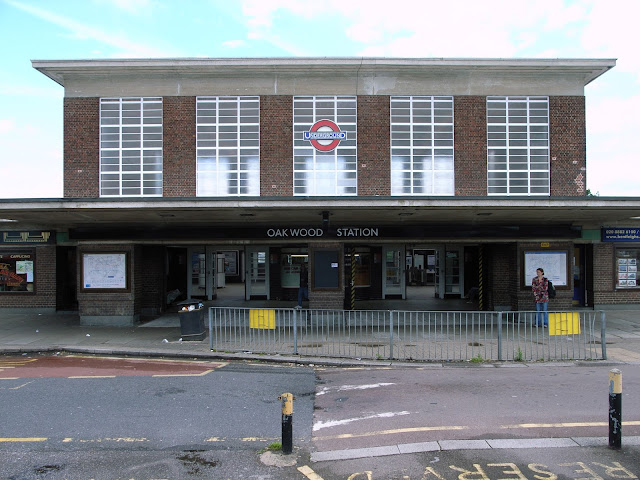 Back to the boxlike style Charles Holden’s Oakwood station is a particularly bold interpretation when you see the interior. 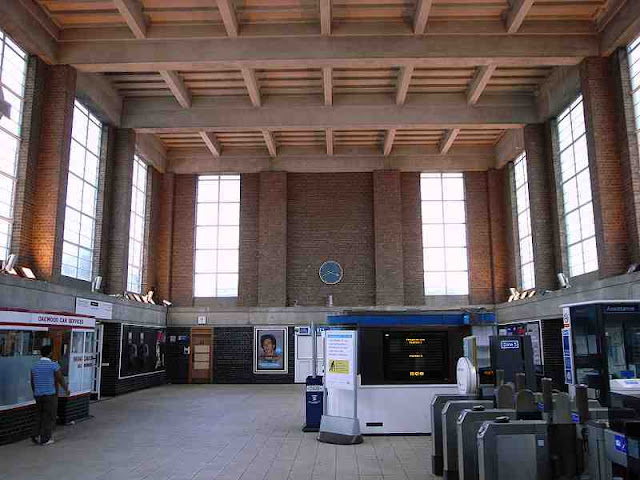 Similar to the Turnpike Lane station, the Oakwood Station interior has a great many more windows and while extremely modern, mirrors classical architecture. 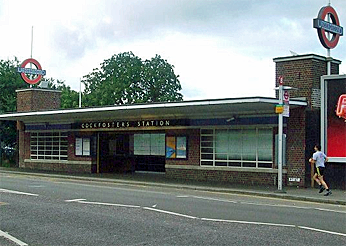 That brings us to the end of the line. Cockfosters, the northern most station of the Piccadilly Line, also designed by Charles Holden in the European Modern Style, using brick, glass and reinforced concrete. Much less grand than Arnos Grove or Turnpike from the outside, the inner structure with its concrete canopy construction is massive, modern and quite lovely in how it allows the light and air to come in at both ends. 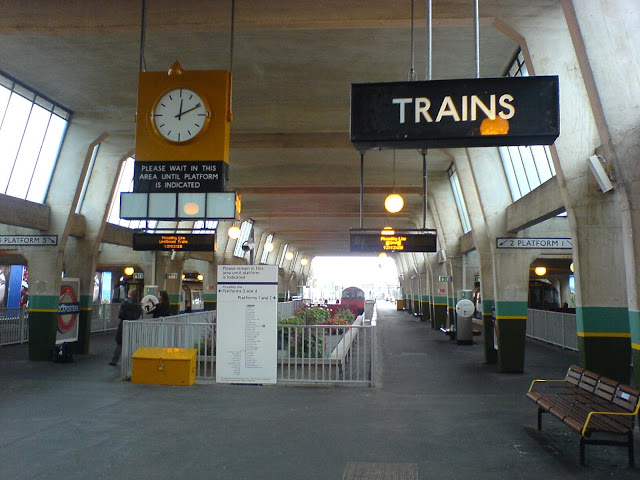 And now, after 42 posts and almost a year, I’ve taken you with me along my journey above ground on just one of London’s underground routes: Piccadilly, from Heathrow where I landed back in October of 2015 with Daniel Craig and Colin Firth to today’s solo trip to Cockfosters. I hope you’ve enjoyed the journey as much as I have. Now what? Which of the remaining dozen Underground lines to follow and where to start? I can’t believe it’s taken me this long just to cover one of the lines; I wonder how old I’ll be when I’m done!

It's British Isles Friday when I link up with Joy Weese Moll I blame Joy for getting me started on this crazy journey!