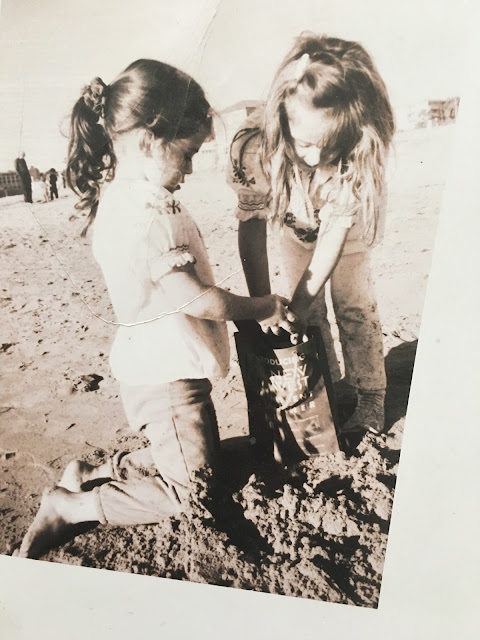 My beautiful nieces. They're 30 now. And still beautiful.

I got my first camera when I was ten. A Kodak Instamatic. I didn’t ask for it, not that I recall. It’s not like I was begging for a Brownie, dreaming of taking pictures like a mini Ansel Adams, not that I had any clue who Adams was. Nonetheless I was thrilled when I unwrapped the camera. A birthday gift from my father even though he was out of town on one of his frequent business trips. It felt like a bit of magic, his present being there while he was absent, thousands of miles away. I lacked the imagination to realize it was my mother who went to the store, my mother who bought the gift, my mother who wrapped it. My mother doing the work, my father getting the credit. I was devastated he wasn’t there on my big day until his call came in.

While I was listening to my father’s voice on the other end of the line telling me how much he loved me, how sorry he was that he had to be away, how much he hoped I’d enjoy this special gift for a special girl, my mother placed his prettily wrapped gift on the telephone table. To this day I don’t know which it was, the gift or my first ever long distance phone call, that wiped the blues away.

He must have spoken to my mother, probably even asked to put my brother and sister on the line, but to my mind the long-distance phone call—an expensive gift in the 1960’s in itself—was all mine. Undoing the wrapping carefully, it was the hinged camera box I fell in love with, two sides that opened out from the center, crafted of heavy yellow cardboard, satiny and smooth to the touch. Possibly I lusted after the packaging more than the camera itself, nestled in its specially carved out compartment. I slipped the slim instruction manual from its shallow rectangular indentation, hesitant to turn its pages, I put it back. I popped the film cartridge in and out of its built in depression. Like the annual back-to-school supplies, cartridge pen and refills, pencils (HB #2), compass, ruler, arranged in a pencil box, set neatly on top of a stack of fresh notebooks on the first day of school, the camera in its box was perfect as it was, pristine. I didn’t want to mess it up.

I wish I could say that camera transformed my life. That I spent the following weeks and months traipsing around our Niagara Falls neighborhood taking pictures every chance I got. I don’t remember doing any such thing. Looking through our old family photos, only a few of my snapshots remain. A faded, poorly focused snapshot of our cat reaching up to where my brother’s hand dangled some sort of kitty trinket. On the back, in my childish printing, only ‘Ginger Playing’.

Years later, my dad would give me his old AGFA 35mm camera. I was an adult by then, but again, I think I loved the trappings of the camera more than the complex piece of equipment. A shiny hard brown leather case, fitted to the camera with its silvery knobs and dials, a narrow leather strap with a small buckle. Lined with cream-colored velveteen, the leather case was designed to stay in place, only the part that covered the lens fell away, swinging beneath the camera as you worked the dials, the lens ratcheting out. There was a simple satisfaction in removing and replacing the case, snugging it over the camera body, snapping it shut. I copied my father’s habit of wrapping the strap around and around the camera, making a nice tidy package.

I had little idea of what to do with that AGFA—an Optima I think—how to make sense of f-stops, apertures, shutter speed, focal length and ISO.  Struggling through the instruction manual, browsing some photography books my brother earned from his stint at Time Life, I took some black and white photos of my little nieces. Instead of dropping the rolls of film off at Fotomat for 4x6 prints, I took them to a photo lab and asked for proof sheets. When they were done, several days later, I circled the images I liked with a wax crayon as if I were a pro. In the end, I’m neither a pro or the technical type. It was difficult for my head to hold onto the information and after a few happy accidents where my nieces were relatively clear in the foreground and the background was softly blurred, I put my photographer’s hat away.

Lately, like everyone else, I’ve been taking pictures with my iPhone and finding the advanced technology of today’s smart phones more than meets my basic skill level. The camera app is magically simple enough even for a tech dummy like me to use. Since photography is mostly a distraction to make my daily 10,000 Fitbit steps a day bearable, I rarely take pictures of family and friends. Instead when I’m out walking, I use my phone to shoot houses, buildings, trees and whatever else piques my interest. That works for my inner introvert. Ever notice you don’t have to ask places and things to stay still and say cheese?

I don’t need a wax crayon to circle the images I like best, I simply tick the heart box and send the photo to the favorites file. I crop them, edit them myself with a swipe of the finger, no tech wizardry needed. No need to print them, I simply post them to my Instagram account for all the world to see. I wonder what my father—the type of man who winced and looked for excuses when the neighbors would invite him and my mother over to view their vacation slide show—would make of that?