Above Ground on the London Underground: A half a mile & a world away from Grenfell Towers 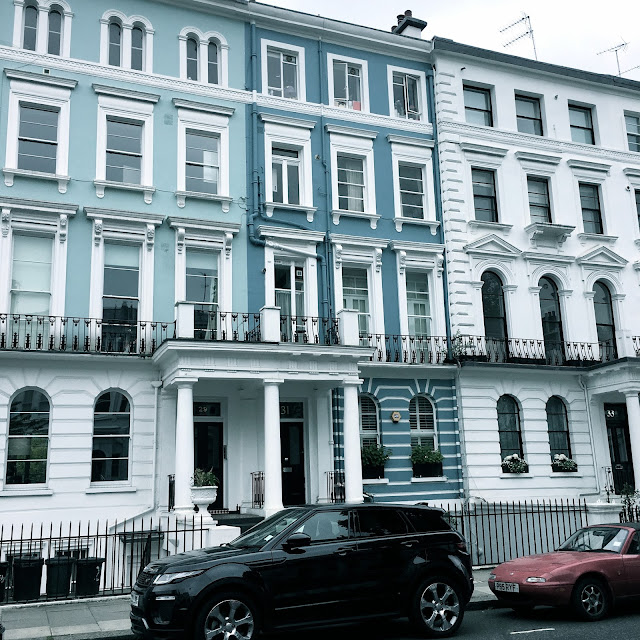 What a difference a few blocks make.

Another heartbreaking week for England, and Londoners in particular. Watching BBC World News while the 24 story Grenfell apartment building went up in flames was horrifying. Thinking about all the people, families with children fast asleep in their beds as the fire consumed the tower, floor by floor, heart-wrenching for all. Reading the tweets put out by a hateful few, immediately blaming terrorists, was sickening, disturbing and depressing. 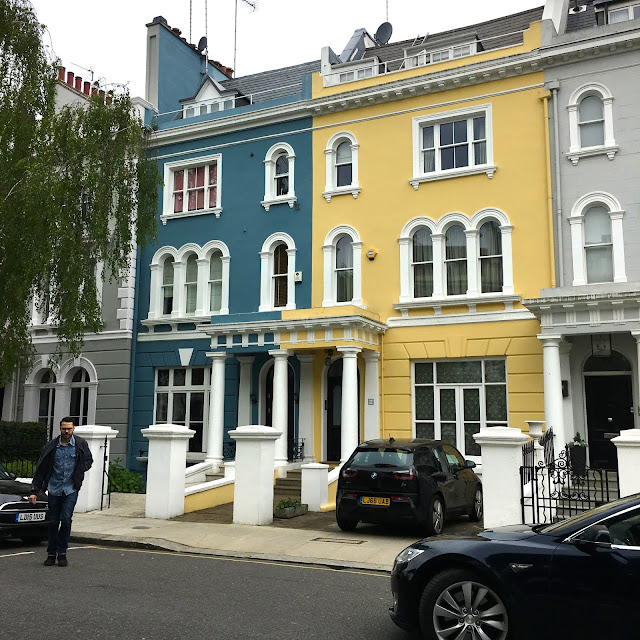 Elgin Crescent is just a few blocks away from Grenfell Tower

As I prepare this post, there are 30 confirmed deaths and many, many people still missing. The death toll will surely rise—some say as high as 100—but it's clear the cause is not terrorism, but negligence on the part of the council's building management that is to blame. The building, situated in an otherwise fairly affluent area, is council housing, flats allocated for the unemployed and underemployed. 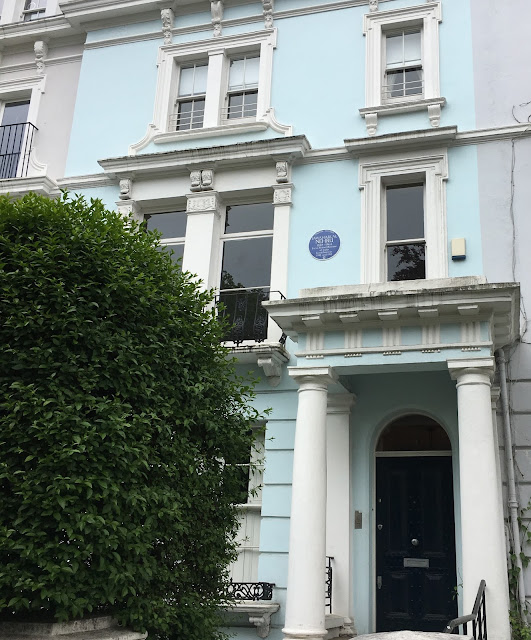 A very different world from the nearby Nottinghill and the tony Elgin Crescent which my husband and I visited on a trip to the Portobello Road market. I fell in love with the handsome row houses, pristine and perfectly maintained. 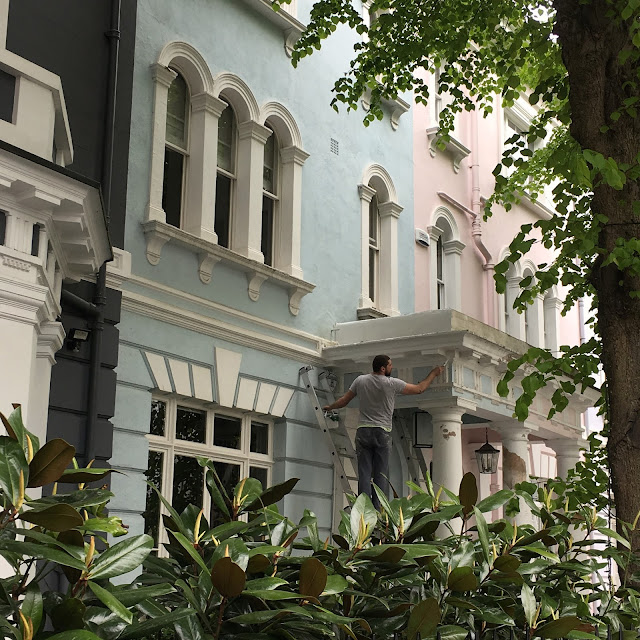 An Elgin Crescent row home getting a fresh coat of paint.

Elgin Crescent is an especially lovely street. Many of the houses are painted in pretty pastels and I found myself thinking, ooh, I could live here! Except I couldn't. A quick look online revealed a one bedroom loft flat for sale for £1,100,000! 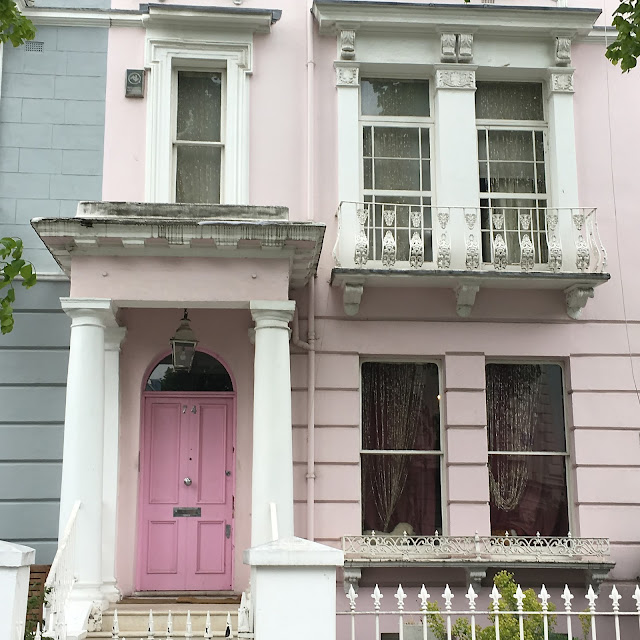 Pretty in Pink ... but it needs a touch up too.

It's a touch unsettling to know that just a few blocks away—less than half a mile—there was a very different kind of housing, catering to people of very different means than those who can afford Elgin Crescent. In Elgin Crescent, homes are maintained, cared for, kept up. They mostly get painted when they need to be painted. Tragically, at Grenfell, maintenance, left to the council, appears not to have been as high a priority. 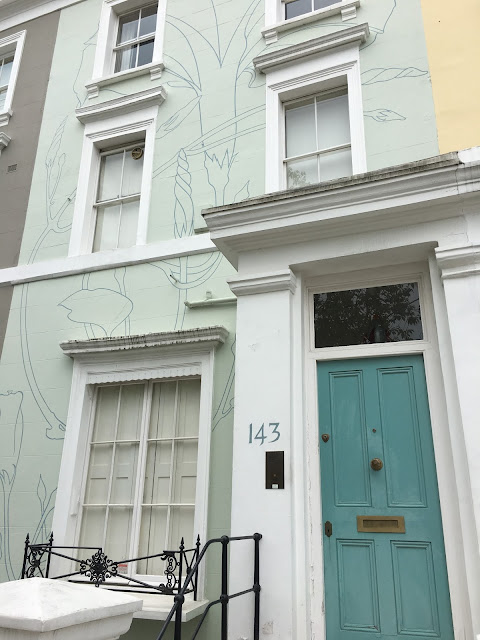 The main reason a kitchen fire on the fourth floor blazed so fast and furious is because the cladding used on the building is a material that has been banned in the US for failing to meet safety standards. It wasn't fire resistant! Fire resistant cladding would have cost more! Can you imagine making that kind of cost cutting decision gambling whether the building would go up in flames? Compounding that is the complaint that there weren't enough sprinklers on the floors and/or in the flats themselves, the alarms either didn't go off properly or weren't loud enough to wake many residents until it was too late. 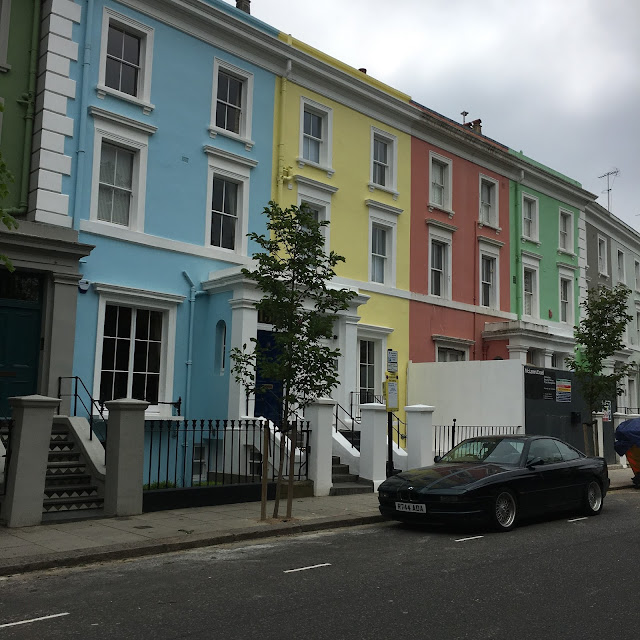 A safe place to live shouldn't have to cost a fortune.

Simply a horrible catastrophe that could have been easily prevented. The Queen has visited, the Prime Minister has called for an investigation and Scotland Yard is now doing exactly that. The council has already indicated they won't be using that material again; but for those who lost their lives in the blaze, and the friends and loved ones they left behind, that is far too little, and far too late.


Ironically residents of both the posh Elgin Crescent and Grenfell Tower would likely have used the same Underground Station. The Latimer Road Station.

Here's how to get there: