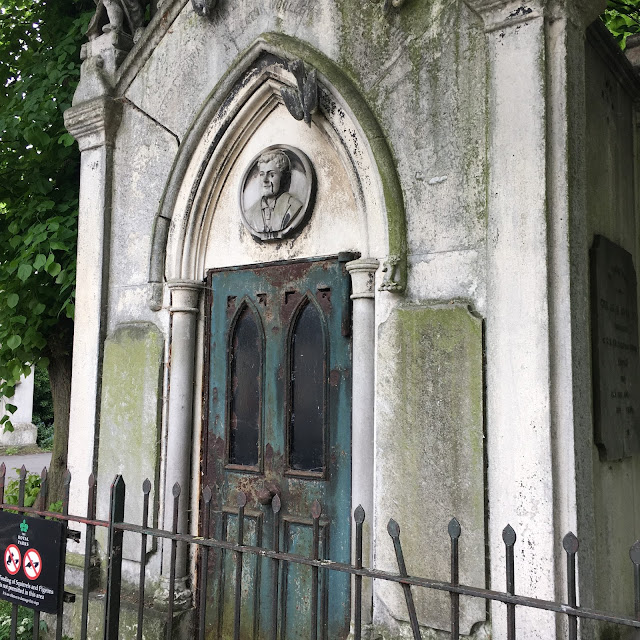 If you've been following me for awhile, you know I've been fantasizing about a trip to England for ages. In fact for the past year or so I've been posting a virtual tour of London under the heading Above Ground on the London Underground. My husband and I finally took that trip to London 'in real life' and now I'm back after a month long journey which began in early May. We were in the air flying home when the London Bridge attack took place, we landed in L.A. to worried texts from family. My heart goes out to Londoners and no, the threat of a terrorist attack wouldn't stop me from visiting one of the greatest cities in the world.
💔
This week I've got a few pictures from our visit to the Brompton Cemetery in Kensington. One of London's Magnificent Seven, I also visited Brompton Cemetery on one of our virtual walks back in March of 2016 if you want to take a peek. I can so imagine living in London ... except the town wasn't particularly kind with the weather. Arriving at the beginning of May, I don't think it made it into the 60's once which was a bit tough on my California thin skin. 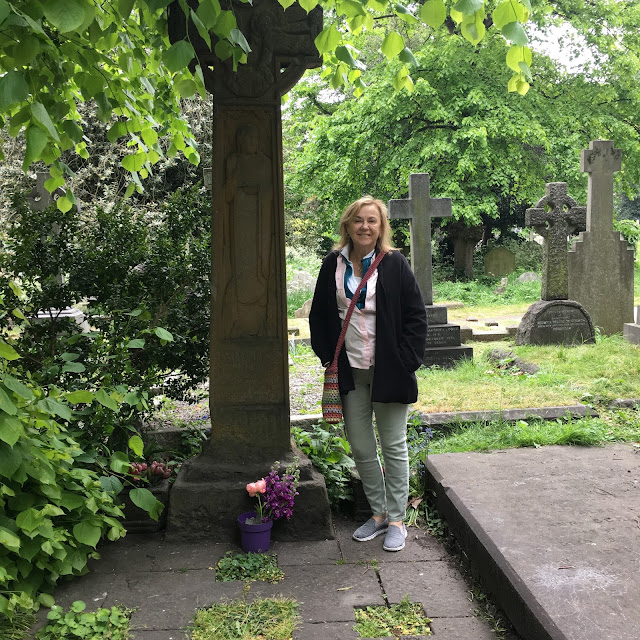 Here I am at Emmeline Pankhurst's grave in Brompton Cemetery. I don't know if you can tell but I'm wearing a tank top, a shirt, a jacket, another shirt and a heavy black sweater.
And I was still cold.

Pankhurst, the noted founder of the British suffragette movement died 89 years ago this month on June 14th. Her grave is easy to miss, there are no special markers, nothing—except for a small potted flowering plant left by an admirer—to indicate that this is the grave of a woman who really did change the world. Like most of the graves at Brompton, the site is in a state of benign neglect, the grass needs trimming, overgrown plants, trees and aging stones eclipse the names of the dead and buried. Seeing Brompton Cemetery in person was spectacular, a wonderful trip back to the Victorian age while the several people we saw walking their dogs and jogging through the cemetery was a reminder that Londoners live in a world that spans the centuries every single day. 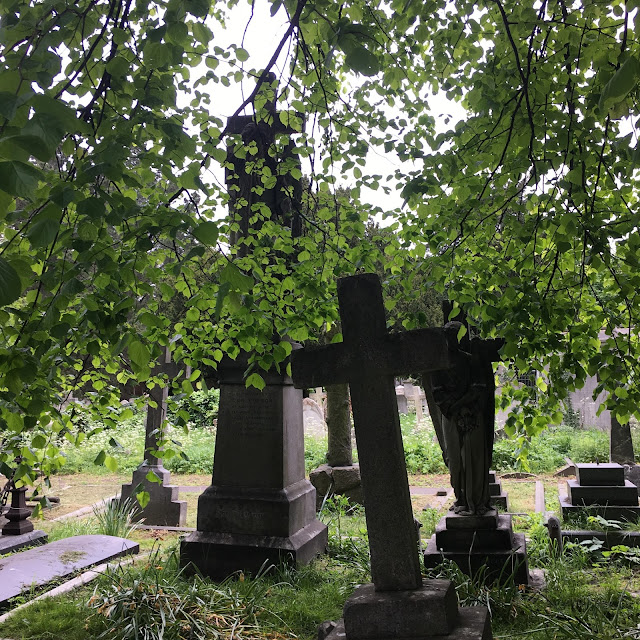 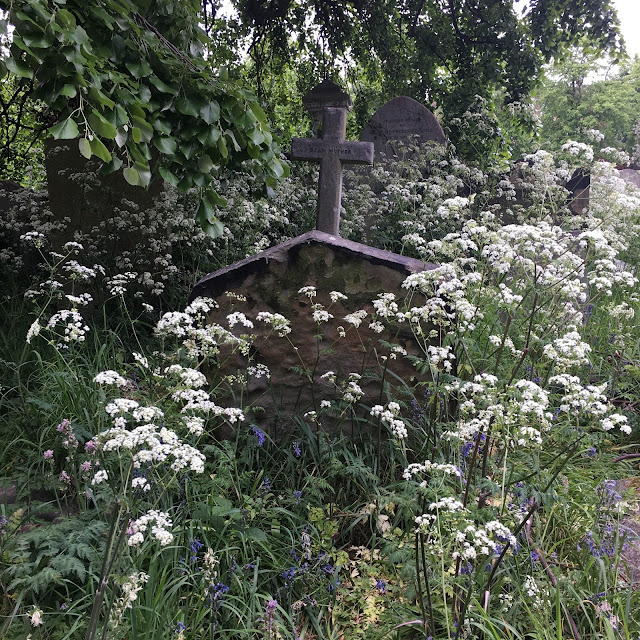 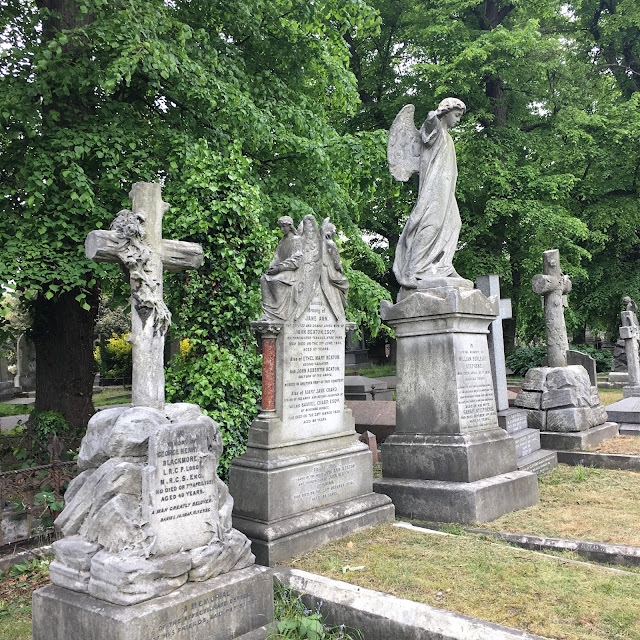 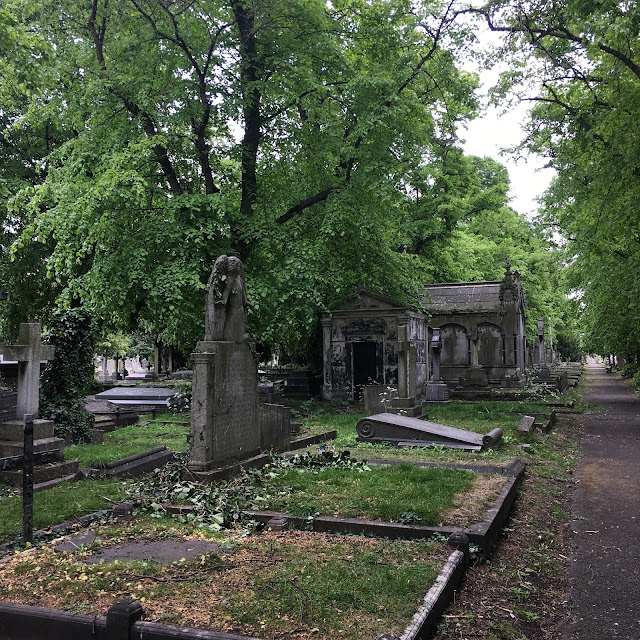 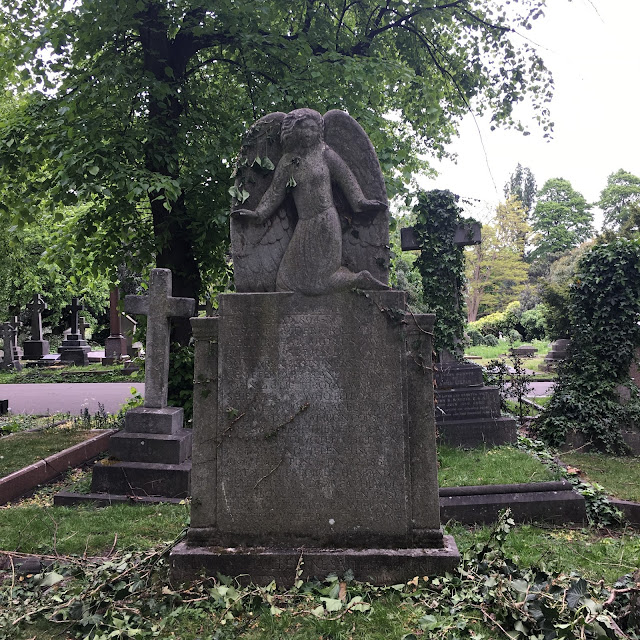 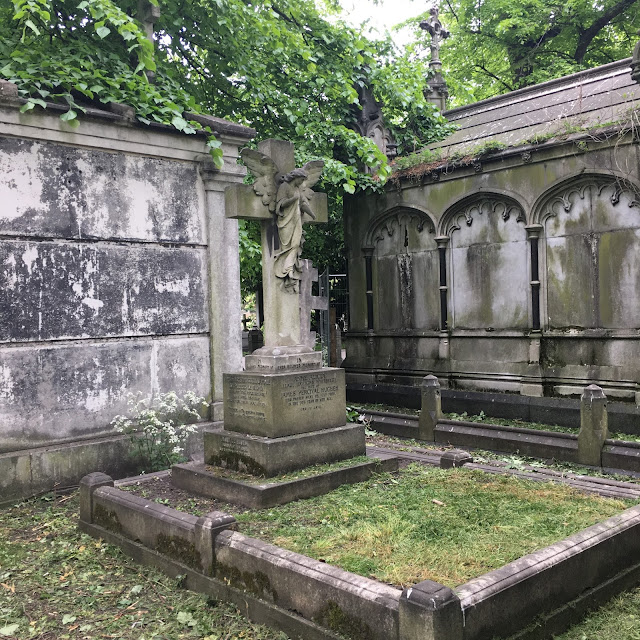 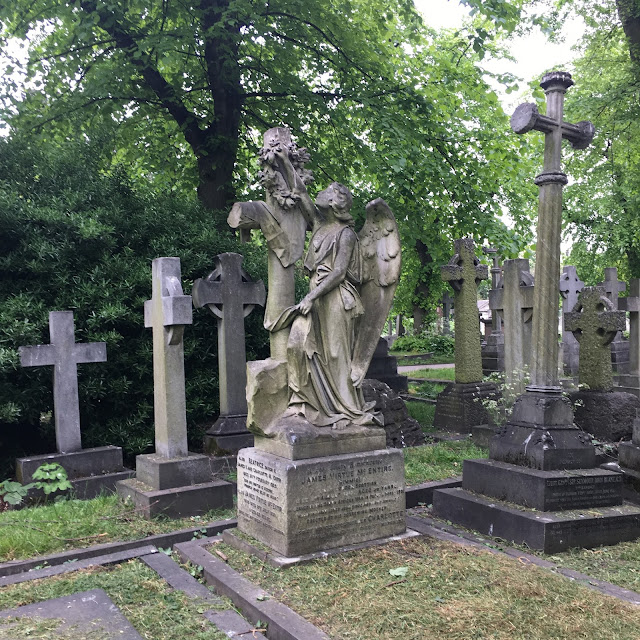 On another day, leaving the Portobello Road market (pictures another time) we walked by a handsome neighborhood in the Holland Park area of Kensington and I noticed an attractive white stone building with the telltale blue plaque signaling an edifice of some prominence. It was the home where both Emmeline Pankhurst (played by Meryl Streep in the film Suffragette) and her daughter Dame Christabel Pankhurst lived. Built in 1860, the five story house is about 4500 square feet, has five bedrooms, 3 bathrooms and has a current market value of about £25 million. Cat sculptures included. 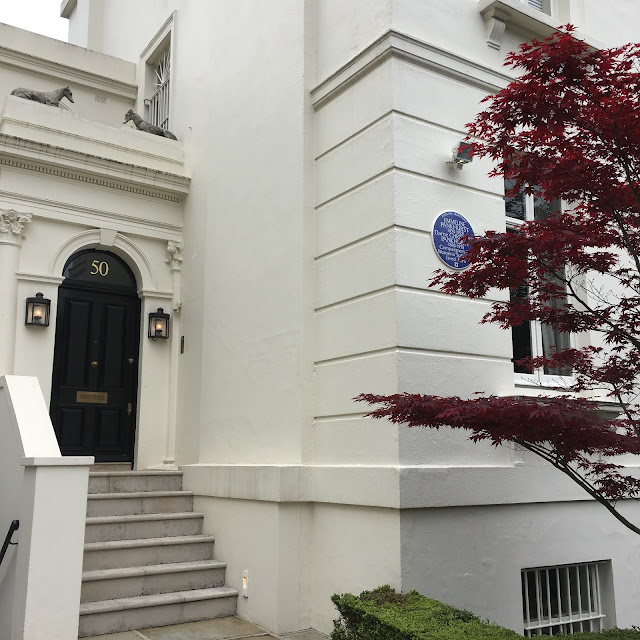 Oh yes, I could live in London! Except for that darn kid of mine. At twenty three, he's grown up and probably ready for a mother in absentia but I'm not.

If a trip to London is in your future here's how to find Brompton Cemetery & Emmeline Pankhurst's home: